Important ones too. Those little letters that make up our names are OURS. We own those ones. They are special! At least they are when we are little.

When starting to teach children their letters it is a fabulous idea to begin with their name letters. Once little ones know these letters, I suggest introducing the rest of the letters in a special order (which you can read here: The Order for Introducing Letters), but this post is just about names.

It is such an important topic it deserves a post all it’s own! And since Quiet Bins are kind of my thing, this activity doubles as a rocking quiet bin too. 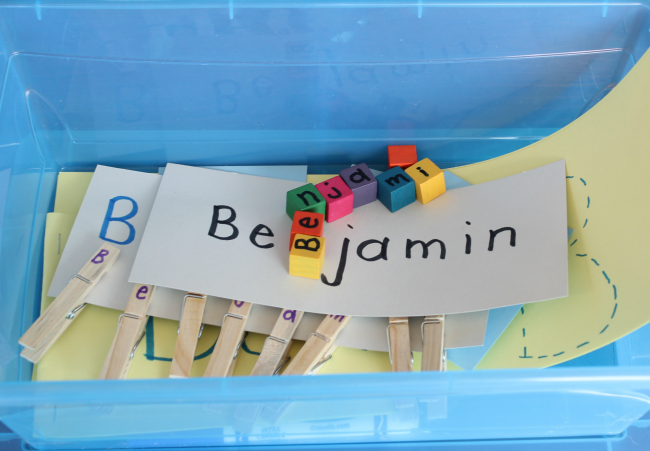 Many names have short forms. My Benjamin often gets called Ben, so I want him to learn both of those names. Ben is obviously simpler, so we have really focused on it up until now. Now that he has those 3 letters down pat, we have began practicing his whole big name.

This quiet bin is a fabulous one for young children to use. The name activities in the bin are sequential, so there is an activity that will be perfect for whatever level your child is currently achieving. 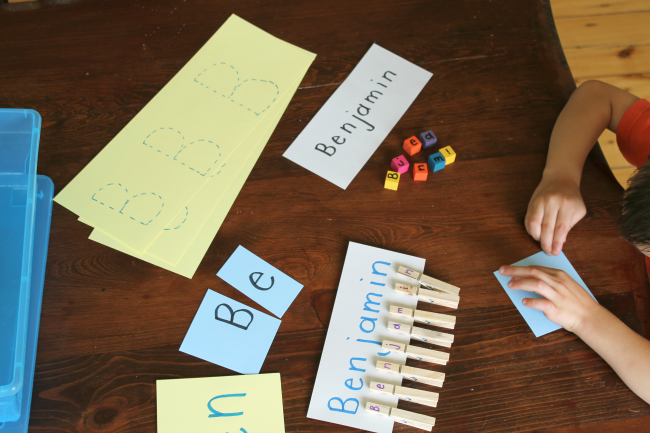 Inside this name activities quiet bin I included:

Ben’s name written on cardstock and chopped up like a puzzle. 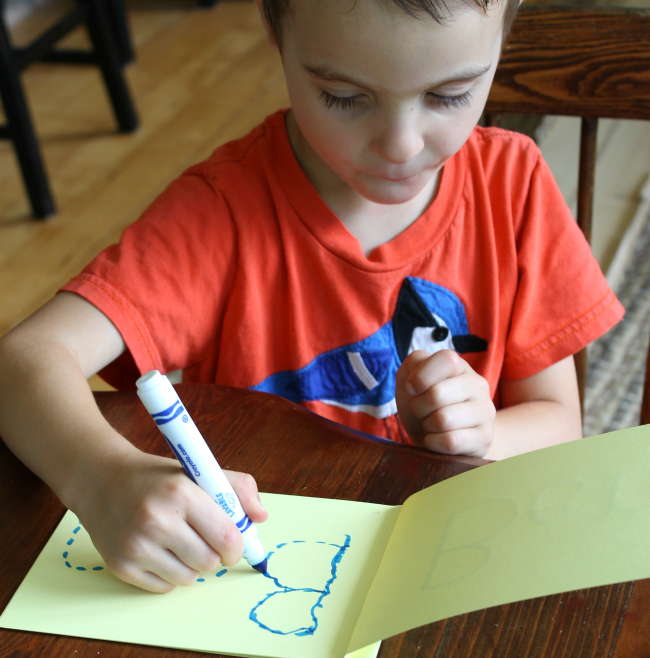 Ben’s name letters written on cardstock for him to trace one at a time.

These are the activities he is ready for with his short name (“Ben”) as he has had quite a bit of time and practice matching and building it.

Funny side note – my Sam, who is 7, has recently learned about air quotes and does them all the time … “know” what I “mean” … he doesn’t do them properly. Just cutely.

Since I am now introducing Ben to his big name — Benjamin — I added in some building and matching name activities that went along with his full name.

Benjamin was written on cardstock and I popped it in the quiet bin with matching letters written on colourful blocks I found at the dollarstore. This activity is ideal for building a name. Slowly we can remove the cardstock and have our little ones build their names all on their own. 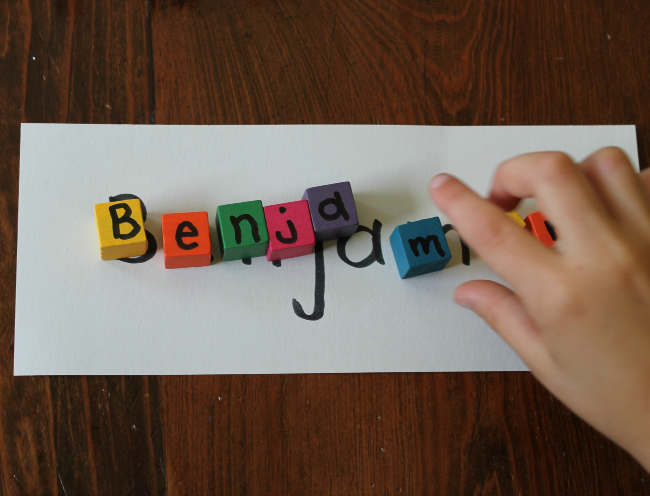 I also put the name Benjamin on a large piece of cardstock with corresponding clothespins. Each clothespin had a letter written of his name written on it. A great activity for matching – and also excellent for strengthening those little hands. 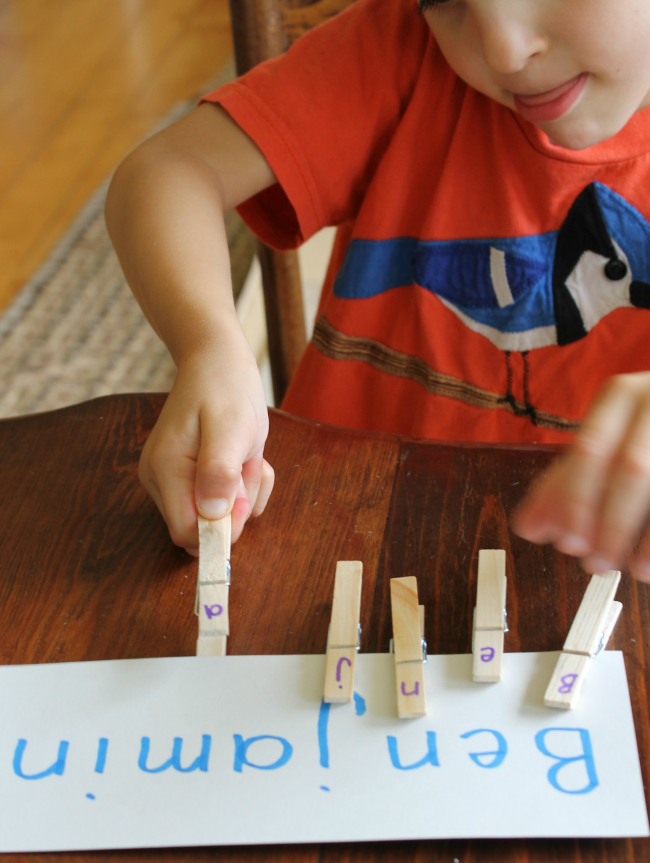 Ben loved his special name bin! He enjoyed all of the activities and especially enjoyed that it was just for HIM. His brother was not going to be sharing that one!

Of course his brother was not as fond of this idea – so I created one for him that had more skills relevant to a 7 year old. It was full of matching and building activities for Sam’s last name, address, and phone number too.

So many possibilities! Oh for the love of Quiet Bins!! 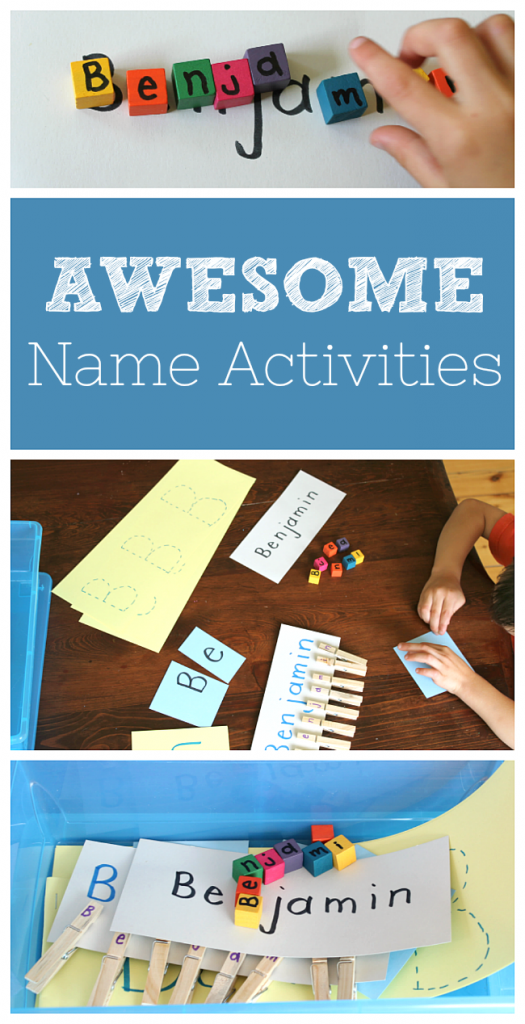 I hope you are having a “fabulous” week friends. Thank you for reading! 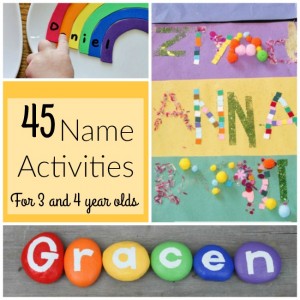 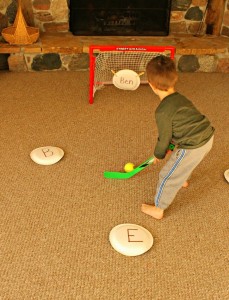 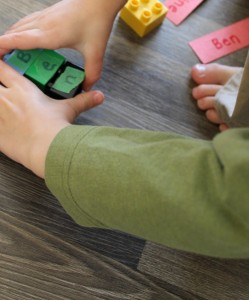 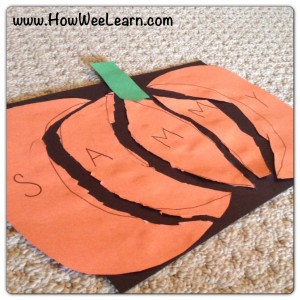 A Year full of Name Puzzles

This website uses cookies to improve your experience while you navigate through the website. Out of these, the cookies that are categorized as necessary are stored on your browser as they are essential for the working of basic functionalities of the website. We also use third-party cookies that help us analyze and understand how you use this website. These cookies will be stored in your browser only with your consent. You also have the option to opt-out of these cookies. But opting out of some of these cookies may affect your browsing experience.
Necessary Always Enabled
Necessary cookies are absolutely essential for the website to function properly. This category only includes cookies that ensures basic functionalities and security features of the website. These cookies do not store any personal information.
Non-necessary
Any cookies that may not be particularly necessary for the website to function and is used specifically to collect user personal data via analytics, ads, other embedded contents are termed as non-necessary cookies. It is mandatory to procure user consent prior to running these cookies on your website.
SAVE & ACCEPT
1387 shares