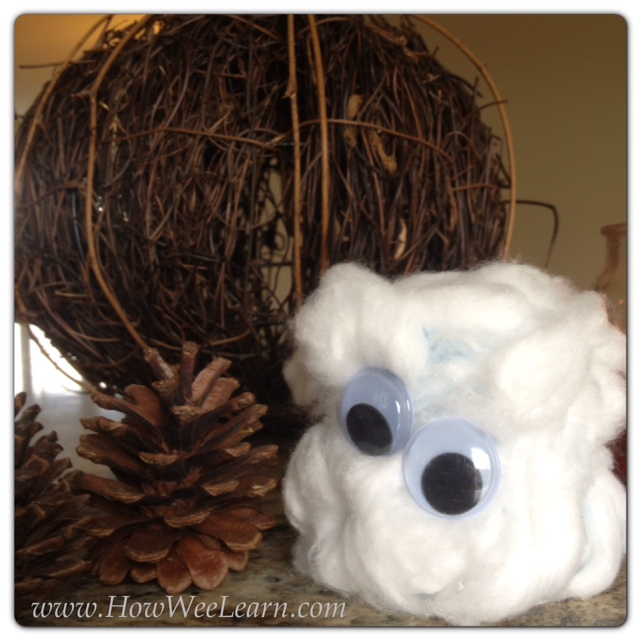 Simple ghost crafts are the name of the game right now.  It all started with these (almost too simple) Facial tissue ghosts.  Sammy and Madeline both became ghost making machines.  As fun as they are, a Mama can only take so many facial tissue ghosts.

So I began thinking of other simple ghost crafts.  We did one in my Kindergarten class using toilet paper rolls and cotton balls that were cute and fun, but I didn’t have very many toilet paper rolls – and I knew my ghost making machines would likely want to make plenty.  Luckily I had just bought Dixie Cups (for another activity) but thought they would work great.  And they did! 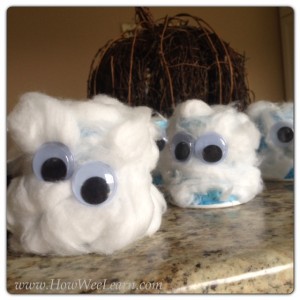 To make these Halloween Ghosts we used

The process is simple, and actually quite relaxing for wee ones – perhaps because of the softness of the cotton balls.  These ghost are really only two steps. 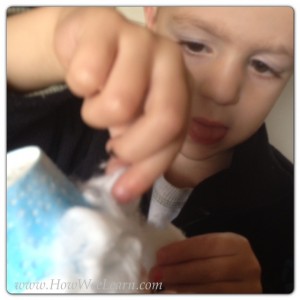 As I predicted, these simple ghost crafts were a big hit – and something Sammy could do all on his own.  Benjamin even got in on the fun!  He was the cotton ball fluffer (with supervision of course).  It took him a little while to warm up to the feeling of the cotton balls, but once he did he took his job very seriously!  The ghost factory workers are expanding … 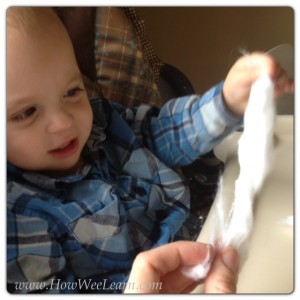 There was a lot of fine motor skills being practiced in this craft, and problem solving skills too.  If there was not enough glue on the cup the cotton didn’t stick too well, and adding more glue was very tricky (as the cotton would get all stuck).  After some thought and talking we decided it would be easier if Sammy could see the glue better, so we added a dot of green paint.  Then Sammy could clearly see where he had already put glue, and where more was needed, before sticking the cotton.

I think I will stick to some simple crafts and learning activities.  Sammy loves being able to do things completely independently right now.  When Madeline gets home from school he loves showing her his projects and announcing that he did it “all by mine’s self”.  AND I drank a coffee “all by mine’s self” too!

If you enjoyed this activity, please consider Liking us on Facebook, or Following on Pinterest so I can share more creative learning ideas with you!  Thank you!

« Simple Halloween Crafts for Kids: Facial Tissue Ghosts
5 Things we MUST do Before it SNOWS! »

This website uses cookies to improve your experience while you navigate through the website. Out of these, the cookies that are categorized as necessary are stored on your browser as they are essential for the working of basic functionalities of the website. We also use third-party cookies that help us analyze and understand how you use this website. These cookies will be stored in your browser only with your consent. You also have the option to opt-out of these cookies. But opting out of some of these cookies may affect your browsing experience.
Necessary Always Enabled
Necessary cookies are absolutely essential for the website to function properly. This category only includes cookies that ensures basic functionalities and security features of the website. These cookies do not store any personal information.
Non-necessary
Any cookies that may not be particularly necessary for the website to function and is used specifically to collect user personal data via analytics, ads, other embedded contents are termed as non-necessary cookies. It is mandatory to procure user consent prior to running these cookies on your website.
SAVE & ACCEPT
71 shares