Of all the things I thought I may write to you about tonight, from the oodles and oodles of pictures I have on my camera just waiting to come to life for you, I chose this simple, simple idea.  Simple is often best after all – right?  At least in our house.

Sam has been doing some sewing lately.  Nothing too crazy – a leaf crown here, and a secret pocket (which is still a story on my camera waiting to be told).  While I was using some burlap for a different Fall project, I realized it would be rather ideal for Sam to sew with.

The big holes, and loose weave, it was actually very ideal.  But what … what oh what could we make with Burlap …

Benjamin just celebrated his second birthday, and as a present received some lovely play food.  The boys have been busy cooking up a storm – both in their kitchen, and with Mama in hers.  Something about that chilly weather that makes me need to turn on the oven.

When we were baking some ‘healthy’ chocolate chip muffins (because I was having a smidgen of Mama guilt for ALL the baking that has been going into those little tummies) I realized that the boys don’t have many actual baking staples in their play food.  They have eggs and milk, but no flour or sugar …  if only we had something we could sew them with … perhaps …

Are you following this drawn out story? 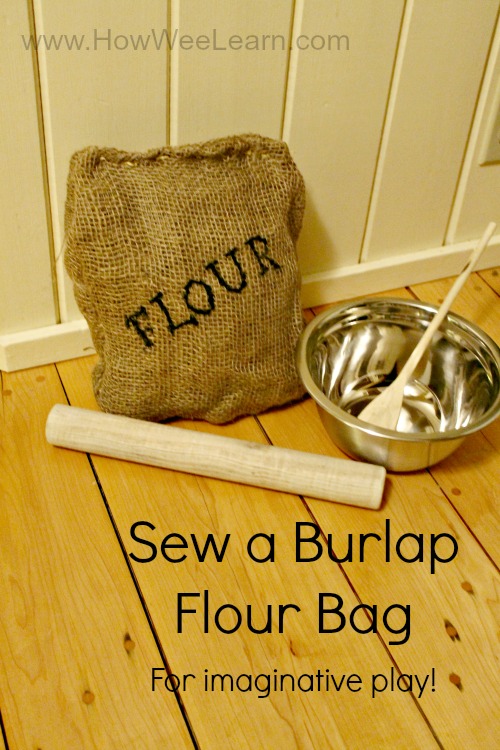 And so it came to be the other day that Sam and I sat down right in the middle of the kitchen floor and sewed a burlap flour bag.  It was just as simple as I had hoped it would be too.

I cut out a big rectangle of burlap.  The burlap was from when we bought some apple trees (when we bought them we were asked if we would like them wrapped in burlap. John at first said no need, but must have heard my sigh as he turned to me with that “do-you-want-it-for-a-craft” look, to which I responded with a “do-you-even-need-to-ask” look),  it wasn’t the best quality, but served this sewing project purpose very well.

I folded the big rectangle in half so it was doubled up.  Then I folded it once more to create the bag shape and had Sam sew 3 sides.  No need to be overly accurate. 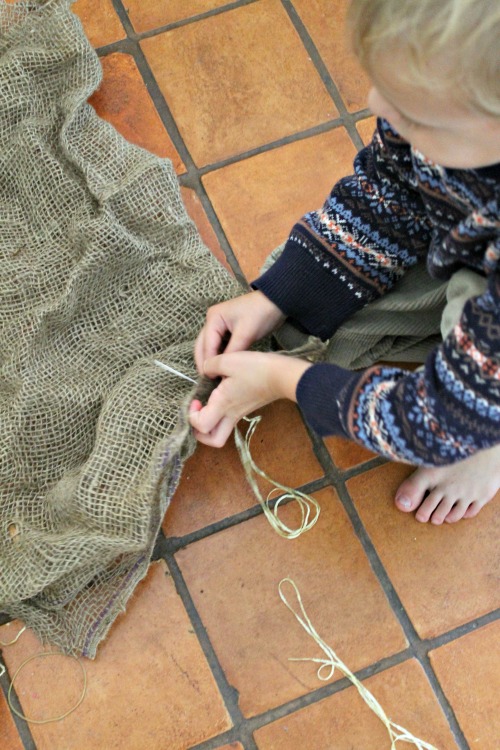 Once all 3 sides were sewn, I showed him the magic that happens when you turn the bag inside out.  He was very impressed. 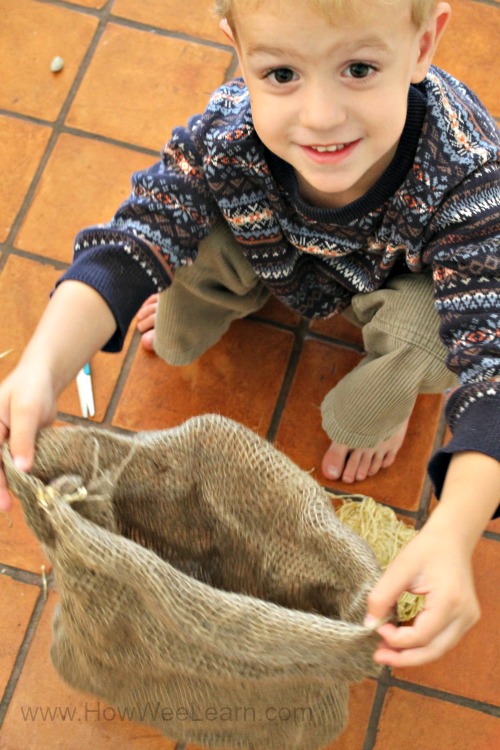 We then stuffed the bag with some more burlap, but anything at all would work, and carefully stitched the top.

I then added the word FLOUR in black paint, so no one would mistake it for just a big bag of burlap … or sugar.  Sugar will be our next project.  Lots of burlap left! 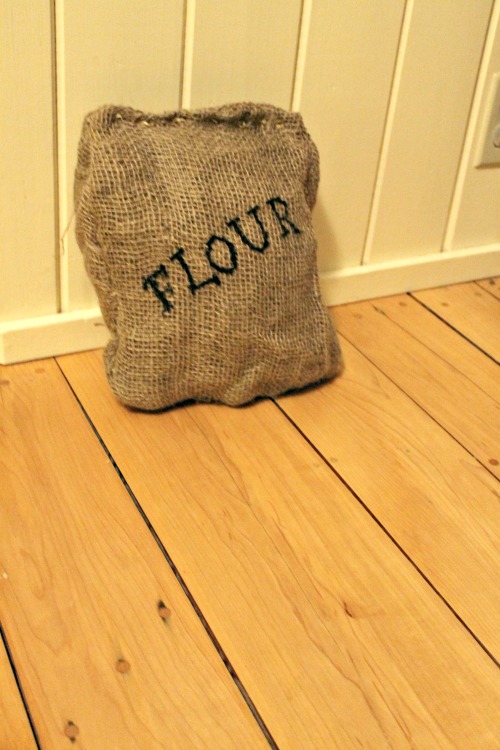 I like adding new toys and playful ideas to my little ones play.  Since we have been baking so much at home, I wanted them to have a chance to process that baking, and really have an opportunity to act it all out themselves.  This is such a great prop for that purpose.

And it was a great chance for Sam to get in some more sewing.  Not to mention a chance for me to use up one of those “things” I have accumulated for an activity with such grand intentions.

Our Burlap Bag of Flour.  Simple, but pretty darn great, don’t you think?

Please consider liking us on Facebook so we can share more creative learning activities with you and your little ones!  Thank you.

Thank you so much for joining me in this space – I am thrilled to be able to share some ideas, thoughts, and time with you!

« Preserving Leaves with the Little Ones
Classic Rhythmic Shaker – with a TWIST! »

This website uses cookies to improve your experience while you navigate through the website. Out of these, the cookies that are categorized as necessary are stored on your browser as they are essential for the working of basic functionalities of the website. We also use third-party cookies that help us analyze and understand how you use this website. These cookies will be stored in your browser only with your consent. You also have the option to opt-out of these cookies. But opting out of some of these cookies may affect your browsing experience.
Necessary Always Enabled
Necessary cookies are absolutely essential for the website to function properly. This category only includes cookies that ensures basic functionalities and security features of the website. These cookies do not store any personal information.
Non-necessary
Any cookies that may not be particularly necessary for the website to function and is used specifically to collect user personal data via analytics, ads, other embedded contents are termed as non-necessary cookies. It is mandatory to procure user consent prior to running these cookies on your website.
SAVE & ACCEPT
11 shares