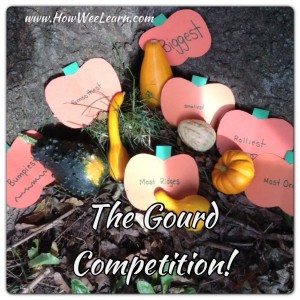 Math sorting games with a fall twist – that is just what we needed!  We went on a trip to our local apple orchard and pumpkin patch yesterday.  We found some great gourds of all different shapes and sizes.  Simply perfect for Fall math sorting, comparing, and contrasting!

After some initial playing and inspecting the gourds, 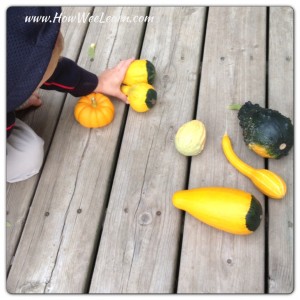 we decided on 7 categories for our competition:

Bumpiest: For this math sorting game we used our sense of sight and touch.  There were three rather bumpy gourds, but upon careful inspection we had a clear winner.

Smoothest: Many of our gourds were quite smooth.  We used careful touch and sight to compare all the smooth gourds.  Madeline and Sam came to an agreement that one was a bit smoother then the others.

Rolliest: This math sorting game was likely the funnest – and we played it much more then needed!  We put all the gourds at the top of the slide and rolled them down one at a time.  The gourd which went the farthest was deemed “rolliest”.  Each and every single time the pumpkin shaped gourd (rolled on it’s side) won.  I was surprised!

Biggest: First of all, for this math sorting game, we had to come to a decision about what we were measuring for the biggest.  Weight, Height, Overall Size?  My wee ones decided it would be measured with a string, all the way around the gourd.  They then compared the lengths of string. 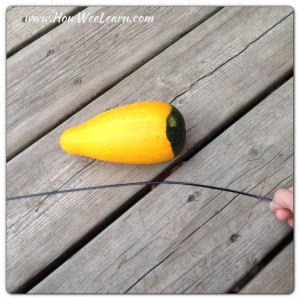 Smallest: This category was easily awarded based on sight.

Most Ridges: might as well throw in some counting to these math sorting games!  We felt all of the gourds to determine which ones we thought might be the ridgy-est.  Then, Madeline (and helper Sam) counted the ridges.

Most Orange: This was a category Sam chose.  Using his sight he determined which gourd was the most orange.  He had to use his best judgement as many seemed quite orange to me!  But, with Preschooler’s discerning eye he made his decision quite easily 🙂

And, in true nature to my Madeline’s thoughtfulness, every gourd won a prize.

This gourd competition was tons of fun and taught us a lot!  Each category was it’s own math sorting game.  My wee ones had to compare, contrast, use their best judgement (2 were quite similar in their … um … orange-ness), and experiment.

I love when nature and the magic of seasons changing play such a big role in my wee ones learning.  I don’t think we have seen the last of these gourds!

Do you have any great gourd activities?

This website uses cookies to improve your experience while you navigate through the website. Out of these, the cookies that are categorized as necessary are stored on your browser as they are essential for the working of basic functionalities of the website. We also use third-party cookies that help us analyze and understand how you use this website. These cookies will be stored in your browser only with your consent. You also have the option to opt-out of these cookies. But opting out of some of these cookies may affect your browsing experience.
Necessary Always Enabled
Necessary cookies are absolutely essential for the website to function properly. This category only includes cookies that ensures basic functionalities and security features of the website. These cookies do not store any personal information.
Non-necessary
Any cookies that may not be particularly necessary for the website to function and is used specifically to collect user personal data via analytics, ads, other embedded contents are termed as non-necessary cookies. It is mandatory to procure user consent prior to running these cookies on your website.
SAVE & ACCEPT
24 shares