My oldest is very artistic. My middle child loves being outside and in nature (and wild). And as it turns out, this baby of mine loves sports.

I have to be honest, I really didn’t see that last little curve ball. I would say we are a crafty family, sure. An outdoorsy family, most definitely. But a sporty family? Well …

I suppose we are about to become one though. Ben is just barely 3 and already has the meanest slap shot I have ever been witnessed to while playing goalie in the basement. A role I play quite often. Hockey is certainly his favourite sport right now, but he also loves golf, volleyball, basketball, and pretty much any other sport he has ever seen for even a split second.

Since playing hockey is what Ben chooses to do almost 90% of his time, I thought I might be able to sneak in a little name practice too. 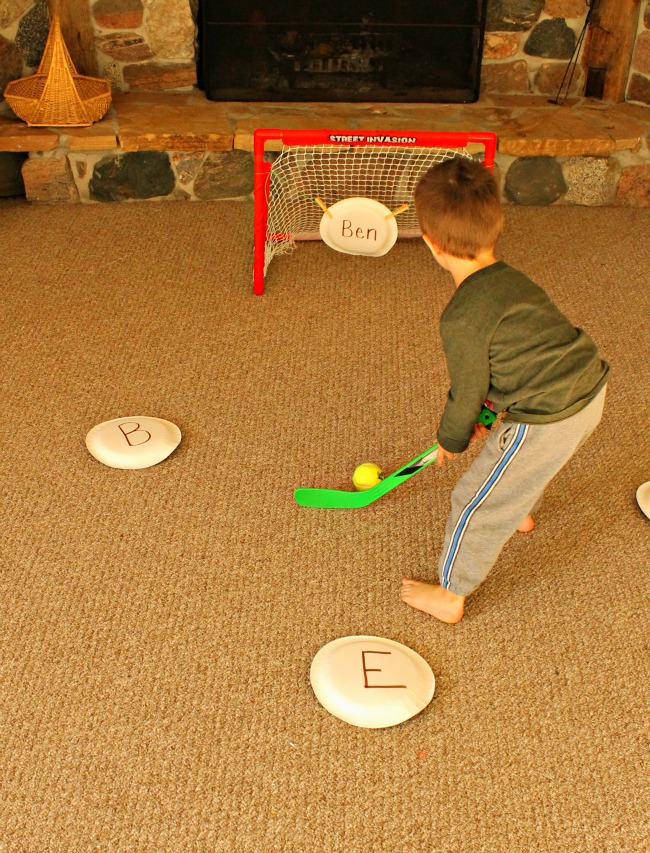 And so I bring you – name hockey.

I simply popped up a paper plate labelled “Ben” in the hockey net. I added two small pieces of yarn and tied two clothespins to the end so the paper plate could easily be clipped on and off.

Then I labelled three other paper plates with his name letters: ‘B’, ‘E’, and ‘N’. 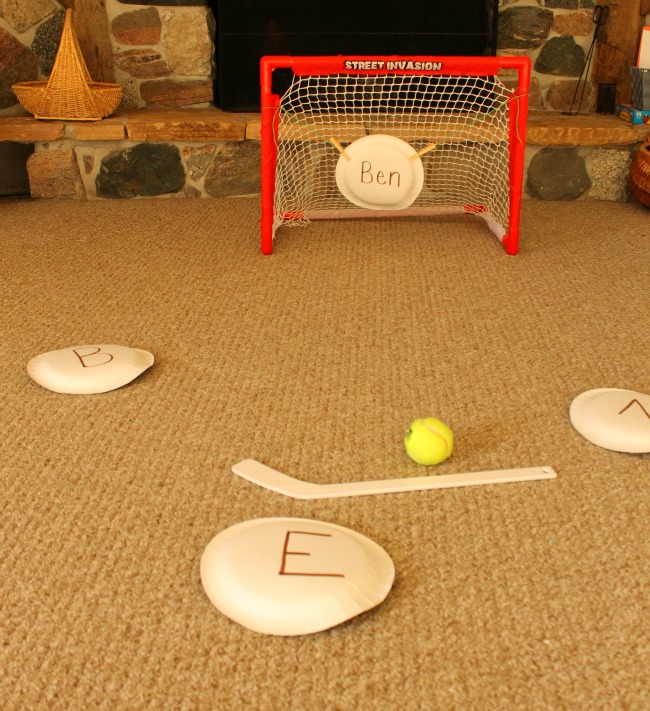 When I teach little ones their names I write it in proper form ‘Ben’, but when I am introducing the letters separate I use capitals. This is also a great chance for little ones to practice matching their upper and lower case letters.

I didn’t really have too much of a plan as we got started, I just wanted Ben to have a chance to play with and see his name letters.

He started by simply shooting the ball at the paper plate goalie named Ben. 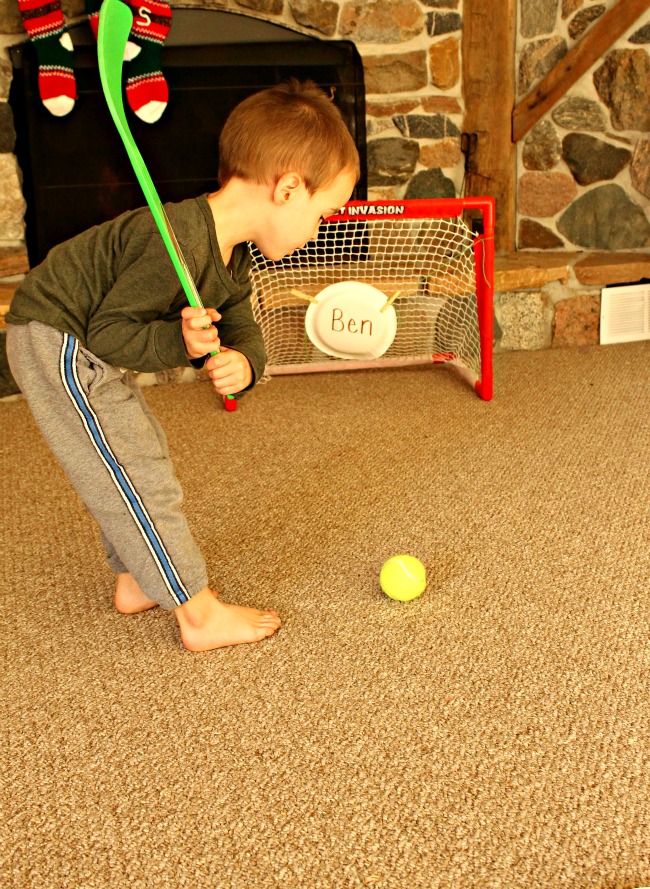 Then he practiced some stick handling around the loose paper plates before taking a shot on the net. This was a great chance for me to be the announcer, introducing Ben to these letters. 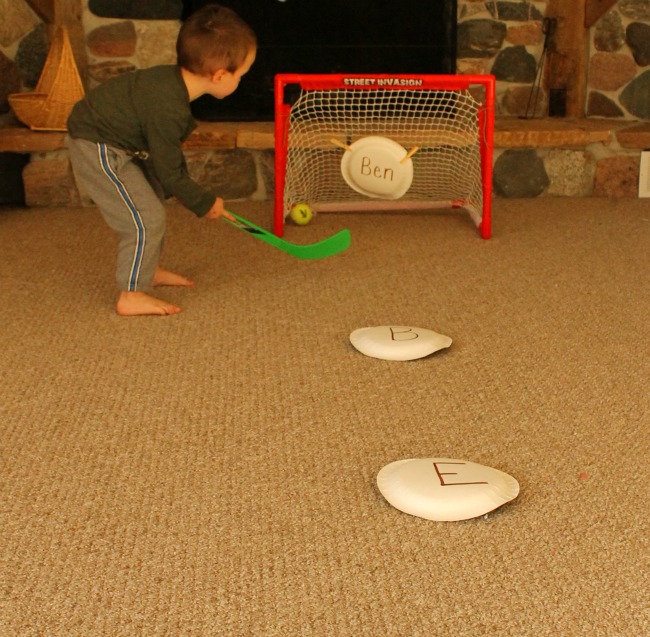 “Look at that folks, Ben has made a sharp turn around the capital letter B, he is rounding the capital letter E, and he is making a full move towards the letter N. He has done it! And he is off to the net. Can real Ben score on paper plate Ben? WILL HE DO IT?! SCORE!!!”

The best part is that Ben doesn’t even blink when I play the enthusiastic announcer. Just a normal morning at home with Mom.

After awhile Ben started shooting the paper plate capital letters into the net as well. Turns out paper plates slide pretty well, even on carpet. 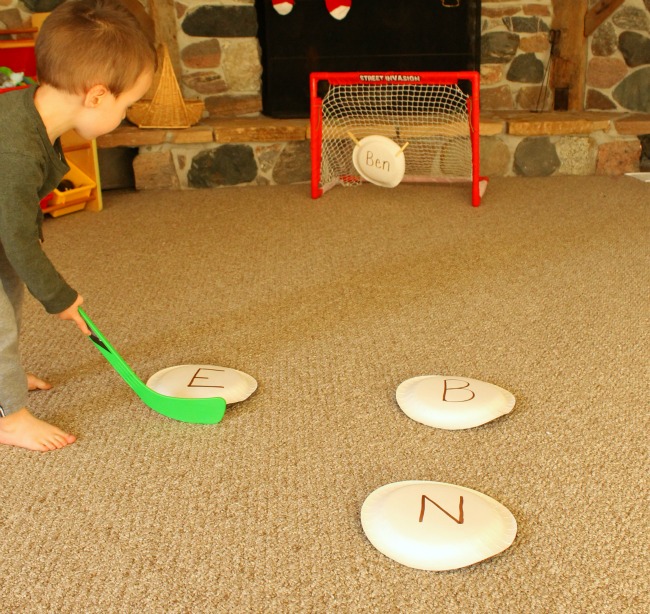 There is no right or wrong way to play of course. This activity can be easily adapted to meet any little ones current skill level. Maybe your little one is working on numbers, or sight words? Those would be great with this activity too.

I love finding ways to make introducing the alphabet letters fun. Since Ben is so young we are still really focusing on all of that great oral language development. Giving him a super strong foundation for literacy. We do a lot of rhyming, singing, reading, and story telling.

Over the next year or so we will be adding in more and more letter play. But as I always say (in my own head every day too …) there is no rush.

Hope you are having a lovely day friends!

Thank you for reading.

« Homemade Gifts for Teachers
The Best Casseroles to Gift a Friend »

This website uses cookies to improve your experience while you navigate through the website. Out of these, the cookies that are categorized as necessary are stored on your browser as they are essential for the working of basic functionalities of the website. We also use third-party cookies that help us analyze and understand how you use this website. These cookies will be stored in your browser only with your consent. You also have the option to opt-out of these cookies. But opting out of some of these cookies may affect your browsing experience.
Necessary Always Enabled
Necessary cookies are absolutely essential for the website to function properly. This category only includes cookies that ensures basic functionalities and security features of the website. These cookies do not store any personal information.
Non-necessary
Any cookies that may not be particularly necessary for the website to function and is used specifically to collect user personal data via analytics, ads, other embedded contents are termed as non-necessary cookies. It is mandatory to procure user consent prior to running these cookies on your website.
SAVE & ACCEPT
508 shares