I just love teaching kids to rhyme. I have the BEST rhyming words game for preschoolers! Not to toot my own horn or anything, but 3 year olds just adore this fun and easy activity. 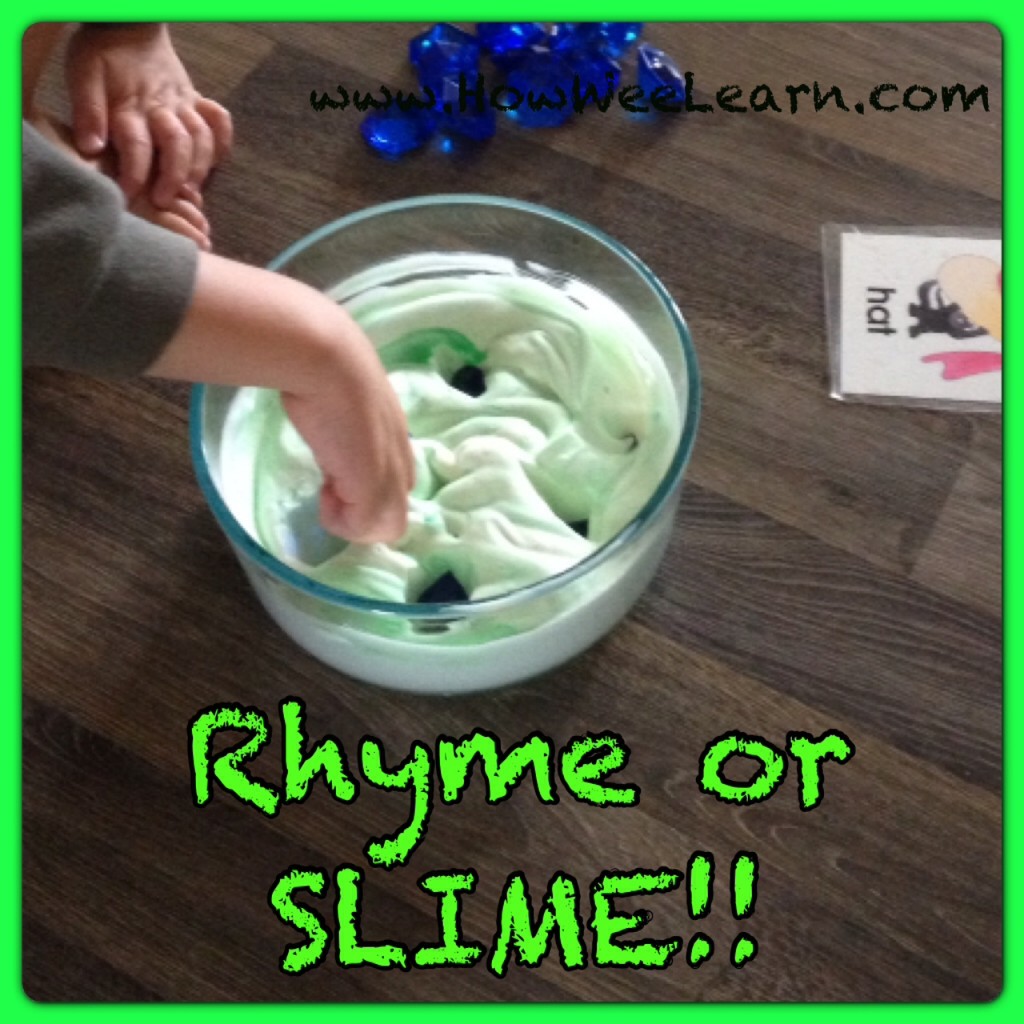 Rhyming is likely not brand new to your preschooler. I bet you naturally do it every day – perhaps without even realizing it.  Tons of songs, poems, and books rhyme.  As I was playing with my Sam yesterday – I realized we could use a bit of practise in this area.  Sometimes we need that direct teaching to really grasp something.

I tried to sing some silly songs, and make up some (what I thought to be) hilarious poems – but they were not winning him over.  And since preschoolers need to be engaged to learn, I thought up this super fun (and kinda gross) rhyming game.

We call our rhyming words game “Rhyme or Slime”

This rhyming game is great, messy, engaging, and oh so simple.

The concept is easy: If 2 pictures rhyme – great!  But  if 2 pictures do not rhyme – throw a stone into the slime.

First we whipped up a batch of slime.  This is just what we call slime – I love it because it is not nearly as goopy or messy as ‘real’ slime.

Mix together.  We added green food colouring to make it extra slime like.

We started off nice and simple:

Out loud I said: Cat and Bat – I asked, “Do they sound the same?  Do they end with the same sound?” Sammy decided yes they did, and disappointingly put the word ‘Bat” in the rhyme pile.  I followed up by saying, “Good for you – they both end with the sound ‘at’!”

Next, we did Cat and Frog – Sammy smiled broadly and announced Frog would go in the slime.  Excellent – clearly I had his attention! 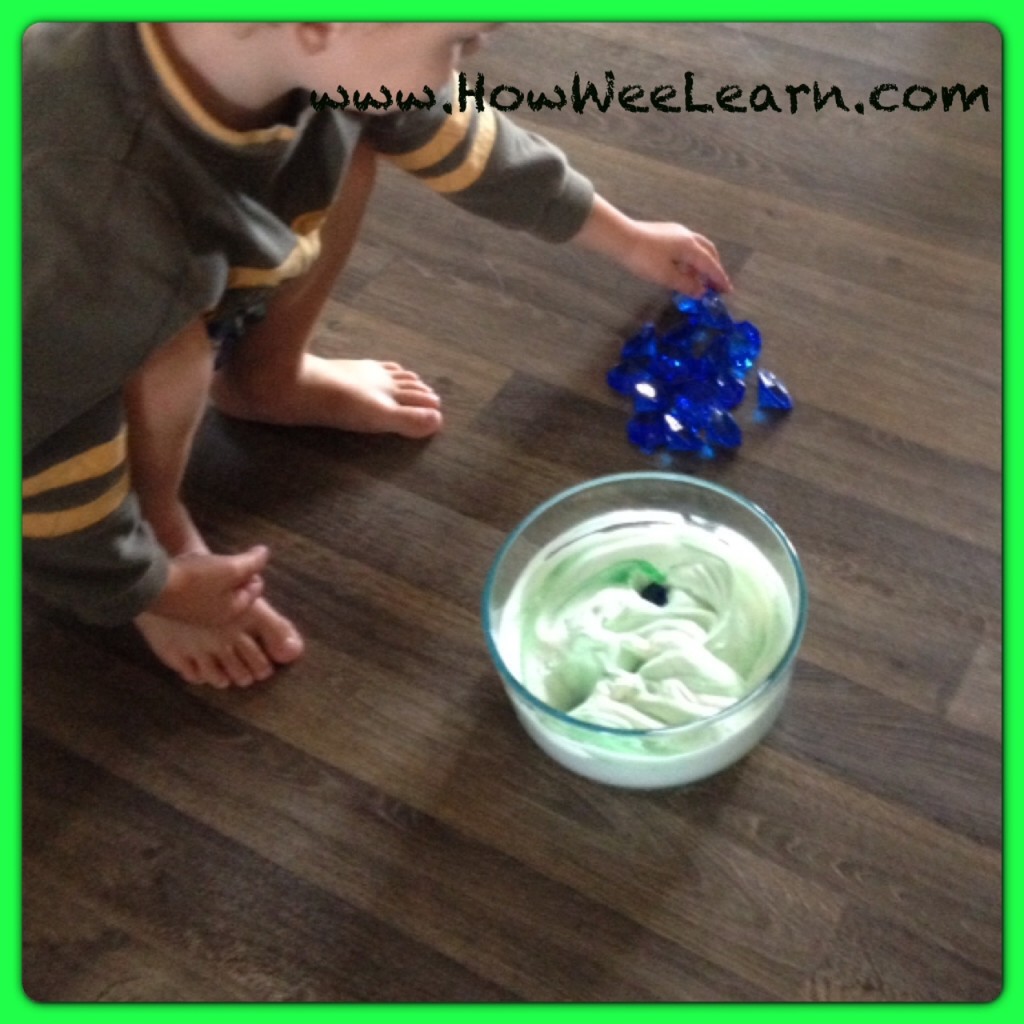 Once he got the hang of this, I brought out some word cards.  I gave him a word, and when he came up with a rhyme he took one stone out of the slime.  This was a great way to keep this activity rolling.

I would rhyme and when the words DID indeed rhyme a stone would get thrown in the slime. Then Sam would need to come up with a rhyme to either a word I said or a picture card to dig OUT a stone.

I wasn’t worried about them being real words at this point – dog rhyming with mog was great. 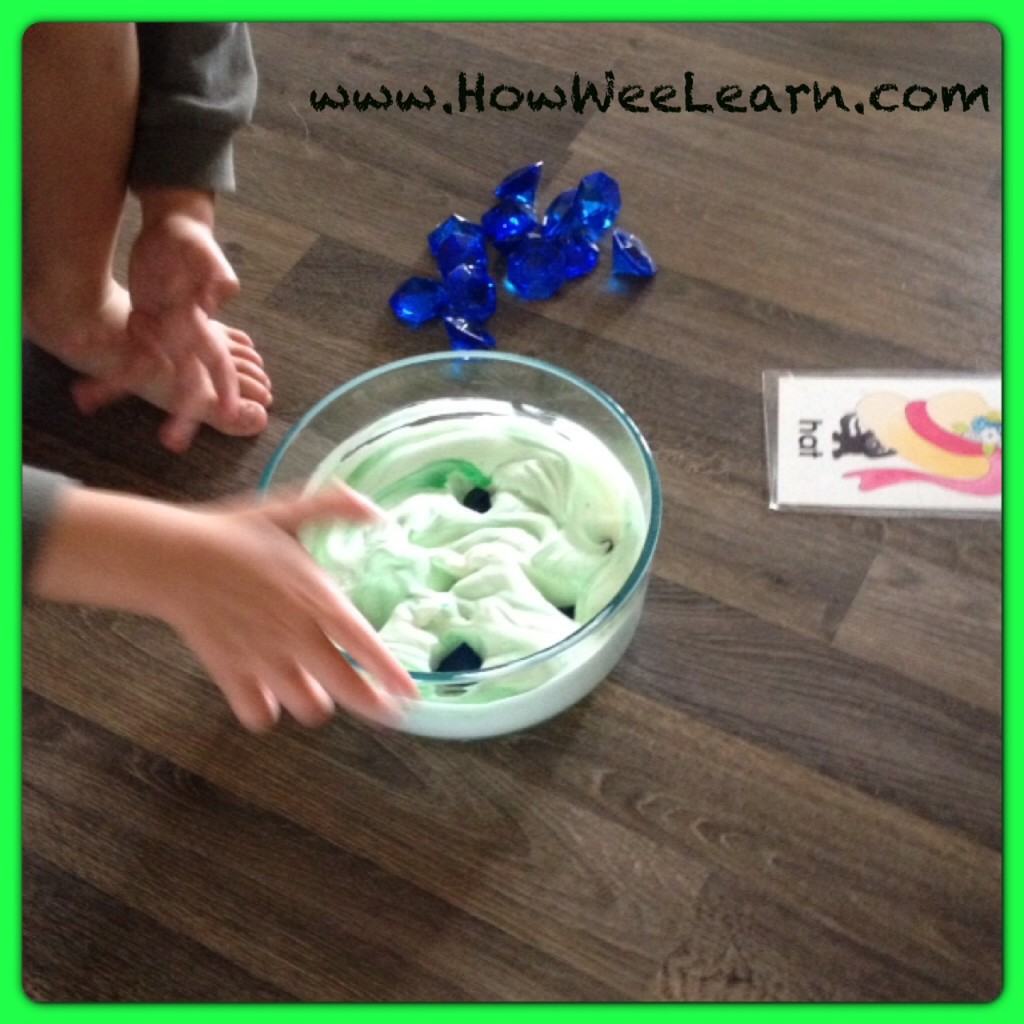 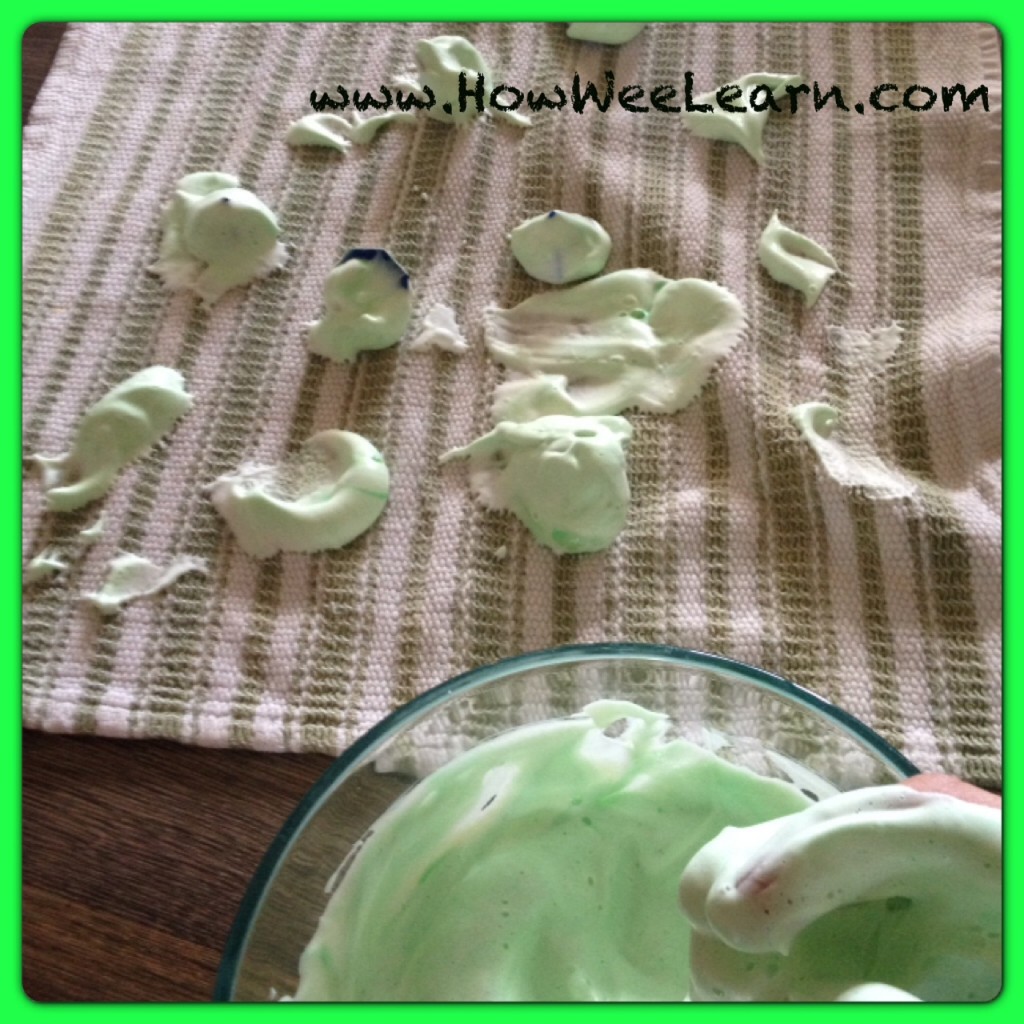 We played this for a nice long time – longer then I anticipated.

This turned out to be an excellent and engaging rhyming game for my wee one.  He loved playing with the slime – and eagerly rhymed hoping to find some new words to add to his slime.

When we finished – Sam announced, “Mama, ‘rhyme’ and ‘slime’  – those rhyme!”  I congratulated him telling him he was so smart.  He said, “that rhymes too!” …. What rhymes hunny?  “Sam and Smart!” Hmmm … clearly we will be playing a few more games to really cement that learning!!  My sweet little guy – so much to learn when you’re 3!

I hope this rhyming words game is as big of a hit with your preschoolers as it was with mine! 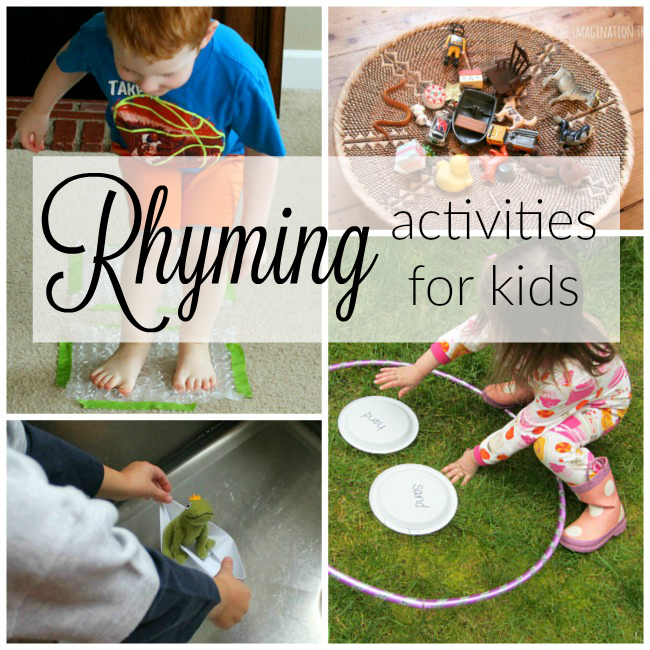 The Best Rhyming Activities for Kids 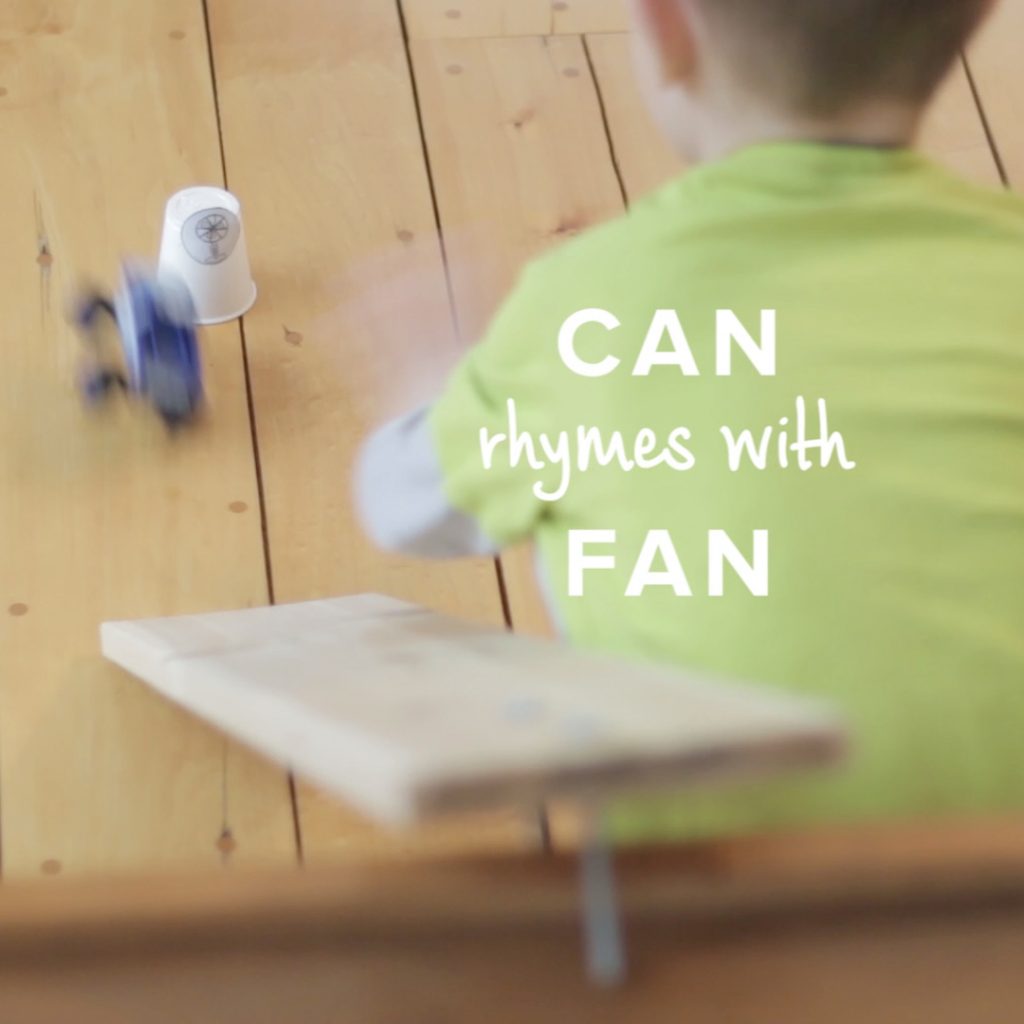 Rhyming is Fun and Easy, except when it’s not … 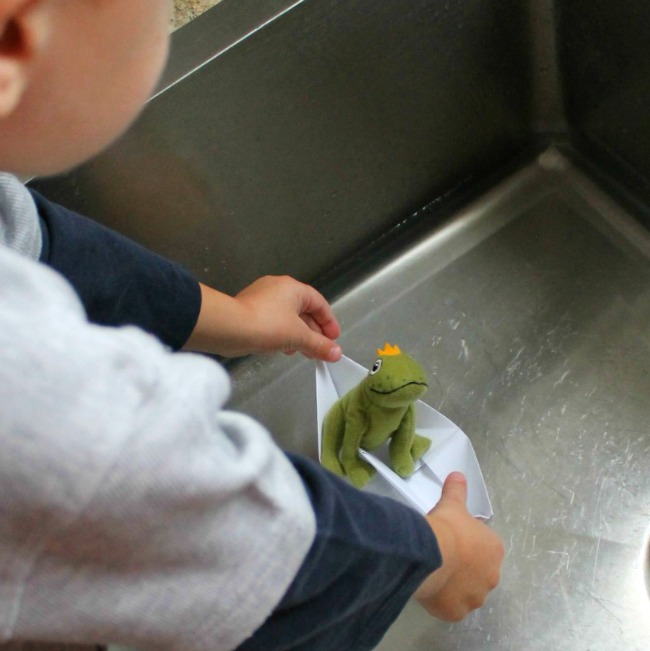 This website uses cookies to improve your experience while you navigate through the website. Out of these, the cookies that are categorized as necessary are stored on your browser as they are essential for the working of basic functionalities of the website. We also use third-party cookies that help us analyze and understand how you use this website. These cookies will be stored in your browser only with your consent. You also have the option to opt-out of these cookies. But opting out of some of these cookies may affect your browsing experience.
Necessary Always Enabled
Necessary cookies are absolutely essential for the website to function properly. This category only includes cookies that ensures basic functionalities and security features of the website. These cookies do not store any personal information.
Non-necessary
Any cookies that may not be particularly necessary for the website to function and is used specifically to collect user personal data via analytics, ads, other embedded contents are termed as non-necessary cookies. It is mandatory to procure user consent prior to running these cookies on your website.
SAVE & ACCEPT
1026 shares