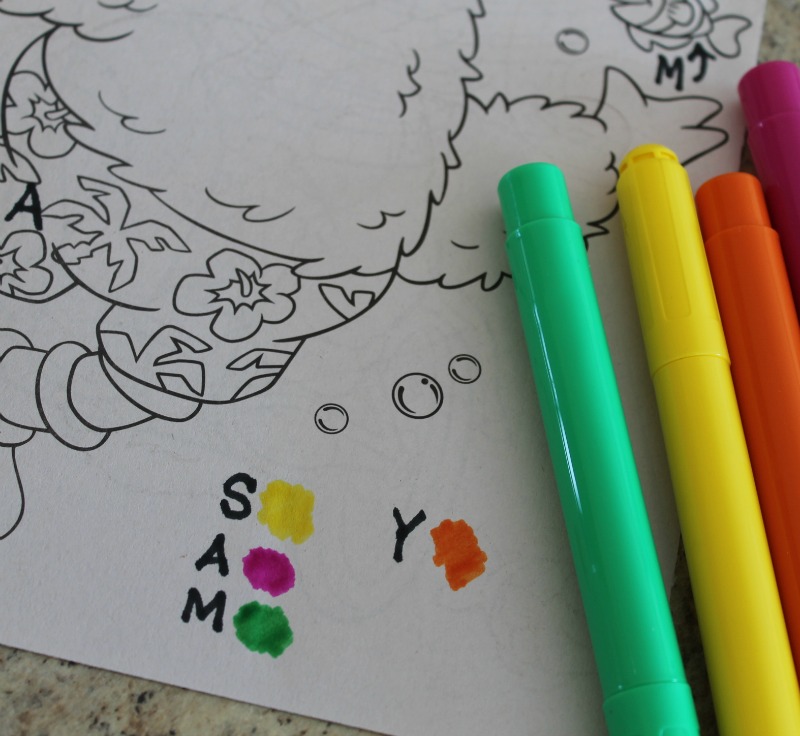 This activity was super easy and set up in seconds.  It is very much like a simplified version of colour by number – except it uses letters.  And it is one of those great activities that can be used for any child at any stage of recognizing letters.  For this activity we used Sam’s name letters, but we have used this activity since teaching letter recognition for most of the alphabet.

We are still on upper case letters, but as long as Sammy’s interest in the alphabet continues we will be starting lower case letters soon.  I love letting Sam explore and learn through play, and truthfully I had not intended on doing much alphabet recognition while Sam was 3.  But I am a believer in following a child’s lead and interests!  And right now he is very eager to learn his ABCs.

Teaching letter recognition through this activity is so simple:

First I chose some letters and wrote them on the colouring page (S was on Big Bird, A was on his shorts, M was a fish, etc.)

Then I gave each letter a colour by writing the letters again at the bottom of the page and drawing with a marker beside them (S was yellow, etc). 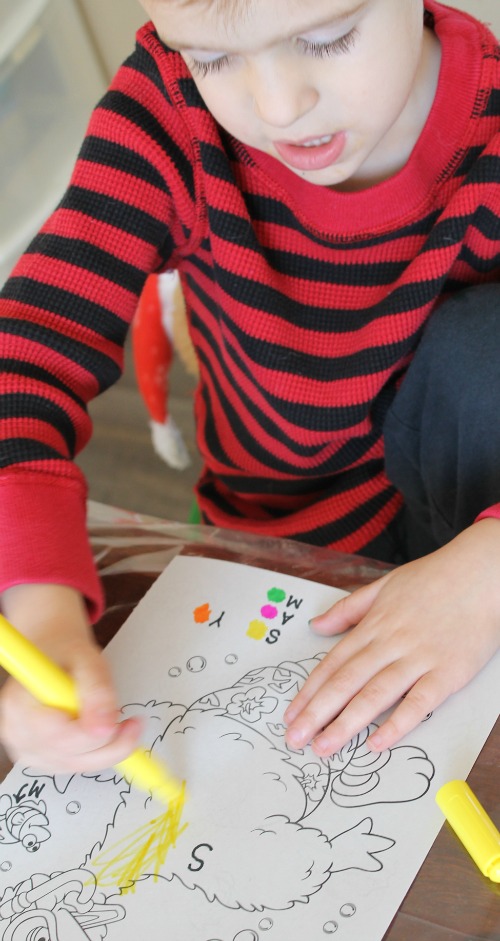 And then Sam was able to start his letter recognition and colouring!  He really enjoyed this activity and even created more colouring pages with letters on his own.  He would ask me to write some letters on his page, and then assign each letter a colour on his own.

I love being able to add something simply to an activity to make it something entirely new.

The colouring books will be fun to use on our travels, and when my kids grow tired of them, we can add in some letter recognition teaching to change it up!

This website uses cookies to improve your experience while you navigate through the website. Out of these, the cookies that are categorized as necessary are stored on your browser as they are essential for the working of basic functionalities of the website. We also use third-party cookies that help us analyze and understand how you use this website. These cookies will be stored in your browser only with your consent. You also have the option to opt-out of these cookies. But opting out of some of these cookies may affect your browsing experience.
Necessary Always Enabled
Necessary cookies are absolutely essential for the website to function properly. This category only includes cookies that ensures basic functionalities and security features of the website. These cookies do not store any personal information.
Non-necessary
Any cookies that may not be particularly necessary for the website to function and is used specifically to collect user personal data via analytics, ads, other embedded contents are termed as non-necessary cookies. It is mandatory to procure user consent prior to running these cookies on your website.
SAVE & ACCEPT
67 shares