What a weekend! It was full to the brim, and full of snow too. So much so, in fact, that we wound up without internet for quite some time. Given that our phone, television, and pretty much any other electronic entertainment we have runs off internet it was kind of like Little House on the Prairie over here.

It was actually very nice, though my teenager would not agree.

And except when I realized I needed to write report cards.

But all in all, it was a nice change – the first snowstorm of the season big enough to knock us out. My calm demeanor with these storms fade as the season progresses. March storms will likely not be much like Little House on the Prairie at all.

Today, however, we are back in business. I have had this neat activity to share with you since before the storm, so I thought I would take this chance to finally share it with you.

Awhile ago (well, years ago actually) I shared this fun way to introduce mapping skills to kids. It is a great hands on way to introduce the concept of how a map works, and is very effective since it puts little ones inside the map.

Last week, a lovely reader commented on that post telling me how she turned it into a scavenger hunt with her daughter. Brilliant!

And so today I bring you her lovely idea, as it played out with my busy boys. 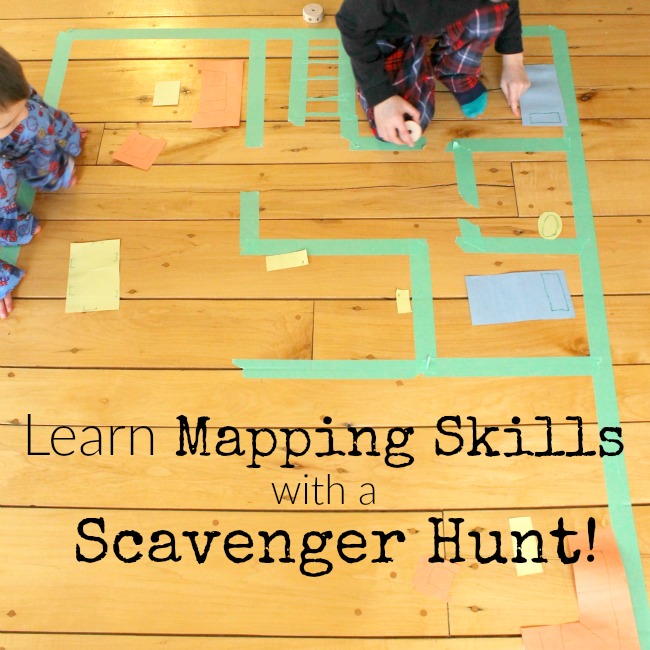 We began by putting painters tape down on the floor and making a very simple blueprint of our main floor.

I added in construction paper beds, couches, chairs, and so on to help my little guys make sense of what rooms were which. 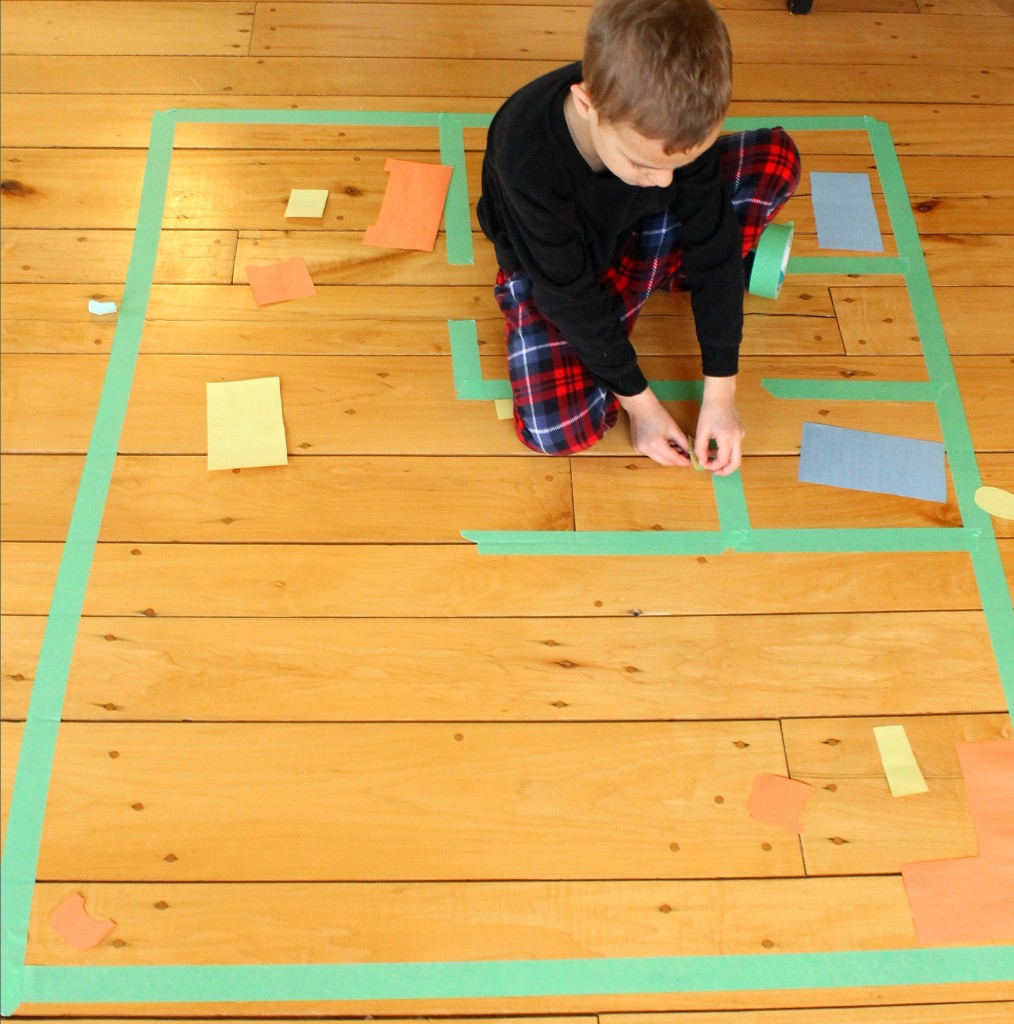 Then we played some simple games to get the boys orientated. I would say something like, ‘stand in the kitchen’ and they would need to find the kitchen on the map and stand in it.

Finally we were ready for the scavenger hunt. The boys each grabbed a stuffy – of course they chose identical stuffies. I decided to hide two stuffies because, well most simply, I have two young kids. Anything else would result in arguing, grabbing, or other undesirable shenanigans.

I then hid the stuffies somewhere on the main floor as the boys covered their eyes. Once they were hidden, I put two little markers onto the map showing where they were. We used little wooden blocks, but anything could work.

So when I hid a stuffy under the couch, I put the marker on the couch in the living room of the map.

Nice and simple and boy was it a hit!

After awhile they took turns hiding the stuffies for me to find. And Madeline. And Daddy too.

They were definitely into this one.

This was a great chance for my little ones to practice visual spatial skills, mapping skills, and body awareness too. Lots of great learning and oodles of fun.

I hope you are having a lovely week friends and staying warm – thank you for reading!

This website uses cookies to improve your experience while you navigate through the website. Out of these, the cookies that are categorized as necessary are stored on your browser as they are essential for the working of basic functionalities of the website. We also use third-party cookies that help us analyze and understand how you use this website. These cookies will be stored in your browser only with your consent. You also have the option to opt-out of these cookies. But opting out of some of these cookies may affect your browsing experience.
Necessary Always Enabled
Necessary cookies are absolutely essential for the website to function properly. This category only includes cookies that ensures basic functionalities and security features of the website. These cookies do not store any personal information.
Non-necessary
Any cookies that may not be particularly necessary for the website to function and is used specifically to collect user personal data via analytics, ads, other embedded contents are termed as non-necessary cookies. It is mandatory to procure user consent prior to running these cookies on your website.
SAVE & ACCEPT
286 shares