Do you know what I love? Questions from Mamas. ESPECIALLY when I have the answers! While there are oodles and oodles of parenting questions I could not even take a stab at, those related to learning — and specifically  alphabet learning? I’ve got your back.

How do you introduce letters?  Capitals? Lower case? What order? When do you introduce sounds?  Since the alphabet is such a major learning piece for little ones, I thought I would write to you today all things Alphabet Learning.

(Please be warned, the teacher voice is coming out) 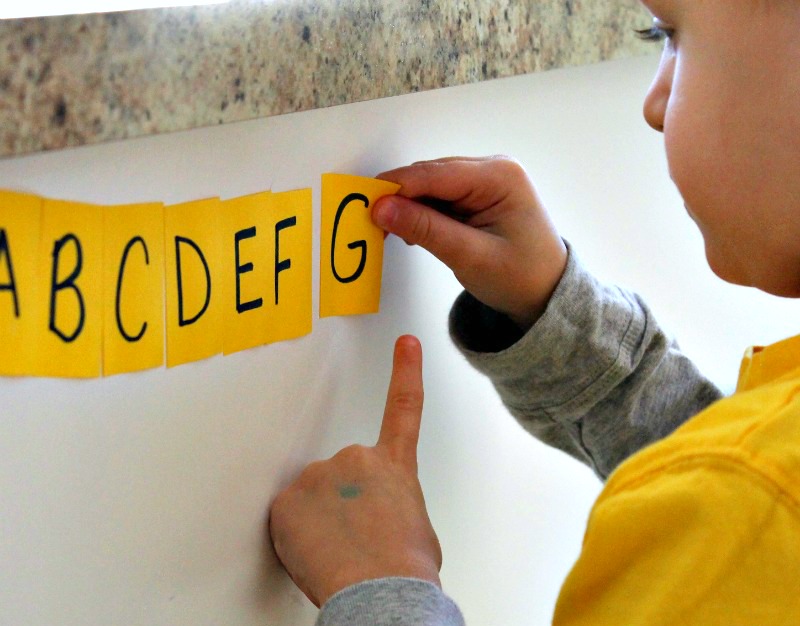 Since this is SUCH an important topic, and as it turns out I have a lot to say on the topic, I have written an entire eBook dedicated to teaching children to read. This book takes you from the very beginning of learning letters, all the way through to actually reading.

Step by step and oh so playful. It is a great investment for $8

There are of course many, many theories and philosophies on how to introduce the alphabet to little ones.  This is just one method.

But it is from sound research, and was used with success in my Kindergarten classroom for many years.  It is child led, and meaningful for little ones. Here is an overview of Alphabet Learning:

Alphabet Learning Step 1: Talk and Read (and read and read)

Here is a post on this important topic: 5 Natural language development for preschoolers.

The step after this, which I begin to take as soon as little ones show an interest in print and letters is alphabet recognition.

Alphabet recognition is the ability to recognise letters.  There are many different levels to this step in learning.

At first, I like to introduce little ones to their name letters.  I love name puzzles (such as our recent Valentine name puzzle) to help with this alphabet recognition skill.

Here are some alphabet recognition activities for preschoolers that focus on name letters:

An A-maze-ing way to Learn letters

Sight words on the Pumpkin Patch

Once little ones have a firm understanding of their name letters, I begin to introduce alphabet recognition for the rest of the alphabet.

Alphabet Learning Step 3: All other letters

I do this in two ways:

The first, (and this is a personal choice) is by using this order for introducing the alphabet.  I wrote a post all about The Order for Teaching Letters too. 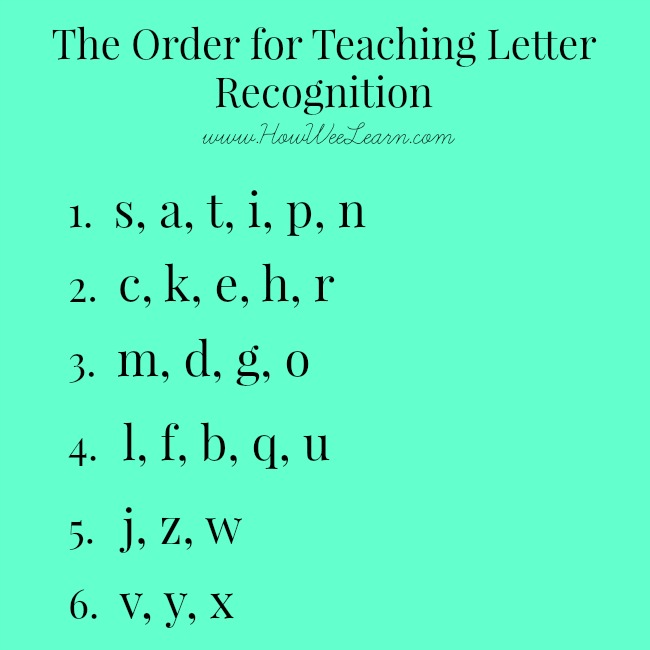 The second way I introduce alphabet recognition for preschoolers, and this one only works well with one or two little ones at a time, is by adding names and sight words, one at a time.  For Sammy, once he knew his name, he started to learn the other names of family members.  We did this through lots of play and games – like this Family post office.  Once he started to recognize these names, we started to work on the alphabet recognition of the letters within each name.  Once Sam had learned his brother and sisters names, Mommy and Daddy, and a few others he was interested in, he had only a few letters remaining. 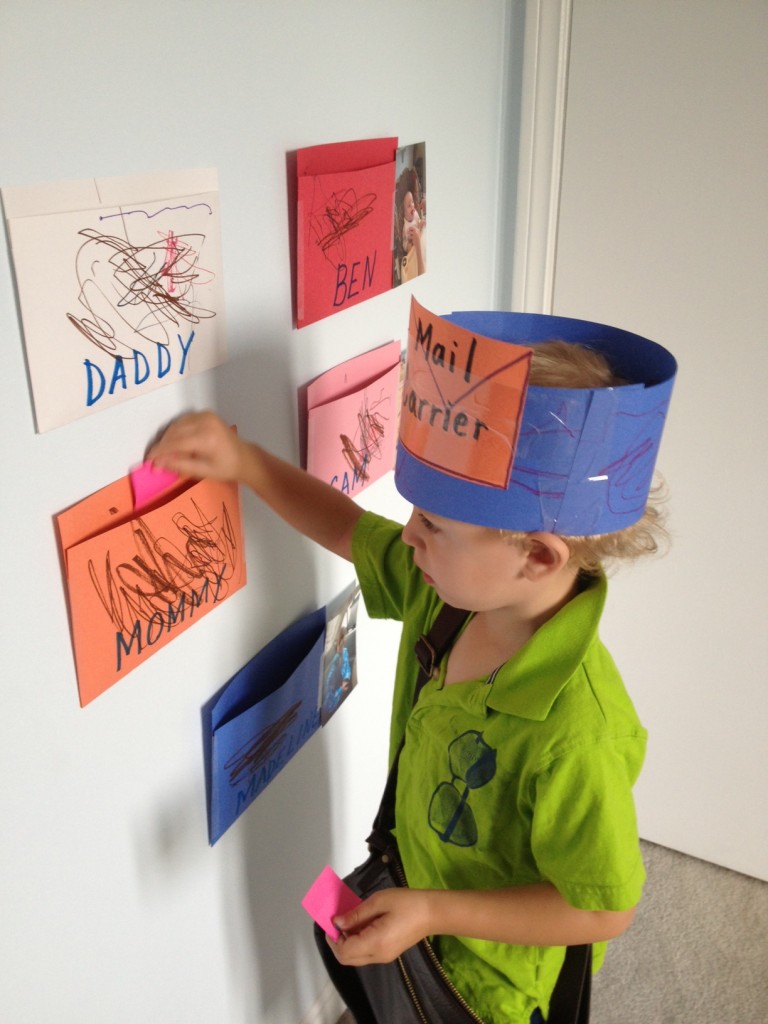 So we did an alphabet recognition scavenger hunt.

This scavenger hunt was super duper easy to set up (just the way learning should be!)  I took sticky notes and wrote the alphabet on them – one letter per sticky note.  I then hid these sticky notes around the family room. 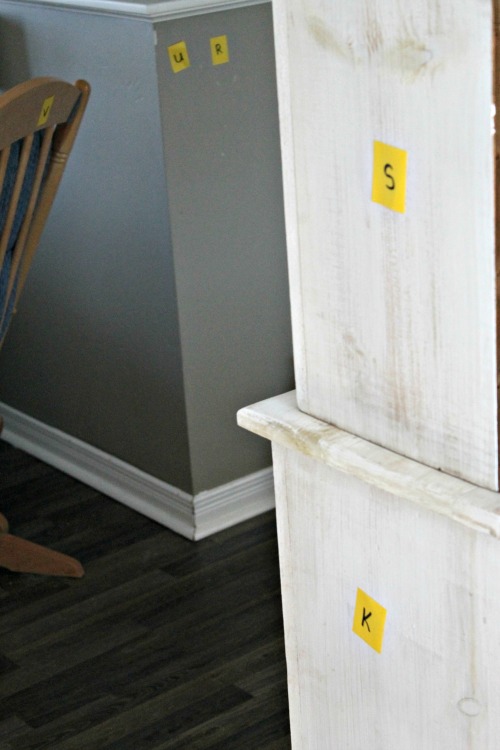 Sammy’s job was to find each letter, in order, and line them on the wall.  He took his job very seriously and was so excited to find each and every letter!

He did get stuck on a couple of letters, so I had him leave a space and continue.  When he was done, there was only 4 letters left.  He gathered them and I asked him, “Which one of those four letters do you think is the ‘G’?”  Since there were only a few letters to select from, he could easily recognise each letter. 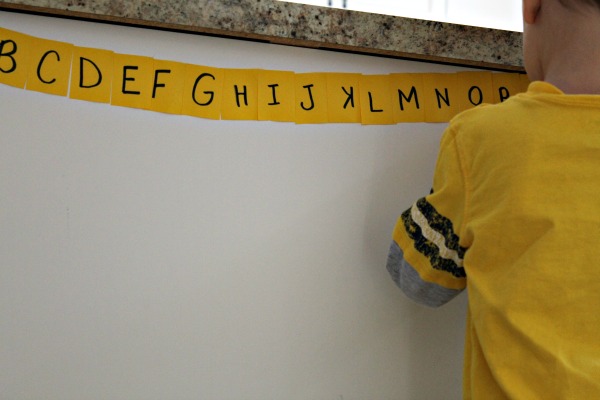 I hope this post on alphabet recognition  for preschoolers was a helpful first step to your little ones alphabet learning.

I am a big believer in play based learning and waiting until children show an interest in print and letters to begin.  If your little one does not yet want to learn letters, consider waiting – according to many researchers and authors, there is absolutely no harm (and actually a lot of benefits) to waiting to introduce alphabet learning in kids.  Until my little ones are ready we read (and read) and talk (and talk).

Thank you so much for reading friends. I hope you are having a lovely start to your week!

This website uses cookies to improve your experience while you navigate through the website. Out of these, the cookies that are categorized as necessary are stored on your browser as they are essential for the working of basic functionalities of the website. We also use third-party cookies that help us analyze and understand how you use this website. These cookies will be stored in your browser only with your consent. You also have the option to opt-out of these cookies. But opting out of some of these cookies may affect your browsing experience.
Necessary Always Enabled
Necessary cookies are absolutely essential for the website to function properly. This category only includes cookies that ensures basic functionalities and security features of the website. These cookies do not store any personal information.
Non-necessary
Any cookies that may not be particularly necessary for the website to function and is used specifically to collect user personal data via analytics, ads, other embedded contents are termed as non-necessary cookies. It is mandatory to procure user consent prior to running these cookies on your website.
SAVE & ACCEPT
2027 shares