This is a sponsored post written by me on behalf of Dare Bear Paws. All opinions are 100% mine.

Do you know one of the things I love most about preschoolers? How much they LOVE learning. Math, letters, science – you name it. These little people are so curious and inquisitive and just can’t wait to learn.

Preschool math games are always a hit around our table. But I found a way to make them EVEN better — by adding cookies! 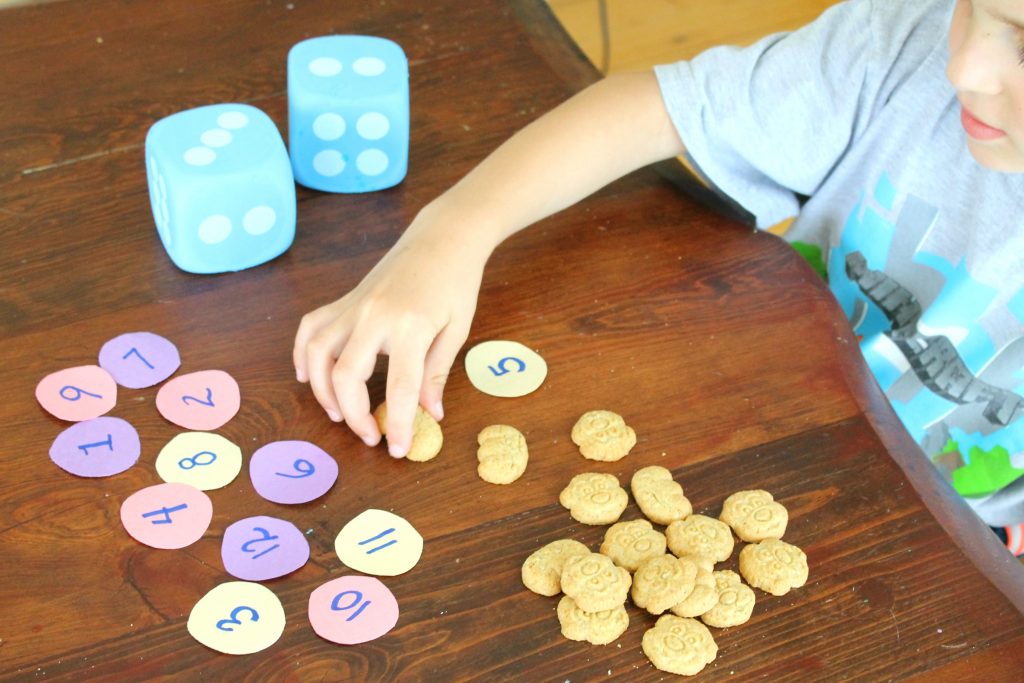 Now I know what you are likely thinking — but… the sugar. And I am right there with you. These busy little boys of mine do not need extra sugar. That’s one of the main reasons we try to make so many of our own things. And when I don’t make it myself, I am the mom in the store squinting at the ingredient list. I have managed to find a few staples that are low in sugar and made with simple ingredients, which has saved me so much time in the kitchen. This past week, I found COOKIES TOO!

These My First Bear Paws Cookies by Dare have only 4 grams of sugar per serving and are made with real ingredients as well. These crunchy little cookies have no artificial sweeteners, colours, or flavours either. I was so excited that I thought we would add these cookies into our math games. The boys were so surprised and so engaged in the activities!

Here are 5 preschool math games I have been playing with my littlest guy this week. 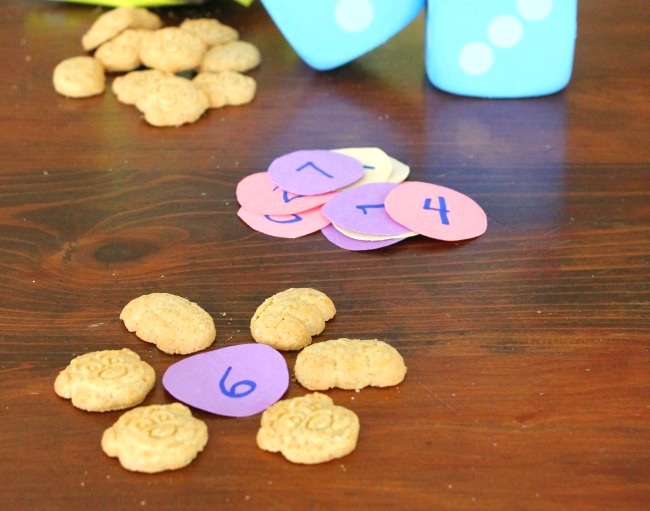 This activity is nice and simple and SO SO full of learning. This is such a great math game if you are just beginning math activities with your little one. Ben rolled the die, recognised the number of dots (or counted if he didn’t recognise), selected the numeral for the middle of the flower, and counted out the right number of cookies to add as petals. Think of all the learning that is going on with this simple activity! And at the end, of course, a sweet treat. 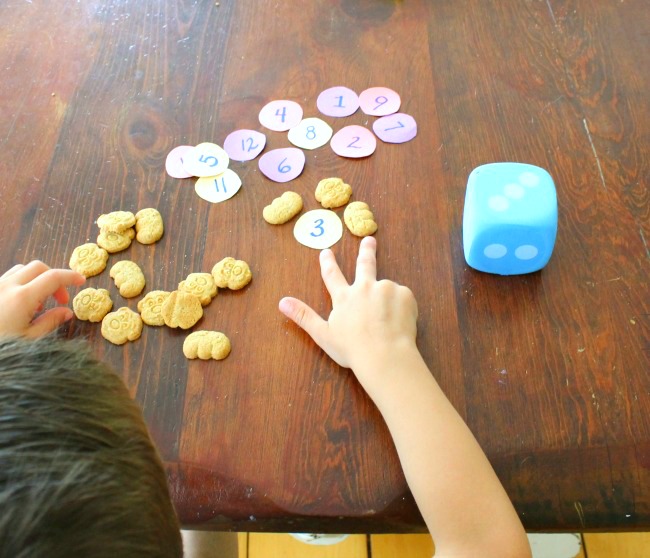 The next activity is the same as the first, but uses two dice. Ben would roll two dice and call out the two numbers. He would then add them together. We are using the strategy of “counting on” to introduce him to adding, so Ben would start with the biggest number (let’s say 5) and count to the additional numbers (let’s say 3). He would say, “I have 5, so 6, 7, 8.”

This might be too tricky at first, so a little one can roll just one die and put those flower petals on. Then he can roll again and add that number of petals to the same flower. It is a great idea to really take our time when playing these games with our little ones. It is wonderful to help little ones notice that we added more cookies for the number 5 than 3. Or that the number 8 kind of looks like a snowman! Building a strong foundation in math takes time and lots of play. 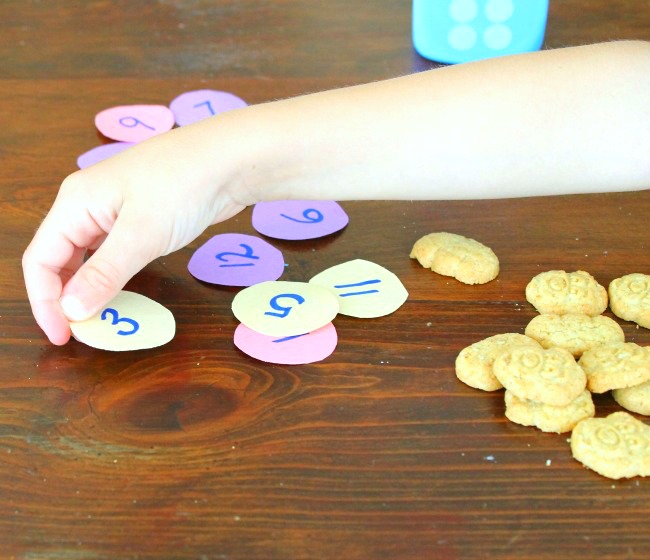 Afterwards, we played the same game but subtracted. I must say, Ben did not like this version nearly as much as he wound up with less cookies! This is excellent math in itself as little ones begin to realise adding gives you a bigger number than when you started, and subtracting gives you a smaller number. Ben would roll two dice and call out the biggest number. He would then count down the smaller number. So he would say, “I have 5 but I need to count down 3, so 4, 3, 2”.

If little ones are just starting subtracting, they can roll one die and add those cookies as the flower petals. They can then roll the second die and physically take the cookies away (just make sure they keep rolling until they get a smaller number). 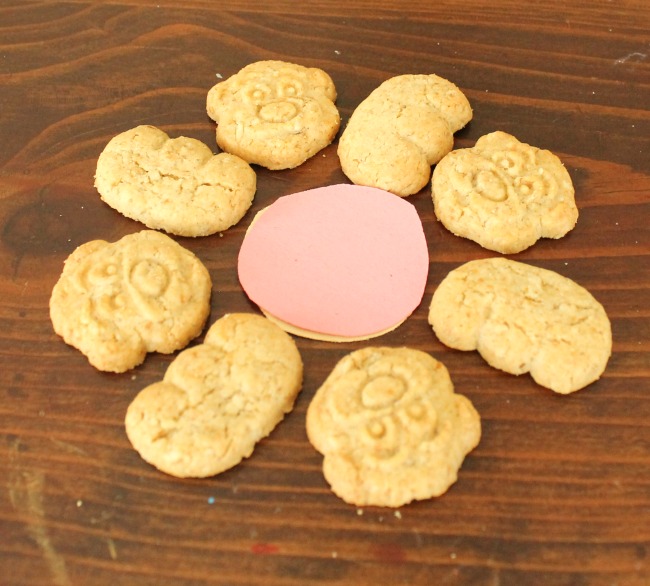 Patterning is another great math activity that has so many opportunities for play. My First Bear Paws have two shapes in each package: bear paws and bear faces. Ben took a blank flower centre and patterned the cookies around as the petals. At first he did a paw, face, paw pattern. I challenged him asking if you could think of a different pattern and he then did a paw, paw, face pattern. The cookies also come in two flavours (oatmeal and vanilla) so you could even make tasting patterns! 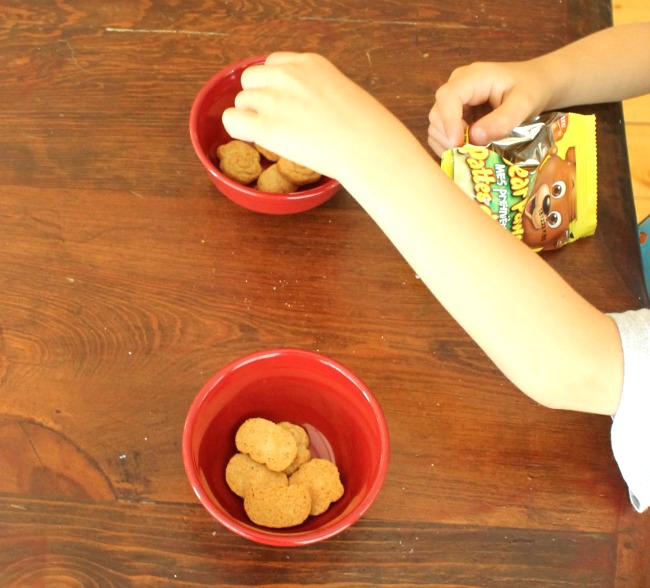 A final math game we played was sorting. We could sort the cookies by shape, but we could also sort them by people! At first I asked Ben to share a package of cookies with me, so he split a package into two bowls: one for him, one for me. I told him how kind he was to share the package fairly, but then I told him I wasn’t that hungry, so he could have twice as many as me.

His face lit up for a second and then he got a little confused asking how he could do it. I told him to think about it for a minute and talk it out with me. Pretty quickly he realised he could empty the bowls and start again, giving himself two for each one in my bowl.

I tell you, cookies are a pretty motivating way to overcome a challenge!

If you are concerned about all of the added sugar in your little ones diet, please learn more about Dare Foods My First Bear Paw Cookies at betterfirsts.ca. 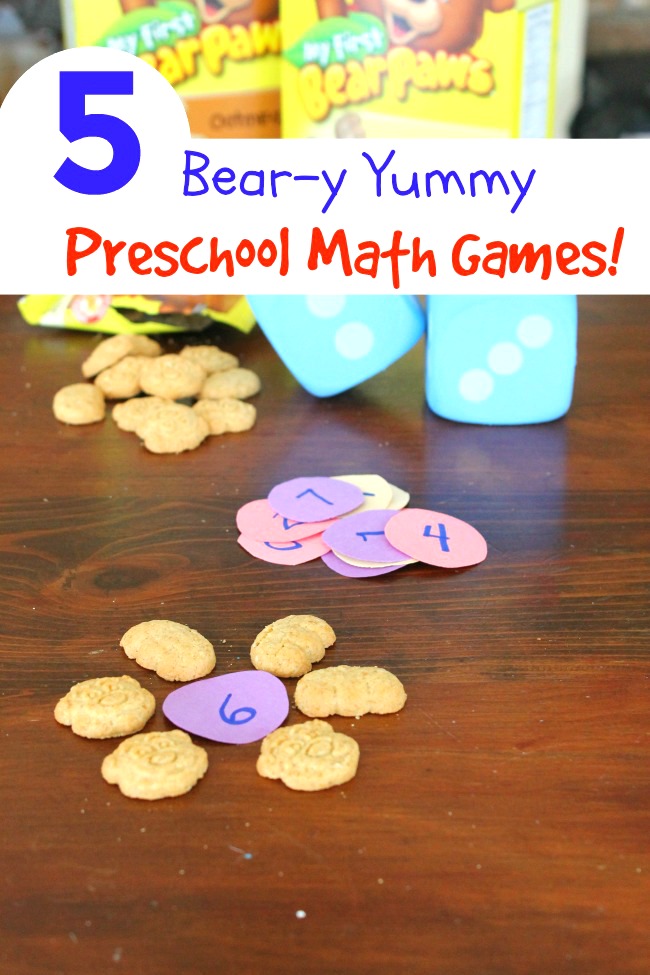 I hope a few of these math games are just right for you and your preschooler.

Thank you so much for reading friends.

« 43 Science Experiments to BLOW Your Kid’s Mind!
Welcoming Summer with My Little Ones »

This website uses cookies to improve your experience while you navigate through the website. Out of these, the cookies that are categorized as necessary are stored on your browser as they are essential for the working of basic functionalities of the website. We also use third-party cookies that help us analyze and understand how you use this website. These cookies will be stored in your browser only with your consent. You also have the option to opt-out of these cookies. But opting out of some of these cookies may affect your browsing experience.
Necessary Always Enabled
Necessary cookies are absolutely essential for the website to function properly. This category only includes cookies that ensures basic functionalities and security features of the website. These cookies do not store any personal information.
Non-necessary
Any cookies that may not be particularly necessary for the website to function and is used specifically to collect user personal data via analytics, ads, other embedded contents are termed as non-necessary cookies. It is mandatory to procure user consent prior to running these cookies on your website.
SAVE & ACCEPT
707 shares