There are certain posts that I never plan on writing. A post on how to make your own rollerskates? Definitely not something that I thought was in my wheel house to share.

However, amazing things can happen when you let little ones play, explore, and create – can’t they?

My Sam is the inventor behind these homemade rollerskates and I must say – they are super cool. And super easy too. 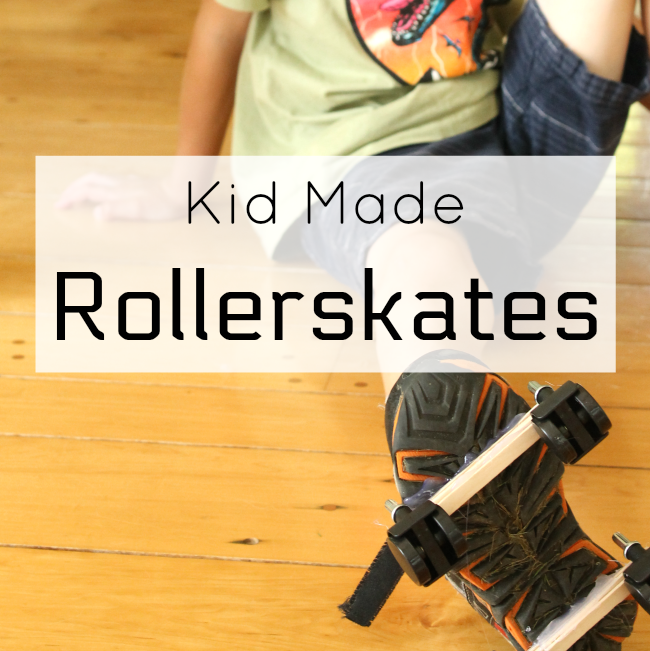 I thought it would be awesome if Sam would write to you about how he made them, but he did not think that would be nearly as awesome as I did. He is much more of a creator than a writer, though I feel that is rather common for 8 eight year old boys.

Luckily I am never shy for words so I am excited to share this with you on Sammy’s behalf.

We have had a large rubbermaid tower downstairs for as long as I can remember that we call the, ‘craft tower’. It is full of paint, paper, stickers, glue – all the good stuff. About a year ago I bought a second ‘craft tower’ but this time filled it will all sorts of doodads and trinkets. This one should be called, ‘the inventing tower’ but has somehow become known as, ‘the other craft tower’.

Luckily these children of mine are far more creative with inventing things than inventing names for things.

Whenever we get neat pieces of cardboard or styrofoam, I pop them in the tower. Cool pen lids, or pens that no longer write go in there too. We had some castors (you know, those little plastic roller ball wheels?) for a container we purchased but didn’t use, so they went down in that tower as well.

Sometimes the material in the towers sits for awhile while little minds think. Those castors had been in the tower for a month or so before creativity struck.

Sam brought them upstairs and said he was going to make rollerskates he just needed to figure out how. The first thought was to put holes in his running shoes so the little metal pieces of the castor could go right through. I was not a fan of this idea, but offered up some old shoes for the sake of learning and fun. Soon Sam realized that the metal pieces would stick through his shoes and hurt his feet, so decided against that.

I love when my little guys hit a challenge in their designs but they persevere and keep thinking. I don’t love so much when they then start thinking about getting out the power tools to cut wood and drill holes however …

I am all for creating, but I was in the middle of trying to make dinner — you know how these things go …

I suggested we hold off on the power tools and think about using smaller wood pieces – maybe popsicle sticks?

That was the ticket! Sam stacked 4 popsicle sticks on top of each other securing them together with a lot of hot glue. We were using a high-powered hot glue gun (I’m not sure if this will matter with the final product). 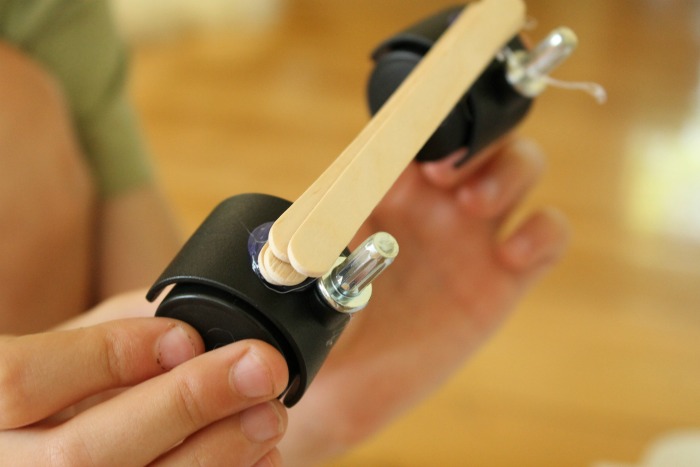 Next, he tested to make sure the popsicle sticks would hold his weight. They did! But one castor popped off, so more (much more) hot glue was added.

He made a second set of popsicle sticks and glued those to two more castors. Finally it was time to attach the popsicle stick/castor combos to the shoes.

The decision was to secure them using (you guessed it) even more hot glue! 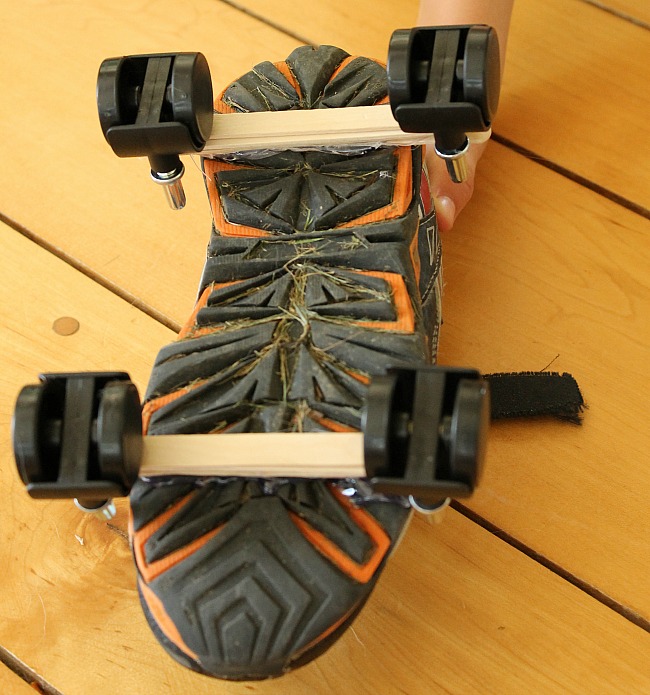 These homemade rollerskates really do work. Sam has only used them in the house but they have held up quite well. We have had one castor fall off, but the trick seems to be using oodles of hot glue. 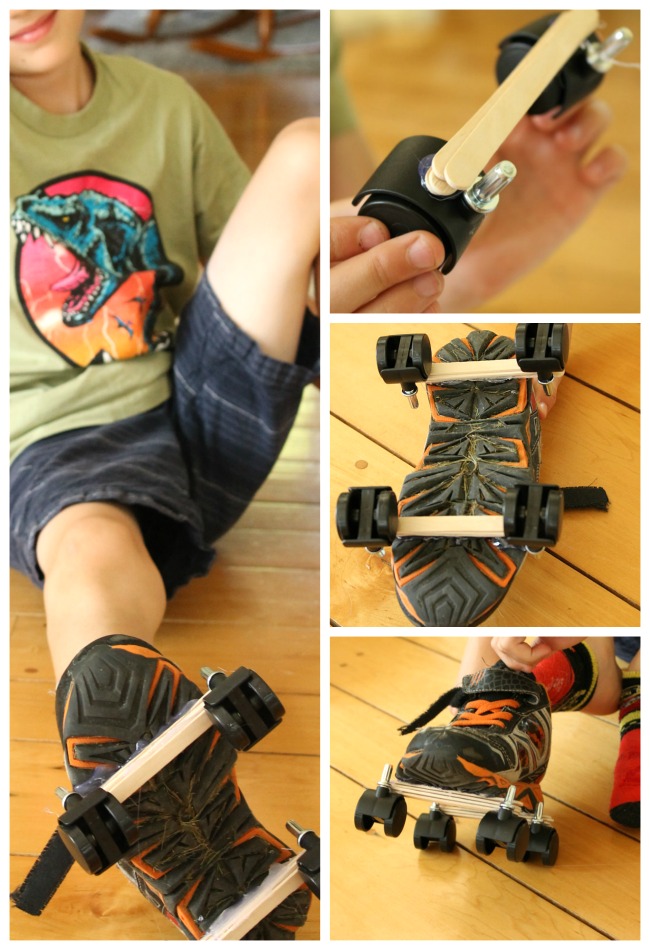 I don’t believe these will be ‘forever rollerskates’ to be sure. I’m thinking they will last more along the lines of a week or so, but you never know! 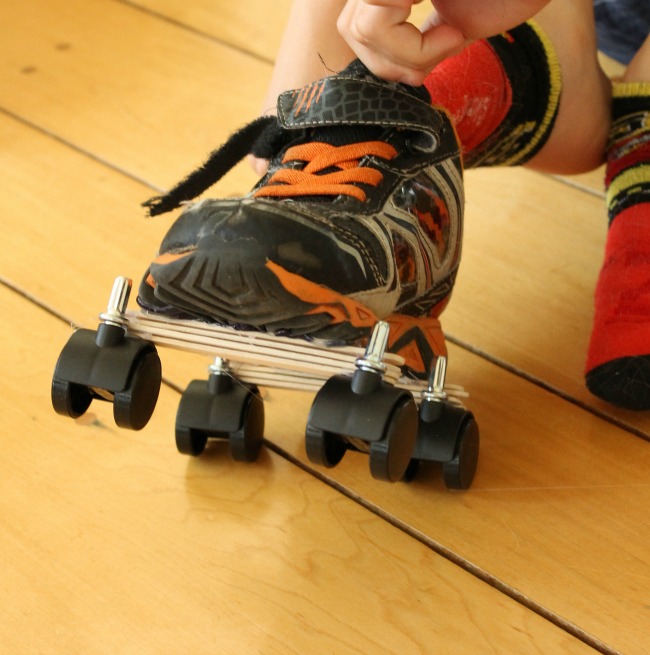 All of the learning that comes from projects like this is amazing! He used problem solving, spatial reasoning, science principles, math concepts, and so much more all through this neat creation. 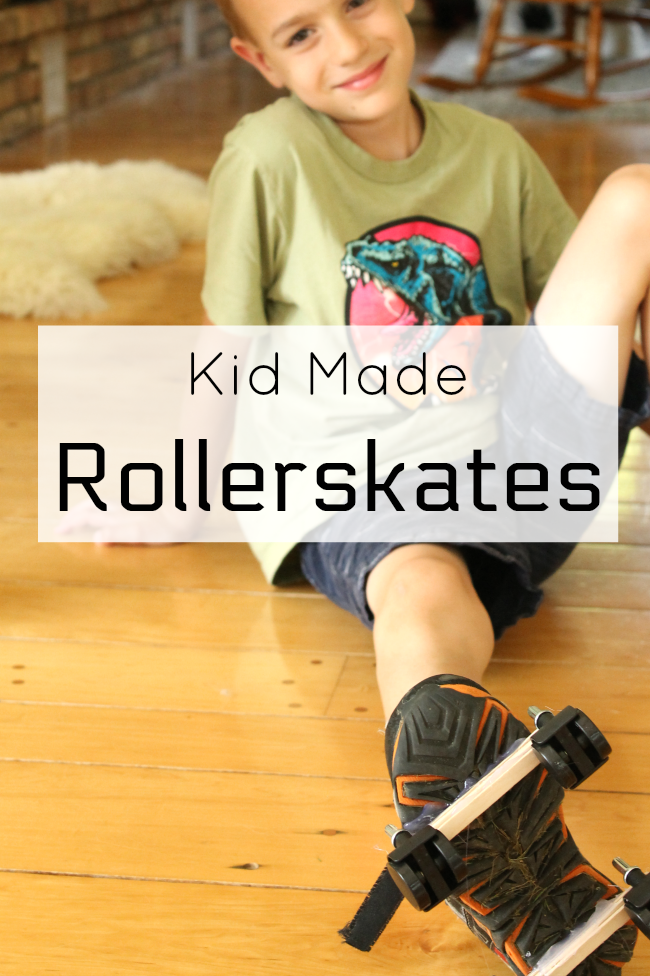 Creating an inventors tower, or “the other craft tower” was one of the best things I could have done to encourage creativity in our home. And it was one of the easiest too! It is really just like a great big junk drawer – and which house doesn’t have one of those!

Thank you so much for reading friends. I hope you are having a lovely Spring!

« For the LOVE of My Kids (The Quiet Time Mastery Series)
Crazy Fun Ways to Teach Summer Reading! »

This website uses cookies to improve your experience while you navigate through the website. Out of these, the cookies that are categorized as necessary are stored on your browser as they are essential for the working of basic functionalities of the website. We also use third-party cookies that help us analyze and understand how you use this website. These cookies will be stored in your browser only with your consent. You also have the option to opt-out of these cookies. But opting out of some of these cookies may affect your browsing experience.
Necessary Always Enabled
Necessary cookies are absolutely essential for the website to function properly. This category only includes cookies that ensures basic functionalities and security features of the website. These cookies do not store any personal information.
Non-necessary
Any cookies that may not be particularly necessary for the website to function and is used specifically to collect user personal data via analytics, ads, other embedded contents are termed as non-necessary cookies. It is mandatory to procure user consent prior to running these cookies on your website.
SAVE & ACCEPT
114 shares