Looking to make a dump truck craft that really works?  So were we – so we did – and it works!  Last week I wrote about 22 Amazing egg carton crafts for kids, and in that post was an idea from Rub Some Dirt on it Blog, on building a dump truck.  Have a click over to check out that idea – it’s a great one. 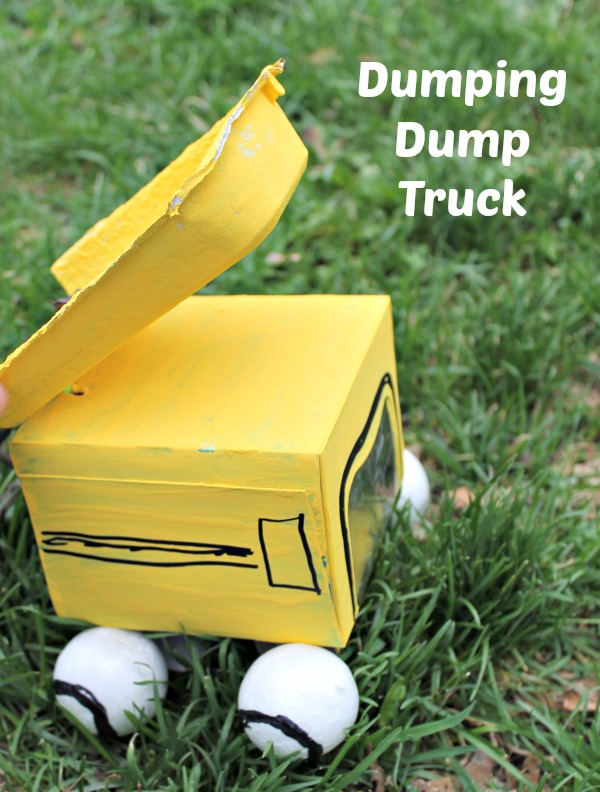 We used the same ‘mechanics’ for making our dump truck craft really dump, but decided to make ours a bit differently.

To make this dump truck craft:

We used: a paper towel roll, a small box, an egg carton lid, a pipe cleaner (or twist ties), a skewer and some styrofoam balls.  Though this craft was very much a ‘use-what-you-have’ sort of craft.  We routed through our recycling bins and cupboards and decided to reuse some treasures instead of recycling.

To begin, I poked holes in the box and the egg carton lid so they would attach together with the pipe cleaners and ‘dump’ (pictures a bit further down)

Then, we painted the box, paper towel roll, and egg carton lid.  Our box was actually a neat one left over from Easter.  It was actually neat for two reasons: first, and most importantly there was still some chocolate in it, and secondly it had a plastic window on the front making for an ideal windshield for our dump truck craft. 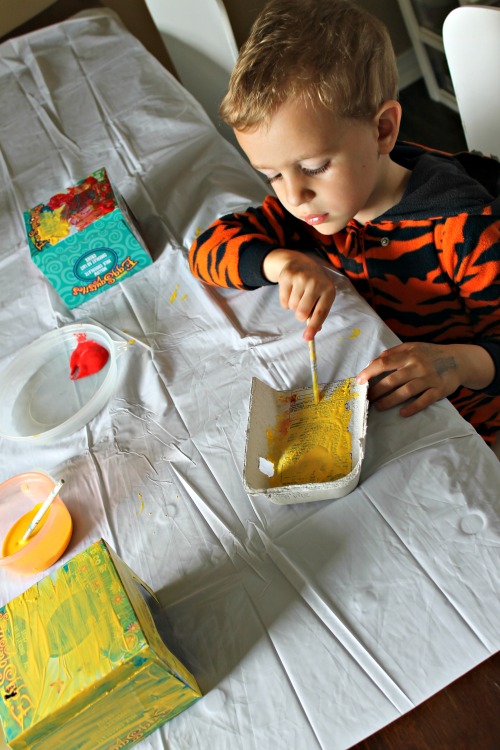 After the paint was dry, we got to assembling.  Sam helped thread the pipe cleaner through the holes of the box, and then through the egg carton lid.  Then we (I) hot glued the paper towel rolls to the bottom of the box.

Finally, we poked one styrofoam ball onto the skewer, put it through the paper towel roll, and then put a second styrofoam ball on the other end.  And we repeated for the third and fourth wheel.

I chose to let Sam play with the pipe cleaners and the egg carton lid to see if he could figure out how to make the dump truck craft really dump.  The pipe cleaners kept bending funny, so he did need some help threading the pipe cleaners where he wanted them to go, but once he managed to get them through the holes of the box he played around with a few ideas before getting his truck to really dump. He felt so proud of himself.  And he was sure to tell his Daddy that he was the one who figured out how to make it dump.  In fact, at the dinner table when we talk about the best part of his day – this was his.  Figuring out how to make his dump truck dump. 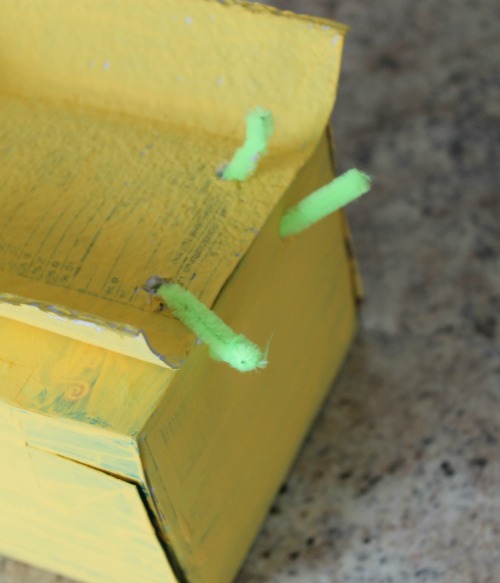 This truck craft for kids is so simple.  Using the idea of attaching two pieces together with pipe cleaners to make the dump truck dump is great and aside from this, you can use anything you have on hand to make a truck.  Perhaps you could even take a part a toy car (which, in case you missed this post on Exploring Toy Cars is so very simple!) Attaching the base to a toy car to your dump truck craft. 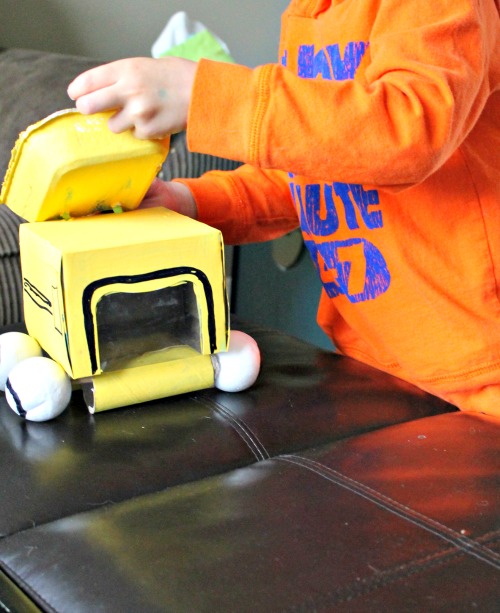 We love making recycled toys like this.  When my little ones have spent time creating it, they tend to spend a lot of time playing with it – and treating it carefully too.

Please consider liking us on Facebook so we can share more creative learning activities with you and your little ones!  Thank you!

This website uses cookies to improve your experience while you navigate through the website. Out of these, the cookies that are categorized as necessary are stored on your browser as they are essential for the working of basic functionalities of the website. We also use third-party cookies that help us analyze and understand how you use this website. These cookies will be stored in your browser only with your consent. You also have the option to opt-out of these cookies. But opting out of some of these cookies may affect your browsing experience.
Necessary Always Enabled
Necessary cookies are absolutely essential for the website to function properly. This category only includes cookies that ensures basic functionalities and security features of the website. These cookies do not store any personal information.
Non-necessary
Any cookies that may not be particularly necessary for the website to function and is used specifically to collect user personal data via analytics, ads, other embedded contents are termed as non-necessary cookies. It is mandatory to procure user consent prior to running these cookies on your website.
SAVE & ACCEPT
42 shares