It came!  It finally came!  And much in the Northern way we are used to — late at night, with barely a warning.  A good six inches at least … and on the very same night these newbie farmers ran out of propane in their big old farmhouse.  Oh yes, the snow.  And I do believe it is here to stay.

The kids were of course thrilled and by 9:30 that same morning they had already built a snow fort and gone sledding.  When I tried to make them come inside to warm up (well, kinda warm up due to the no propane thing) they insisted that first we build a snowman.  So we tried, the very best that a toddler and a preschooler and a playing-in-the-snow-but-really-stressing-about-the-propane Mama can.  But it wasn’t packing snow.

Any Canadian knows that the best time to build a snowman is when it is rather warm outside.  I tried to explain this to my little men, that it was too cold to build a snowman, the snow wasn’t ‘packing snow’.  They didn’t believe me at all.  “Snow HAS to be cold, Mama – you just want to go inside!”

And so, with the promise of some hot chocolate, we went inside.  Sitting beside our woodstove, we thawed out, sipped hot coco, and talked to the propane guy on the phone.  THEN, we decided to build a snowman inside. 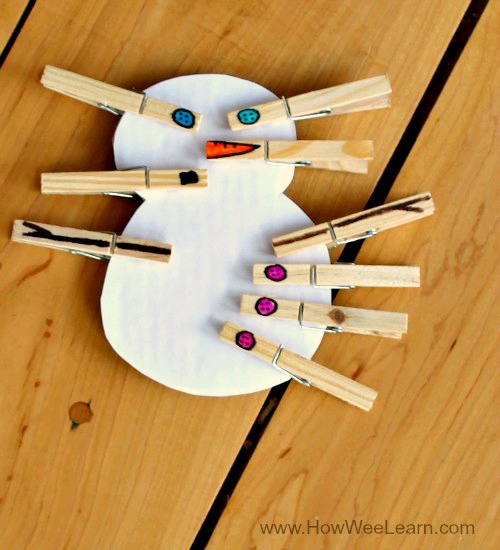 We are still very much on our clothespin kick.  Having been using them to learn to read, to play with patterns, and in fact to decorate our Christmas tree, it was only logical to build a snowman with them too.  Well, logical to most likely not.  But in this house, sound logic indeed.

I quickly cut a snowman shape out of some cardboard that was heading outside to be recycled.  I was very quickly told by Sam that I forgot a snowball.  Snowmen have 3 snowballs of course.  But without any more cardboard, he let it slide.  Well, sort of.  He did continually call it the 2 Snowball Snowman.

I then traced the cardboard cut out onto some plain white paper and cut it out.  Next I glued it onto the cardboard cut out – because for heavens sake, if the snowman was not going to have 3 snowballs, he at the very least must be white!  You could also use white paint, but we were excited to build and didn’t want to wait for any drying time.

Next I drew various things on the tip of clothespins: things that could be used for snowman eyes, noses, mouths, buttons, arms, and so on.

I was sure to make different mouth shapes so we could use this activity to work on emotions.  I also drew different coloured buttons so we could work on some patterning. 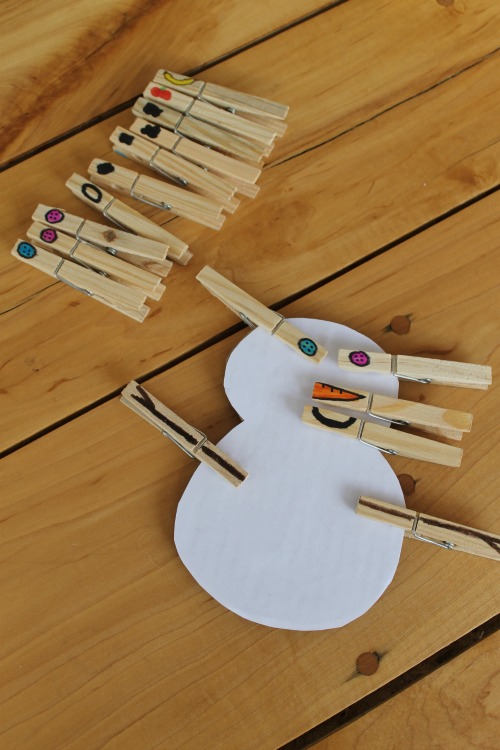 Likely most importantly, I drew some very out of the box things – an apple, a screw, a banana.  I wanted my little ones to get creative!

Of course I left some blank so my builders could add any item they felt necessary (this reminded me of an activity we did last year, The Drawing Chef).

The snowman was made in many, many different ways by Sam, my 4 year old.  And of course, eventually he wound up like this: 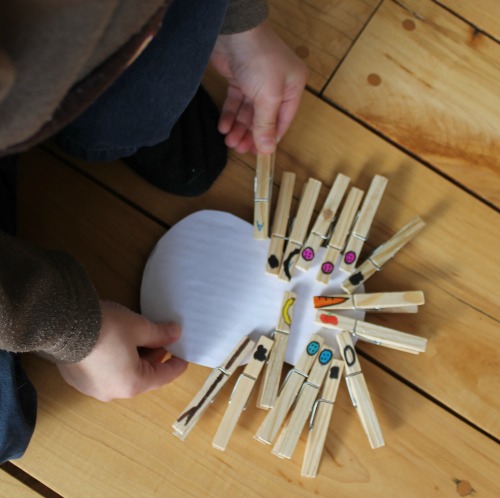 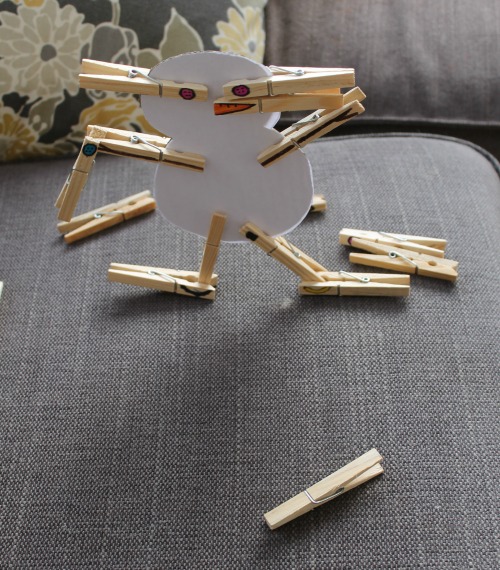 Benjamin, who is 2, really enjoyed this activity.  While he didn’t really try to put on eyes, nose, and a mouth, he loved clipping the clothespins to the snowman.

I used this activity as a way to encourage my toddler’s language development.  We would say the words as he clipped things on to the snowman and talk a lot about the activity.  “What should we use for the snowman’s eyes?” , “That’s right, pinch that clothespin really hard to open it really big”, “Wow, you are putting on a lot more pink buttons than blue buttons”.  And Ben would repeat many words too.

Working with clothespins is great for fine motor development and strengthening little hands for writing (down the road) as well.

This snowman activity definitely did the job holding over my little ones until the snow is right to build a real snowman.

And holding over Mama until the propane arrived.

Please consider liking us on Facebook so we can share more creative learning activities with you and your little ones.  Thank you!

« How-to: Teach Kids to Set {and ACHIEVE} Goals!
STEPPING Up the Reading! »

This website uses cookies to improve your experience while you navigate through the website. Out of these, the cookies that are categorized as necessary are stored on your browser as they are essential for the working of basic functionalities of the website. We also use third-party cookies that help us analyze and understand how you use this website. These cookies will be stored in your browser only with your consent. You also have the option to opt-out of these cookies. But opting out of some of these cookies may affect your browsing experience.
Necessary Always Enabled
Necessary cookies are absolutely essential for the website to function properly. This category only includes cookies that ensures basic functionalities and security features of the website. These cookies do not store any personal information.
Non-necessary
Any cookies that may not be particularly necessary for the website to function and is used specifically to collect user personal data via analytics, ads, other embedded contents are termed as non-necessary cookies. It is mandatory to procure user consent prior to running these cookies on your website.
SAVE & ACCEPT
2908 shares