What is the most important thing for toddlers to learn?  What is the one thing, above all others, that will benefit these wee ones most in their years ahead?  Of course there are many opinions to these questions – but want to know what I think? 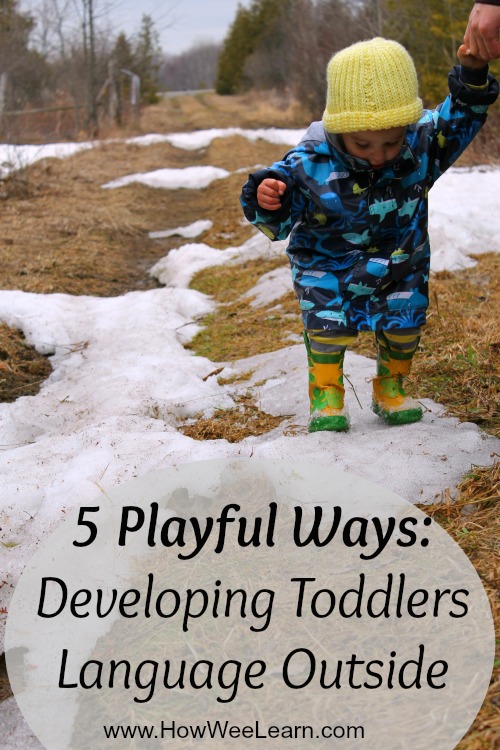 I believe (very strongly.  VERY strongly) that above all else, the development of oral language is the single most important learning activity for a toddler.

Hands down. THE most important. (Alright already, you get it). I do not simply mean learning to talk, but being exposed to “rich” language.  I do this with my little ones in two ways: talking, and reading.

The importance of reading is huge – but today, I want to share with you how simple it can be to provide rich language development activities for toddlers.  And the place I love developing language the most is in nature.

While teaching Kindergarten I was constantly bringing nature indoors to expose the children to new things and words to develop this rich oral language.

One of the most wonderful things about being home with my own little ones is that we can actually BE outside and especially, in the woods.

Both Sammy and Benjamin love to be outside exploring – as do I.  And the woods is full of interesting and inspiring things to talk about.  While on a nature walk recently I really focused on using some “rich” language.

By this I mean using descriptive and detailed words, proper terms, comparing words, and such.

Here are 5 of the language development activities for toddlers we enjoy outside: 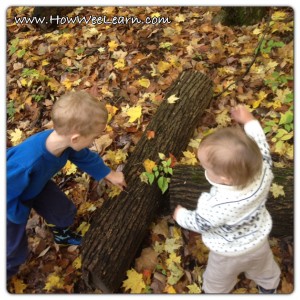 While walking in the woods there was a fallen log over the path.  We started talking about ways we could get past this big log.

Should we go over/under/around/or through?  We quickly decided we could not go through the log, and we were not tiny enough to go under it.

Sammy decided we should go over, so we talked about stepping our feet up “incredibly” high as we got over it. 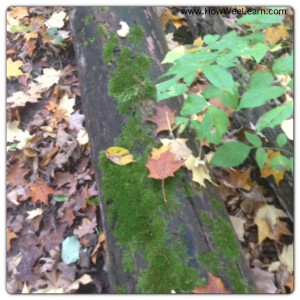 Next I focused on some describing words.  There was some moss growing on a log which had caught Sammy’s attention so we started describing the moss.

I asked Sammy some questions to help him describe the moss (How does it feel?  Where is it on the log?) Sometimes Sammy would answer with some simple words, like, ‘it is on top of the log’.

I would use this to extend or deepen his understanding by saying, ‘yes, it looks as though it is spreading all over the top of the log.  Isn’t it neat how it is spreading in patches?  There is a huge patch of moss here, and little tiny patches over there.’

I also try to use describing words when we are talking about animals or any nature thing we should see.  Instead of saying, ‘Look at the mushroom’ to my tiny toddler, I might say ‘Look at that little brown mushroom”. 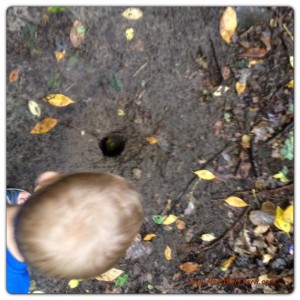 Other describing language development activities for toddlers that we do on our nature walks are describing things we see, hear, smell, and touch.

When we spied the hole pictured above, we described it as a dark, deep, mysterious hole – and guessed whose home it may be.

The tree on a bark may feel rough, bumpy, smooth, hard, spongy, damp, dry, crumbly, and many other ways too!  There is so much language that can be developed in nature.  A squirrel may be scurrying or rustling in leaves, clambering up a tree, racing through the tree tops, or nestling into a nest.  Insects may be little, tiny, or relatively big – they might be brightly coloured, or camouflaged with the tree bark. 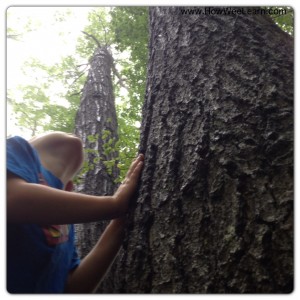 I never hesitate to use big words with my little ones.  I will often introduce these words in a way that connects to what they are saying.

For example, when Sammy told me he saw a big tree, I responded by saying, ‘Wow, that tree IS enormous.”  This is a nice easy way for Sammy to begin making connections between words and for him to begin to understand that the word big must be related, somehow, to the word enormous.

Often my little ones will try out these big words in the next few days – sometimes correctly (“That spider is enormous!” – and yes, unfortunately there was an ENORMOUS spider inside)

And sometimes not correctly – “I am an enormous brother”. When Sammy uses a word not exactly right, I will adjust his words, “You are a big brother yes – enormous means a really huge size” and leave it at that.  As he plays with these words he is building his oral language all on his own. 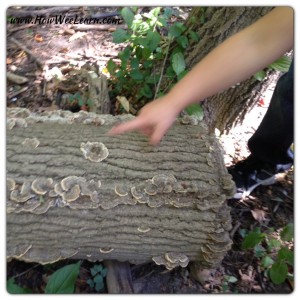 Other language development activities for toddlers are comparing and contrasting items.  This activity really helps to deepen a wee ones understanding of their world and helps them make connections.

A good example of this is when we were looking at some insects.  Sammy was calling any little crawling insect an ant. Instead of simply telling Sammy that he was looking at a ladybug, we compared the two insects.  It was pretty simple to see the differences between them once he looked.

By making these comparisons he is growing his language and making very important ‘hooks’ for further learning.  Now that he knows an ant and ladybug are different, he will be much more likely to question other insects when he sees them next.

Language development activities for toddlers are very important.  Providing rich language can be so very simple.

Very often it simply involves slowing down, and exploring with your child.  Adding in a thought, a word, or a comparison as you explore and play together can make such a huge difference to your child’s later literacy development.

On days when I am feeling overwhelmed with all I am to do. I simply take the kids outside.  We play, explore, create, and learn naturally.  And we all feel good about it.

Thank you so much for reading!

Please consider Liking us on Facebook and Following on Pinterest for more creative learning ideas for your wee ones!

This website uses cookies to improve your experience. We'll assume you're ok with this, but you can opt-out if you wish.Accept Read More
Necessary Always Enabled
112shares