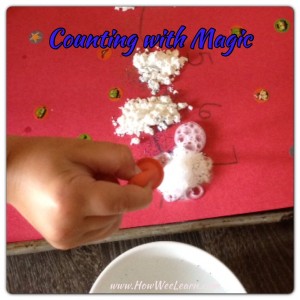 My Sammy is fussy with counting games.  He is a very busy wee one, this boy of mine.  The idea of sitting still to focus on numbers and counting games is not really his thing.  So I brought out some magic – and poof! – he couldn’t wait to count!

This counting game is super simple.

To begin, simply put a certain number of stickers on the paper and write possible numbers underneath.  For example, I put 8 stickers on the sheet and wrote the numbers 2-9.   You could just write 1 or 2 numbers if your wee one is new to counting games.

Next, I gave Sammy a Magic Wand and a bowl of vinegar 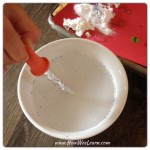 He counted the stickers very carefully with his wand (practicing one to one correspondence by touching his wand to each sticker as he counted).  When he discovered the number of stickers, he filled his wand with vinegar and looked for the matching written number.  Sammy is still working on this area, so I said the number rhyme as he searched.  Eight was “Make an S and close the gate, that’s the way we make an 8”.

Once he found the number, he made up some magic words (which was very cute, as it was an addition to the counting game of his very own) and dropped the vinegar onto the pile of baking soda under the 8. 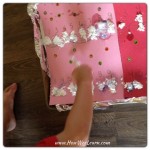 This magic counting game was loads of fun for my preschooler.  He played each game again after he finished.  I had to add a little more “magic powder” for the 3rd round.

He practiced his counting, one to one correspondence, number matching, and fine motor skills with this activity.  This counting game was a great way for us to add a little play and imagination to learning numbers.

What is your favourite baking soda and vinegar game?

This website uses cookies to improve your experience while you navigate through the website. Out of these, the cookies that are categorized as necessary are stored on your browser as they are essential for the working of basic functionalities of the website. We also use third-party cookies that help us analyze and understand how you use this website. These cookies will be stored in your browser only with your consent. You also have the option to opt-out of these cookies. But opting out of some of these cookies may affect your browsing experience.
Necessary Always Enabled
Necessary cookies are absolutely essential for the website to function properly. This category only includes cookies that ensures basic functionalities and security features of the website. These cookies do not store any personal information.
Non-necessary
Any cookies that may not be particularly necessary for the website to function and is used specifically to collect user personal data via analytics, ads, other embedded contents are termed as non-necessary cookies. It is mandatory to procure user consent prior to running these cookies on your website.
SAVE & ACCEPT
56 shares