We are big on crafting around here.  I love creating, and I have passed that love along to my own little ones.  This afternoon, while the boys were resting and Madeline was busy, I did some creating all on my own.  And it was lovely!  I found a picture of this pebble art idea on Etsy, and that talented artist was selling her creations.  I thought I would give it a whirl on my own – and I was so happy with the results.  This art project could easily be done by little ones, and my kids have already played around with some pebble art ideas. 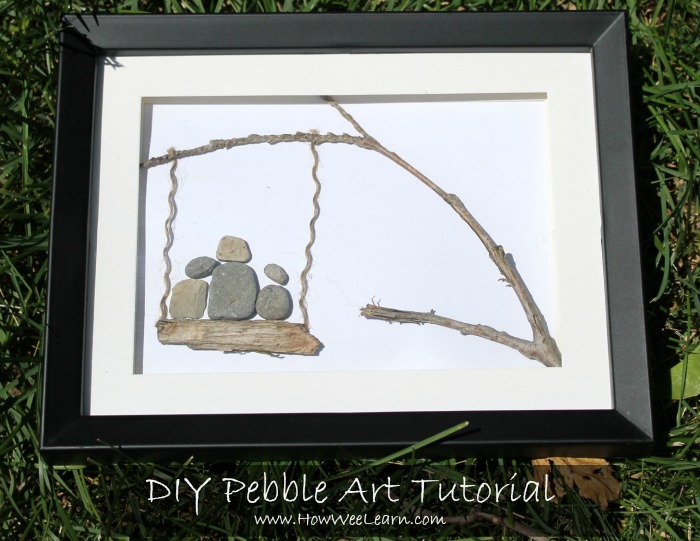 I opted to do it on my own this first time, as I knew I would have to play around with different kinds of glue and natural material.  I have found it best, when I have something in particular in mind that I do it on my own at first.  That way I have a chance to figure things out and fulfill my own curiosities, making me more open to letting my little ones create as they choose.

To begin with, go on a hunt for some smooth, flat rocks.  The trick is to find rocks that are quite thin and don’t have too many lumps or bumps.  The beach would be ideal, but we just used our road outside.  We also found some twigs and tiny pine cones, just in case.  My kids did this part with me, no questions asked.  “Let’s go outside and find some rocks” — shoes on, door swings shut before I finish my sentence.

Next, I washed up the rocks.  I just used a damp cloth to remove and visible dirt and let them air dry.

After, I played with some different picture ideas.  I tried mimicking the one I had found on Etsy, played with a bonfire idea, and settled on a sweet tree swing picture, with my three little ones swinging under the shade of a tree.  This was a pretty easy decision as we are anxiously awaiting a move into our country dream home, and one of the things my kids have been most looking forward to is building a big tree swing. 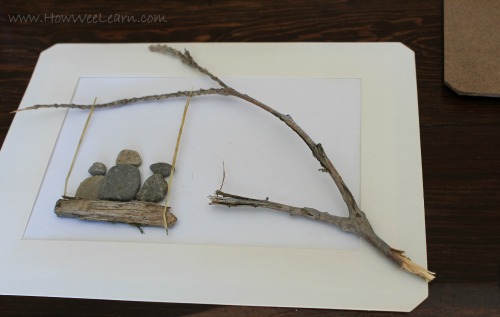 Once I settled on a scene, I dug up a frame.  I had originally purchased this one from the dollar store – it is not an actual shadow box frame, but has a bit of depth from the glass to the backing – about 3 centimeters, which was plenty.

I removed the back of the frame and cut a border that was the same size as the border on the picture.  I taped this on to the backing.  This way I could tell how much of my scene would be visible from the frame.

After, I set the scene up on the backing until I was happy with it.

I then experimented with some different kinds of glue.  Hot glue worked, but I didn’t think it would hold up well after some time passed.  Gorilla glue worked, but I had trouble keeping the glue from showing since it puffed out so much.  I found that super glue worked the best, it just required a bit of patience. I had to hold each item down for about 15 seconds or so before moving on.

I began by gluing the stick on as the tree.  This was the trickiest one to glue down surprisingly, but it did work with the super glue it just needed some extra time being held.  I added glue and held it down for about a minute. 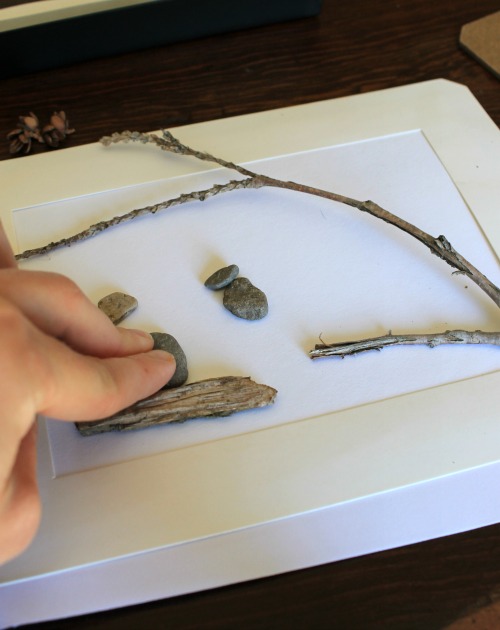 I then glued on the piece of bark as the swing and each little pebble for my babes bodies and heads.  I opted to keep it very simple with just heads and bodies, though I may play with arms when we create more pebble art later on.  I took my time positioning the stones for the bodies and head, I wanted to create a feeling of closeness and love on the swing, and I think I managed by carefully looking at the angles of the rock and trying to get a scene of heads resting and gazing.

I ended up using some twine (unwound so it was only one thread) as the swing ropes. I had tried to use hay, but I couldn’t get it to stick.  The twine was tricky to stick on, but it did stick eventually. 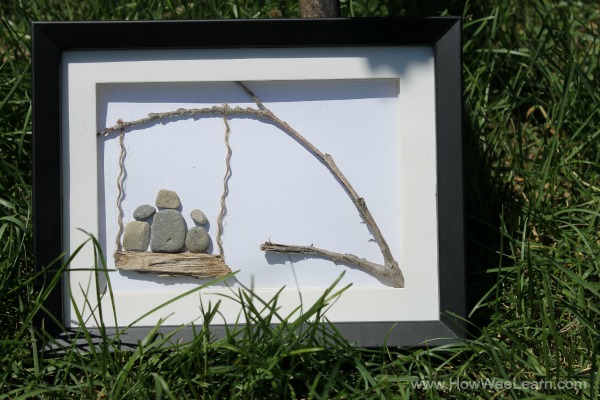 Once it was all dry I put it in the frame – and I am so happy with how it looks!  This sweet picture, which holds oodles of meaning to me, cost a grand total of $2.  $1 for the frame, and $1 for the super glue.

I love making my house look nice, and I love doing it myself.  This pebble art project was tons of fun, and turned out great.  I am eager to create more works of art with my little ones.  They will be able to do it all on their own, I will just do the gluing when they are done creating their scenes.

Please consider liking us on Facebook for more creative art projects!  Thank you!

« Playdough in the Backyard
9 UNIQUE Outdoor Activities for Babies »

This website uses cookies to improve your experience while you navigate through the website. Out of these, the cookies that are categorized as necessary are stored on your browser as they are essential for the working of basic functionalities of the website. We also use third-party cookies that help us analyze and understand how you use this website. These cookies will be stored in your browser only with your consent. You also have the option to opt-out of these cookies. But opting out of some of these cookies may affect your browsing experience.
Necessary Always Enabled
Necessary cookies are absolutely essential for the website to function properly. This category only includes cookies that ensures basic functionalities and security features of the website. These cookies do not store any personal information.
Non-necessary
Any cookies that may not be particularly necessary for the website to function and is used specifically to collect user personal data via analytics, ads, other embedded contents are termed as non-necessary cookies. It is mandatory to procure user consent prior to running these cookies on your website.
SAVE & ACCEPT
2812 shares