There are a few things that I find are coming to me with age. One of which is pairing things down — or simplifying, I suppose.

We were at our local Children’s Museum last week and there was the neatest (hugest) marble (well ball) run. It was made on a great big metal wall with PVC piping and magnets.

My initial thought was, “AWESOME. We need to do this at home — maybe outside on the barn?” But my second thought was, “WAIT. Let’s do the same thing but smaller — maybe on the fridge?”

Yes, second thought Sarah seems to be quite rational. 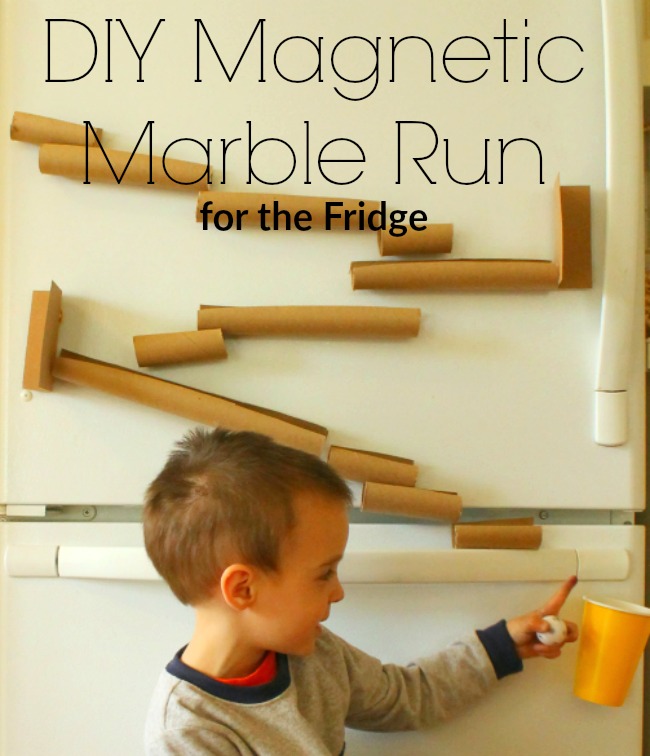 So that is just what I did. I took that fabulous idea of a magnetic marble run that children could easily manipulate and paired it down to fit on our fridge.

And even better – it fits into one of our Quiet Bins. (Oh goodness – this one should have definitely been in my book! But there is a whole year worth of other Quiet Bin ideas if you are interested.)

This magnetic marble run has been a huge hit with my little guys. And since they both have taken to wanting to be with me in the kitchen while I am cooking (which is quite sweet), it gives them a little something to do when they are tired of helping (but Mama still needs to cook – even if she’s tired of it). 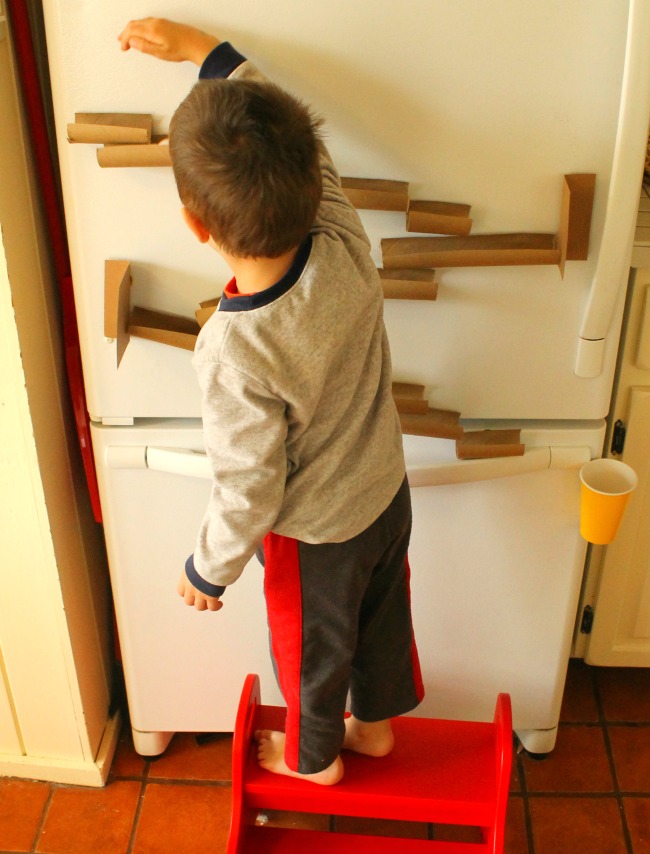 I cut the tubes into various lengths and cut a good size strip off the top to make them shaped like a “U”.

Next, I hot glued some magnets I had picked up from the Dollar Store. I added one to each end of the tube so the tubes would be nice and secure on the fridge. 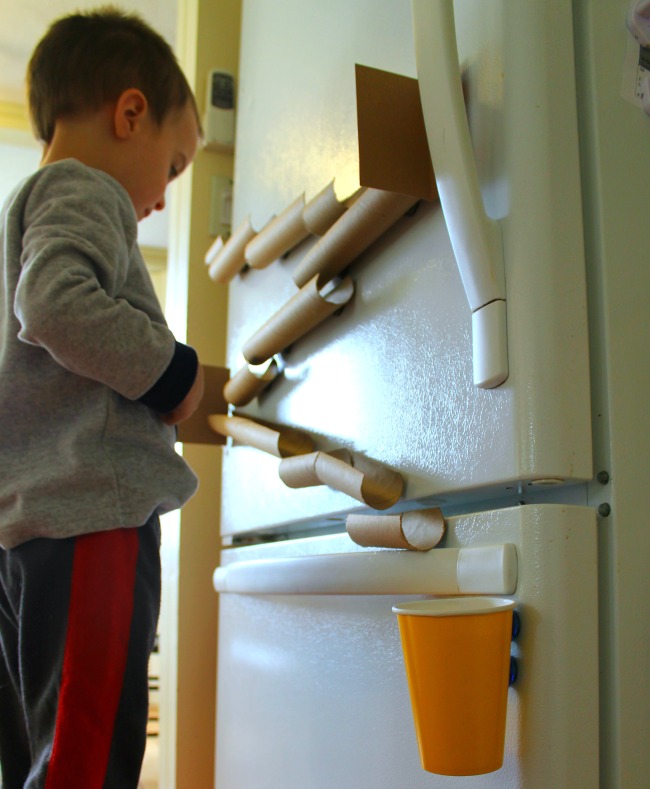 The longer tubes, as it turned out, should have had three magnets to really hold them in place. With two they slip a little, changing the slope when the marble hits them.

I also added a couple of squares of cardbard to act as “blockers”. These were great for places where the tubes were placed to steep and the marble would jump out. 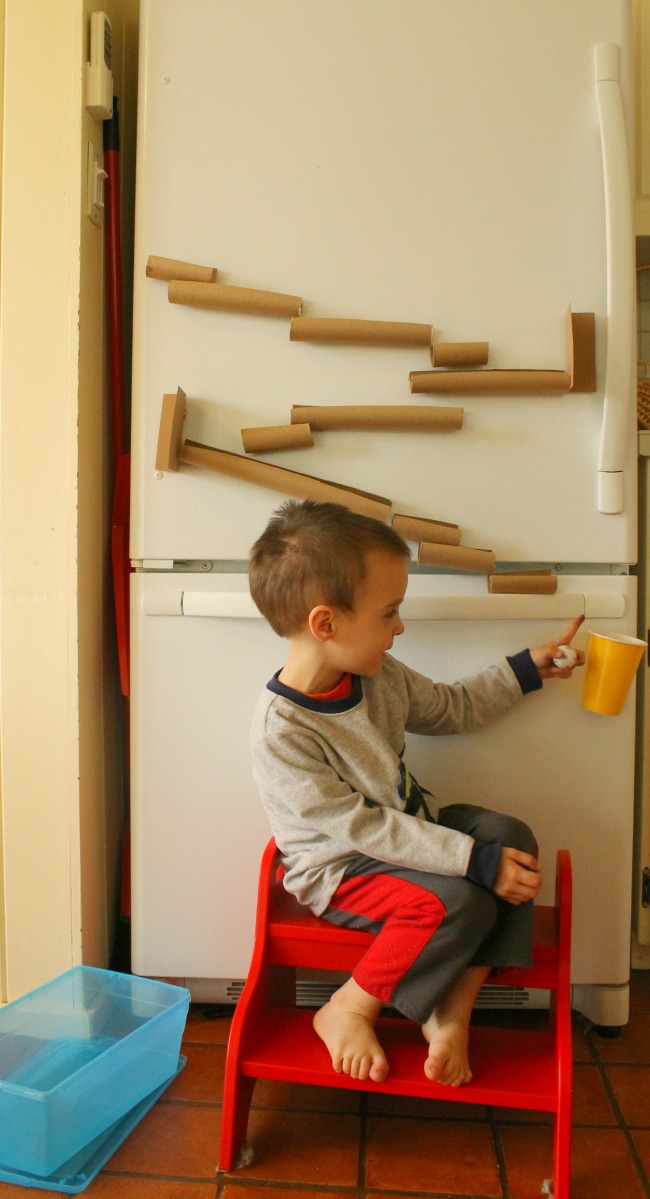 I also added a paper cup that the boys could use at the end of their marble run to catch the marble.

I left this as an “invitation” – meaning I left it open for them to explore and use exactly as they wanted. I didn’t suggest they make the marble land in the cup, for example, I simply added the cup so they could discover that might be a great way to catch the marble.

There is so much learning in this playful invitation. My little guys are learning about slope, speed, and distance — and even learning the foundations for the rise over run concept — though of course they don’t know they are learning any of that. They just know it is awesome.

Not quite as awesome as it would have been on a huge magnetic barn wall with PVC pipes — but awesome all the same.

Thank you for reading friends, I hope you are having a lovely start to your week!

This website uses cookies to improve your experience while you navigate through the website. Out of these, the cookies that are categorized as necessary are stored on your browser as they are essential for the working of basic functionalities of the website. We also use third-party cookies that help us analyze and understand how you use this website. These cookies will be stored in your browser only with your consent. You also have the option to opt-out of these cookies. But opting out of some of these cookies may affect your browsing experience.
Necessary Always Enabled
Necessary cookies are absolutely essential for the website to function properly. This category only includes cookies that ensures basic functionalities and security features of the website. These cookies do not store any personal information.
Non-necessary
Any cookies that may not be particularly necessary for the website to function and is used specifically to collect user personal data via analytics, ads, other embedded contents are termed as non-necessary cookies. It is mandatory to procure user consent prior to running these cookies on your website.
SAVE & ACCEPT
154 shares