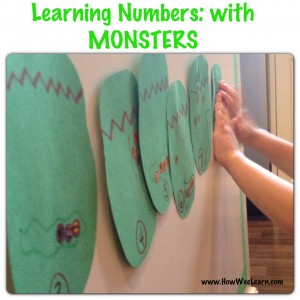 In the video I posted I talked all about different ways wee learn numbers in my house with these number monsters.  Sammy has been loving these little monsters that we made, so I wanted to share with you how he has been using them, for those who prefer a post over video.

Sammy is able to count well and is beginning to gain an understanding of the meaning behind each number (that 3 means it holds a value of 3 ‘things’).  One of the activities we have been practicing is ordering.  Starting at one, or for a little added complexity, a different number, and counting up (or down) 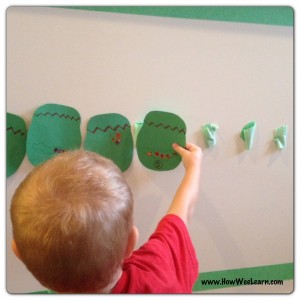 Sometimes he would get stumped about which symbol represented each number, so he would count the stickers.  This was a great way for him to be independent and solve his questions all on his own. 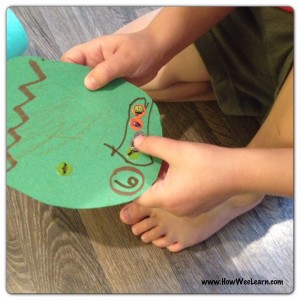 We worked a lot on sorting as well.  I would give Sammy some sort of direction, and he would have to decide which numbers fit.  For example, which numbers are greater (or bigger) then 3 – he would sort through the cards and stick the correct ones onto the wall.  We did this for:

Numbers bigger or smaller then a given number 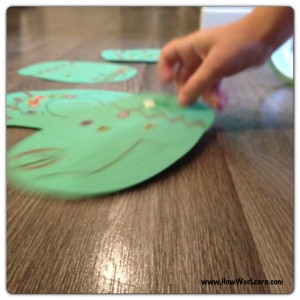 And we usually finished with playing one of Sammy’s favourite games – Monster Smash.  I would call out a number and he would swat it with a foam pumpkin attached to a pipe cleaner.  It’s a great activity to do for wee ones who like to be moving – and don’t they all?! 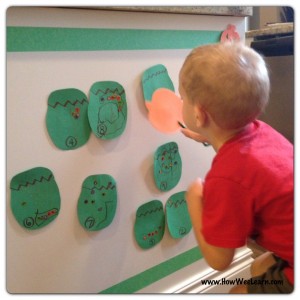 These cards could be made seasonal (such as our Monsters for Halloween) or could simple be made out of regular construction paper squares.  I was very surprised with how much my Sammy took to them!

Do you know any great Monster songs for kids?