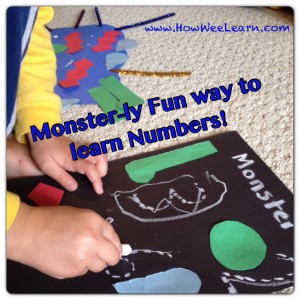 Is it too soon for a Halloween craft?  Not in our house!  I love Holidays or Celebrations of any kind – and so do my wee ones.  Our monster numbers activity we had been doing led us very nicely to this Halloween Craft.  It is monster counting in a craft form. 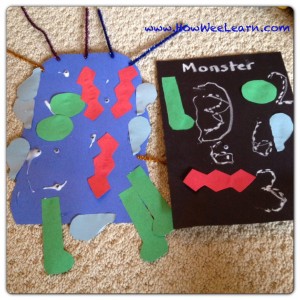 I have done two versions of this Halloween Craft before.

The first version is to give wee ones a sheet of visual instructions to follow, like this: 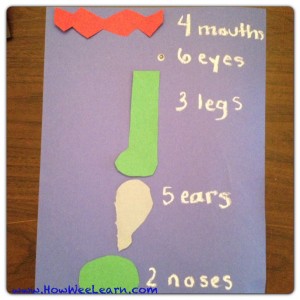 Then wee ones complete their Halloween Craft monster by following those instructions.

The second version I chose for my Sammy and it works better, perhaps, for wee learners who would rather give the directions then follow.  Still a very important skill!  For this version of the Halloween craft I provided Sammy with all of the materials so he could complete his monster however he would like.  I provided: 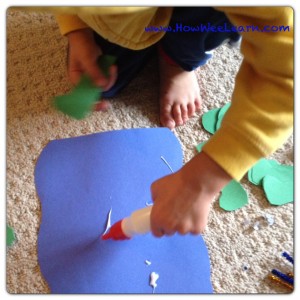 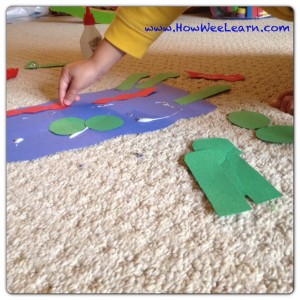 When he was finished his Monster, we wrote a description of that monster.  I had glued all of the body parts we had used on to a sheet of paper.  Sammy then counted how many mouths his monster had and wrote the number beside the picture of the mouth.  He is just beginning to write, so he asked me to do dots for the numbers.  We used black paper with chalk, just as something different. 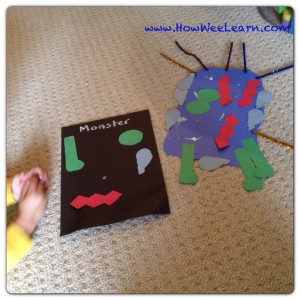 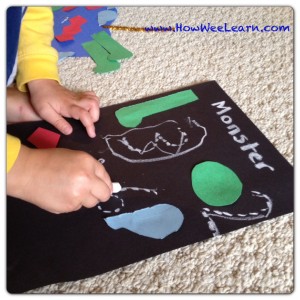 This activity could easily be completed time and time again by simply not gluing the body parts.  Sammy loves gluing, so I knew that would make the activity much more engaging for him.

Halloween crafts provide a fun, different way for wee ones to practice foundational skills such as counting, writing, and following directions.

I think Sammy’s Halloween craft counting monster looks very cute.  Once it is dry we will hang it up and it will officially be our first Halloween decoration.

What is your wee ones favourite Halloween Craft?

This website uses cookies to improve your experience while you navigate through the website. Out of these, the cookies that are categorized as necessary are stored on your browser as they are essential for the working of basic functionalities of the website. We also use third-party cookies that help us analyze and understand how you use this website. These cookies will be stored in your browser only with your consent. You also have the option to opt-out of these cookies. But opting out of some of these cookies may affect your browsing experience.
Necessary Always Enabled
Necessary cookies are absolutely essential for the website to function properly. This category only includes cookies that ensures basic functionalities and security features of the website. These cookies do not store any personal information.
Non-necessary
Any cookies that may not be particularly necessary for the website to function and is used specifically to collect user personal data via analytics, ads, other embedded contents are termed as non-necessary cookies. It is mandatory to procure user consent prior to running these cookies on your website.
SAVE & ACCEPT
67 shares