I am so excited to partner with Little Experimenters today to bring you this post about the Illuminated Interactive Globe and Smart Talking Pen. This post contains affiliate links.

I bring you … The Illuminated Interactive Globe and Smart Talking Pen by Little Experimenters! 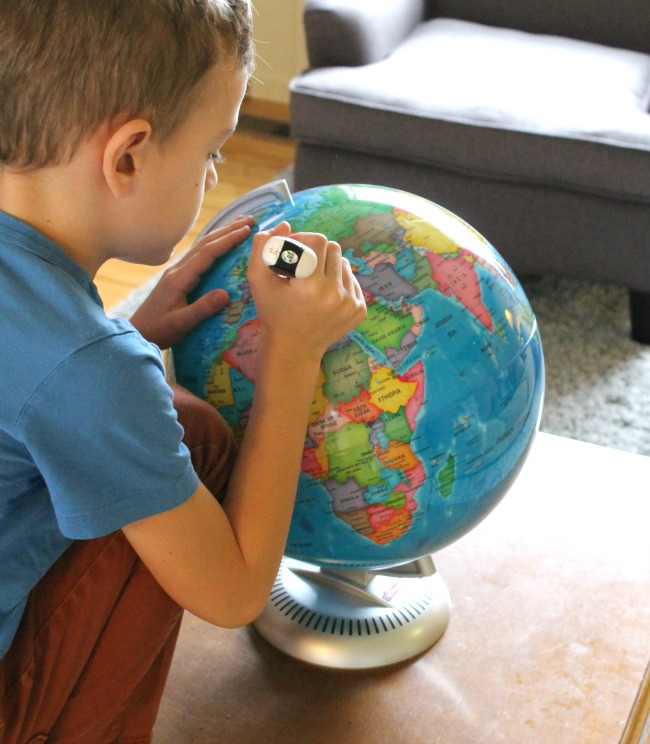 If you are familiar with this space I have created and have visited me before, you may have noticed that I come across a little nerd-ish perhaps. So it wouldn’t surprise you to hear that I always did very well in school.

except for geography. I will never forget the time my Grade 4 teacher gave us a quiz, “just to find out what we knew about the world” and I received a 4 out 50. I was absolutely mortified!

Ever since then I have been very intrigued by learning about this amazing world of ours. When I saw this Interactive Globe I thought it would be a fantastic learning tool for my 7 year old.

I simply popped the batteries into the Interactive Pen and that was all the set up there was. 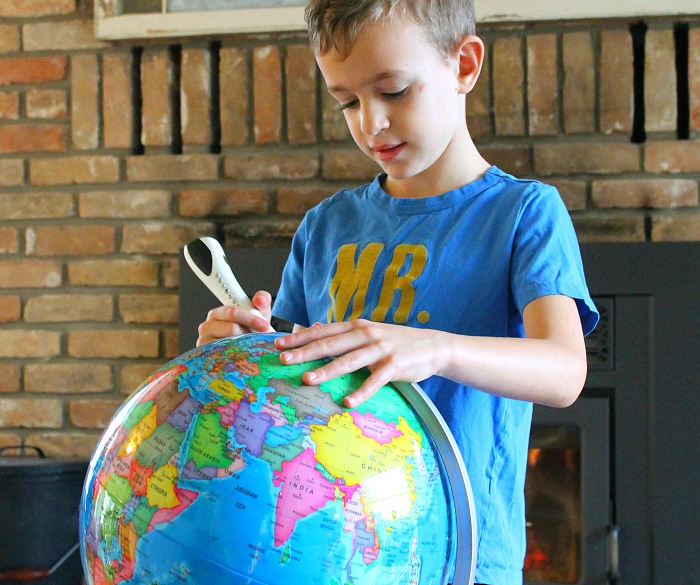 We could then touch the pen to three dots:

Country and Ocean – where the pen would then tell us the names of the Countries and Oceans when we touched them with it.

National Anthem – where the national anthem of the Country would be played when we touched it with the pen (which is unbelievably cool and amazing).

Major Cities – where the pen would tell us the name of the major cities in all of the Countries when we touched them.

Once we explored the globe for a long while using these three options, we attempted to play the games!

We then touched our pen to ‘Game A’ and then (as Mama started sweating with her flashback to Grade 4 all over again) we touched the pen to question ‘1’.

The questions were tricky for us, but very interesting! We got three chances to answer the question correctly (by touching the pen to the Country or city that was the answer). Our first question was, “What Country is J.K. Rowlings, who wrote Harry Potter, from?” Luckily my little partner is a HUGE Happy Potter fan.

We definitely need to do some more practising before we will win either of the games. It is a really great incentive for listening to the interesting facts about each place though. 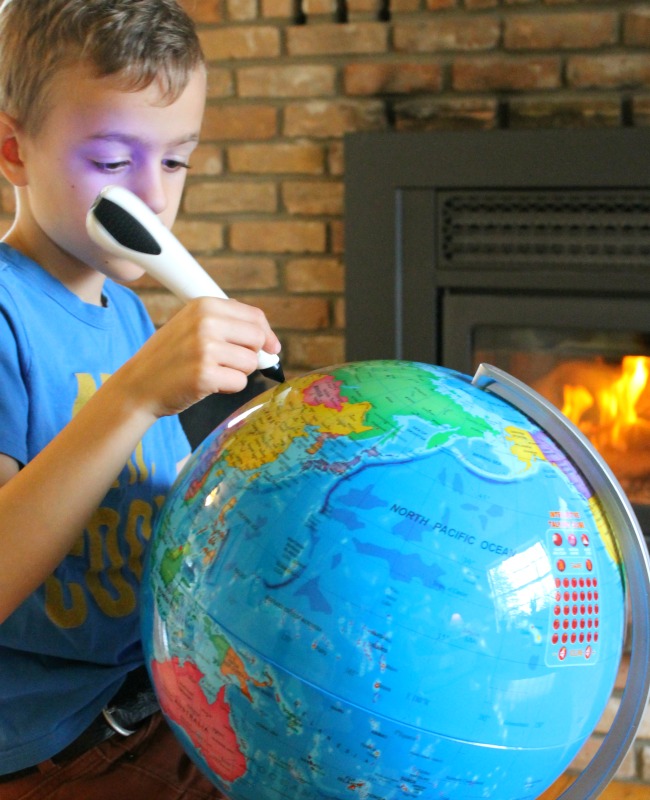 This globe is so interactive and engaging. My little guy has it on his dresser and I hear him playing with it every time he is supposed to be getting dressed or ready for bed 🙂

The globe also has a plug so it softly glows and can be used in the dark! It is such a cool feature. I haven’t shown my little guy this feature yet … since he would most certainly be up half the night listening to National Anthems.

Not that I could blame him – it is amazingly fascinating.

If you are interested in this Illuminated Interactive Globe with Talking Smart Pen by Little Experimenters, you can find it on Amazon.

But since it is our 3 Days of Giveaways, you have a chance to win it first!

To be entered to win this Interactive Globe and Talking Smart Pen simply leave a comment below.

I can’t wait to hear from you. Winners will be selected on Sunday. Be sure to come back tomorrow for the second day of our Giveaway!

Thank you so much for reading friends. I hope you and your little ones are getting into the holly, jolly spirit!

« 3 Days of Giveaways Next Week!
Bursting with Family Fun! »

This website uses cookies to improve your experience. We'll assume you're ok with this, but you can opt-out if you wish.Accept Read More
Necessary Always Enabled
4shares