Preschool math games can be so much fun!  This is a great game we use at home to help introduce the tricky concept of graphing.

Graphing likely seems simple to most adults, but to wee ones it can be very tricky!  Preschoolers often get confused with the concepts of ‘bigger/longer’ and ‘more’.  But this simple preschool math game fixes that confusion – in a fun hands-on, run and jump way!

For this game, I simply drew a big grid on the cement with chalk.  I made my grid 5 squares tall and 5 squares wide.

We went on a Nature walk and collected 5 items: Flowers, grass, sticks, pine branches, and leaves. 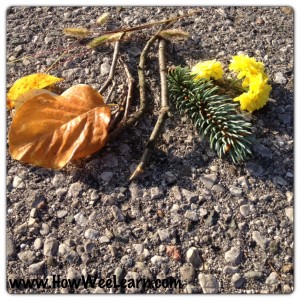 Like many wee ones, Sammy placed the flowers end to end and then the sticks end to end.  Since the sticks were longer, it looked as though there were more of them.  But, then we tried them in the chalk graph

Putting Our Nature Items into the Graph

Next, we placed our collected items into the graph.  Sammy could do this almost completely on his own – just needing the occasional reminder to start at the bottom square. 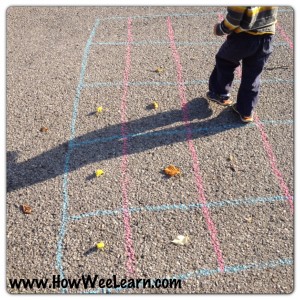 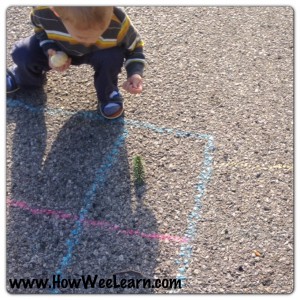 Once the nature items were in the graph, it was clearly seen which items we had the most of, and which we had the least.

Once the nature items were in the graph, we played some fun preschool math games to help solidify the learning. 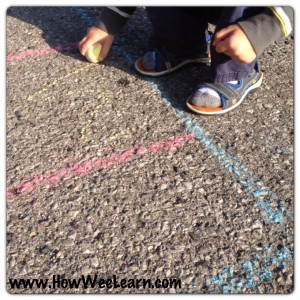 This fun math activity accomplished so many things!  We went for a great nature walk to explore and collect nature items for our graph, and then:

Best of all, Sammy loved this activity and asked that we play it again with different nature items.  I was all Preschool Math Game-d out, so decided we would save it for another day .  But he hunted around our backyard and did quite well independently!  I love that this was a fun game for him.

What are some of your favourite preschool math games?

This website uses cookies to improve your experience while you navigate through the website. Out of these, the cookies that are categorized as necessary are stored on your browser as they are essential for the working of basic functionalities of the website. We also use third-party cookies that help us analyze and understand how you use this website. These cookies will be stored in your browser only with your consent. You also have the option to opt-out of these cookies. But opting out of some of these cookies may affect your browsing experience.
Necessary Always Enabled
Necessary cookies are absolutely essential for the website to function properly. This category only includes cookies that ensures basic functionalities and security features of the website. These cookies do not store any personal information.
Non-necessary
Any cookies that may not be particularly necessary for the website to function and is used specifically to collect user personal data via analytics, ads, other embedded contents are termed as non-necessary cookies. It is mandatory to procure user consent prior to running these cookies on your website.
SAVE & ACCEPT
15 shares