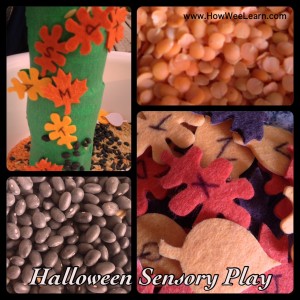 There are so many wonderful Sensory Play ideas!  For this Halloween Sensory Play activity, I combined two ideas that I love – providing Sammy and Benjamin with a Sensory Invitation to Play!  Best of all, the bin took me 2 minutes to put together and the boys have been enjoying it for days. 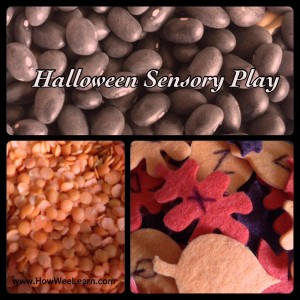 I began by making a Sensory bin with some Turtle Black Beans and Crushed Red Lentils (which are a beautiful Black and Orange) from the Bulk food store.  I used this idea after seeing the beautiful Sensory Whole Spices Play Ann created at My Nearest and Dearest.

Next, I created a Sticky Tree very, very simply by wrapping painters tape (sticky side out) around a tall plastic container.  This idea is similar to Stephanie’s Sticky Tree Invitation to Create at Two-daloo.  I added felt letters which I had written alphabet letters on.

I introduced this Sensory Play activity to Sammy with all of the items separated into bowls.  I thought he could explore each item individually, or choose to mix them. 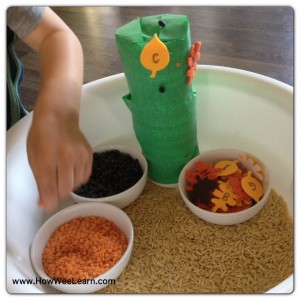 Sammy decided to mix the items almost immediately 🙂 And, at this time of the dumping, I decided we should head outside.  Sammy enjoyed feeling the beans and lentils – sinking his hands into the bowl again and again.  It was a nice quiet way for him to play after his rest.

Sammy discovered the stickiness of the tree and started adding his leaves.  He would use the big slitted spoon to hunt for ‘his letters’ (S A M) and put them up on the tree.  He added some other items to the tree as well. 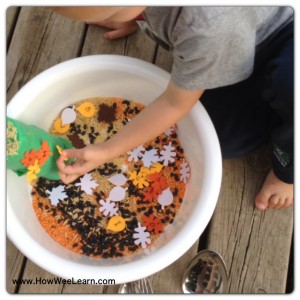 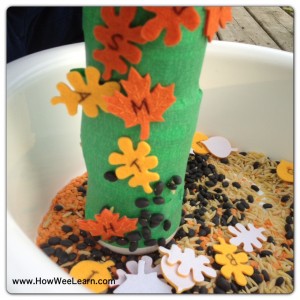 Benjamin woke up from his rest time and I decided to let him have a (very supervised) turn with this Halloween sensory play activity.  Ben just turned 1 – so he is still prone to exploring with his mouth – but I thought he may be intrigued by the spoons.  And he was, for a little while anyways! 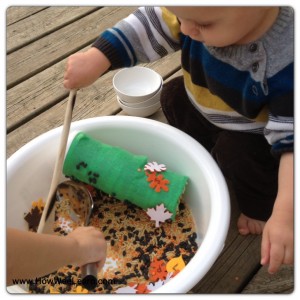 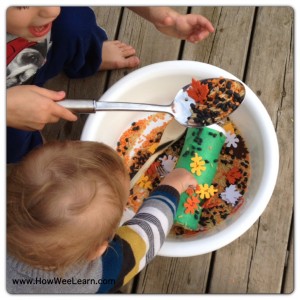 We have used this Sensory Play activity frequently over the last few days.  The sticky tree was replaced by tin cans – which the boys loved too.  Activities like theses are a great calming activity for Sammy.  A nice way for him to wake up after a rest, or settle down before one.

I will be popping this sensory play away for a week or two and then adding some spiders and little pumpkins for some really Halloween-ish fun!

Any ideas for what I could add to this Halloween Sensory Play Activity?

This website uses cookies to improve your experience while you navigate through the website. Out of these, the cookies that are categorized as necessary are stored on your browser as they are essential for the working of basic functionalities of the website. We also use third-party cookies that help us analyze and understand how you use this website. These cookies will be stored in your browser only with your consent. You also have the option to opt-out of these cookies. But opting out of some of these cookies may affect your browsing experience.
Necessary Always Enabled
Necessary cookies are absolutely essential for the website to function properly. This category only includes cookies that ensures basic functionalities and security features of the website. These cookies do not store any personal information.
Non-necessary
Any cookies that may not be particularly necessary for the website to function and is used specifically to collect user personal data via analytics, ads, other embedded contents are termed as non-necessary cookies. It is mandatory to procure user consent prior to running these cookies on your website.
SAVE & ACCEPT
41 shares