Here is a fun and simple Christmas Science experiment you can enjoy with your family.

I don’t know about you but sometimes I find it hard to come up with or find fresh ideas. Then I realized, maybe I am trying to be too elaborate with my ideas. The goal of science is for our children to ask questions; predict, design and perform an experiment; observe, and form a hypothesis. With our little ones, we guide them through this. Through my desire to keep it simple but meaningful, the idea of Race Cubes was born. 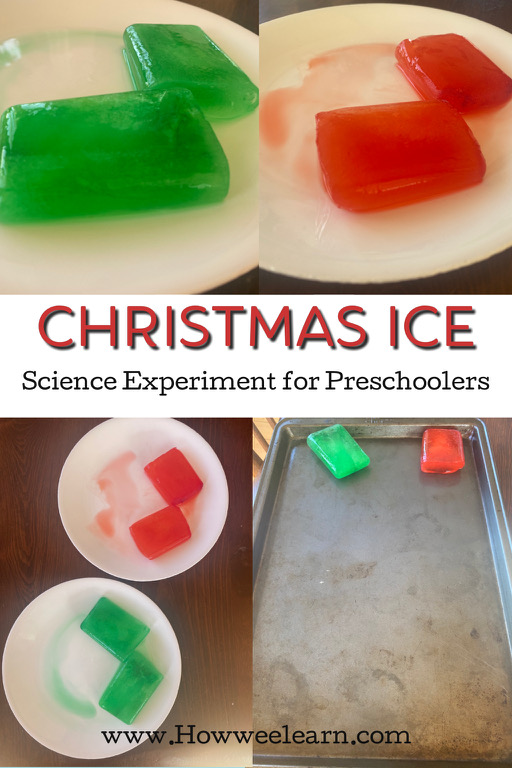 While I did this engaging Christmas science experiment with my twenty-three, 3-5 year old Kindergarten scientists, it is perfect for your little homeschooling scientists, too.

Making Use of Multiple Learning Opportunities

There are so many learning outcomes that can occur from one simple activity. Through Race Cubes, in addition to our Science goals, we were able to:

I just love blending Literacy, Math and Science. Don’t you?!

Take a photo of a red and a green ice cube together. You can do this on your computer or by printing out the photo onto a piece of paper. Next, have your child tell you some things they see. My students chose to focus on the colours they could see. 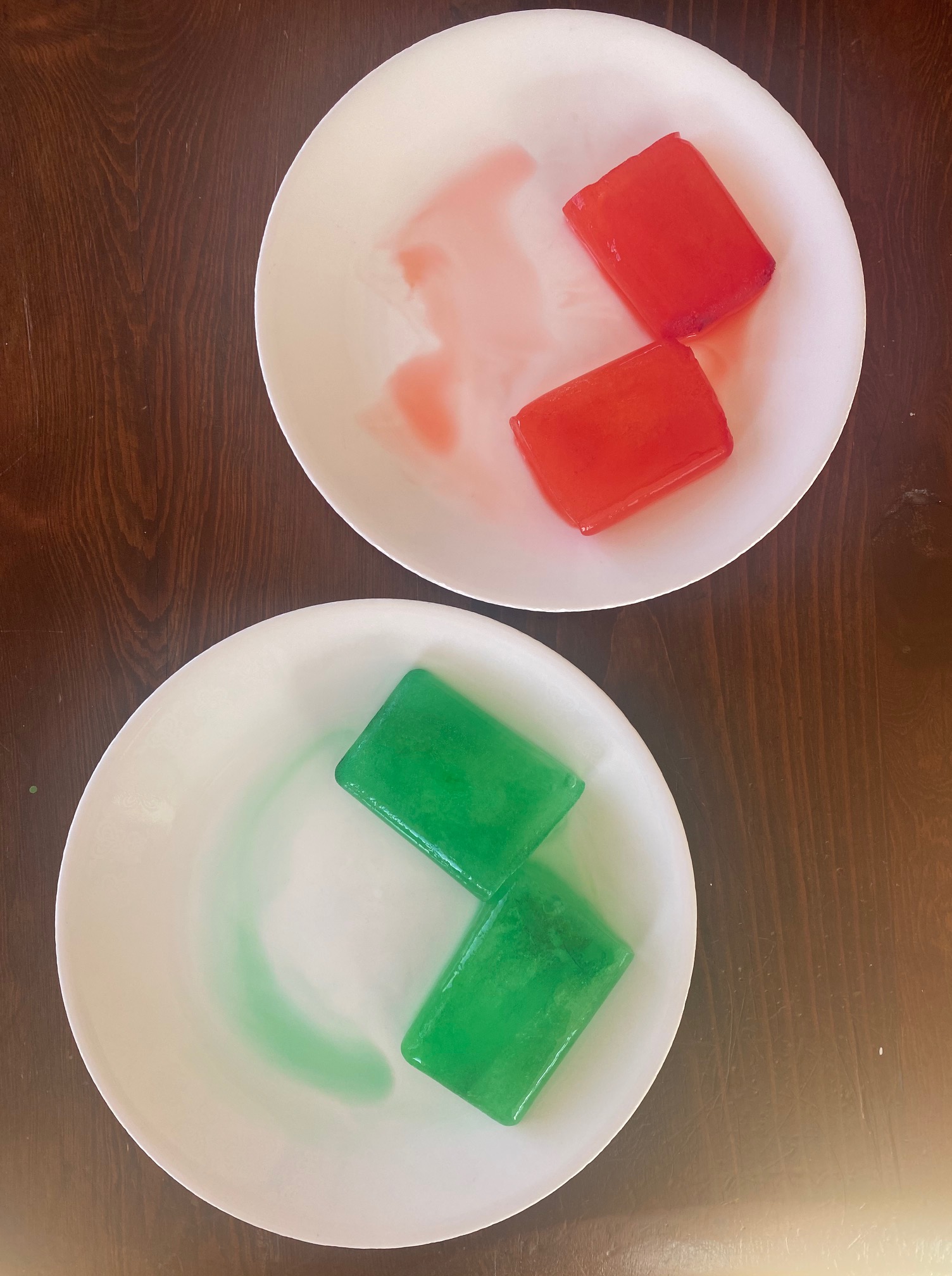 We talked about drawing a straight line to the object we are labeling. Then as I modeled the sounds we heard in the word, the children helped me come up with the letters that matched the sounds we heard. Depending on the developmental age of your child, you may do the same. You can also say a letter and have them point to it on a paper while you write it, or have them trace over it with their finger. You know your child best to know how to include them in this learning.

I explained our Christmas science experiment to the children and asked them,

“Which one do you think will win the race? Why do you think that one will win?” While we were discussing this, I held the red ice cube in my hand so it would melt a bit, and I left the green one in a cold space to prevent it from melting.
*It may be a good idea to wear medical gloves or put hand lotion on while doing the experiment to prevent hands from becoming stained from the food colouring.

Many of my students predicted the red cube would win. Their rationale was precious. For many, the reason behind their prediction was that the red ice cube will win the race because red is a faster colour than green. One of my little boys even explained to the class, “My uncle has a red race car and it is always fastest, so ya, red will win.” I just love their observations and thoughts on life! 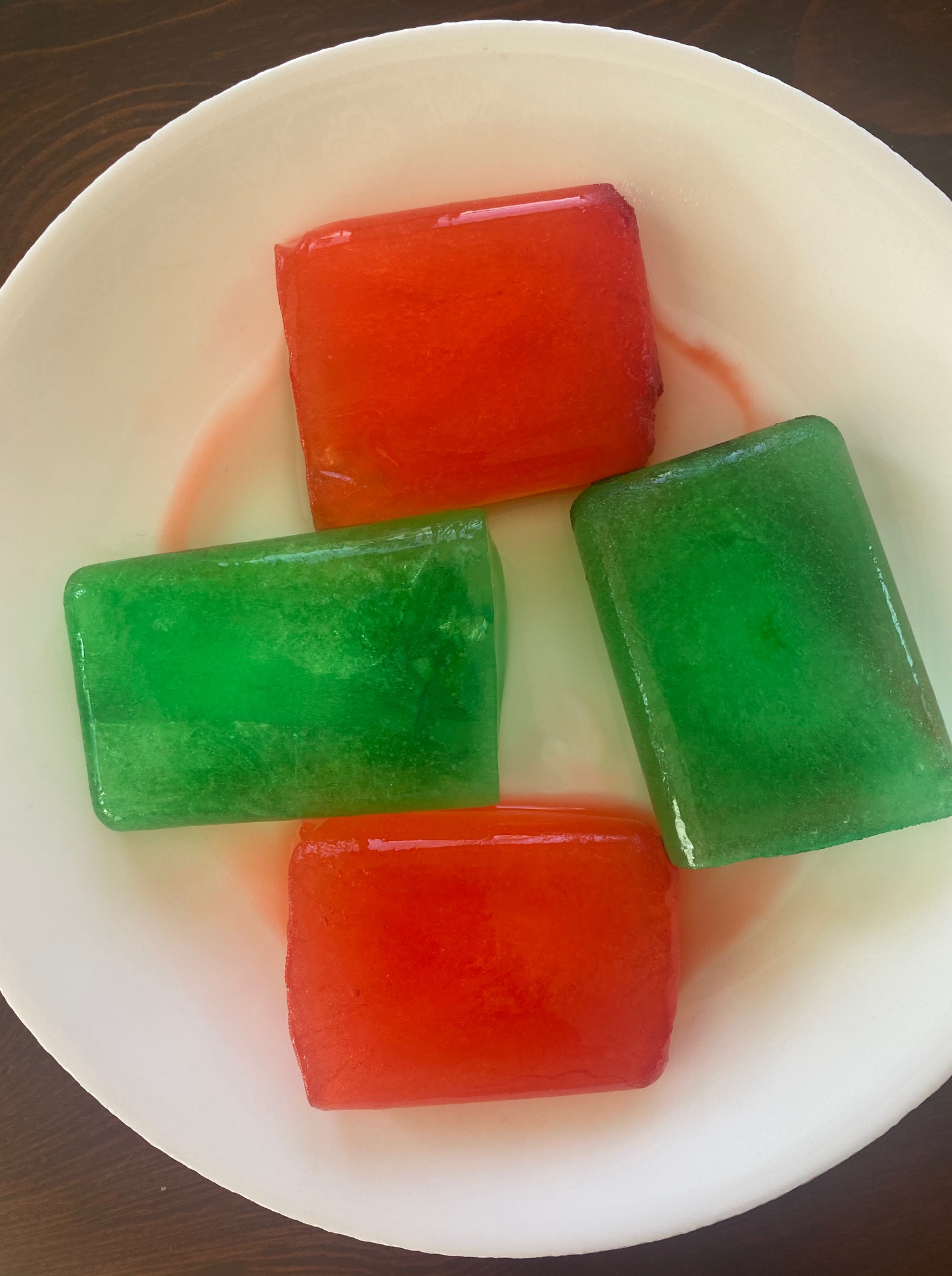 Then, one of my five year old students raised his hand and told us, “Mrs. Standish, that ice cube is dripping,” as he pointed to the red one in my hand, “so it will be slipperier than the other one. It will be faster.” Wow! I was kind of expecting them to decide based on colour, but did not expect this. Then he proceeded to tell the class how the ice on the sidewalk by his house is more slippery when it is melting and has some water on the top. Some of the other children jumped on board with his prediction.

It was time to try our Christmas science experiment to see what observations we could make.

I placed the baking sheet at an angle to make a slide and held both ice cubes at the very top of the sheet. We all cheered, “One, Two, Three, Go!” I let go of both ice cubes. The red one raced to the bottom much faster than the green one. We did it three more times with these two ice cubes and the red cube won the ice cube race each time. 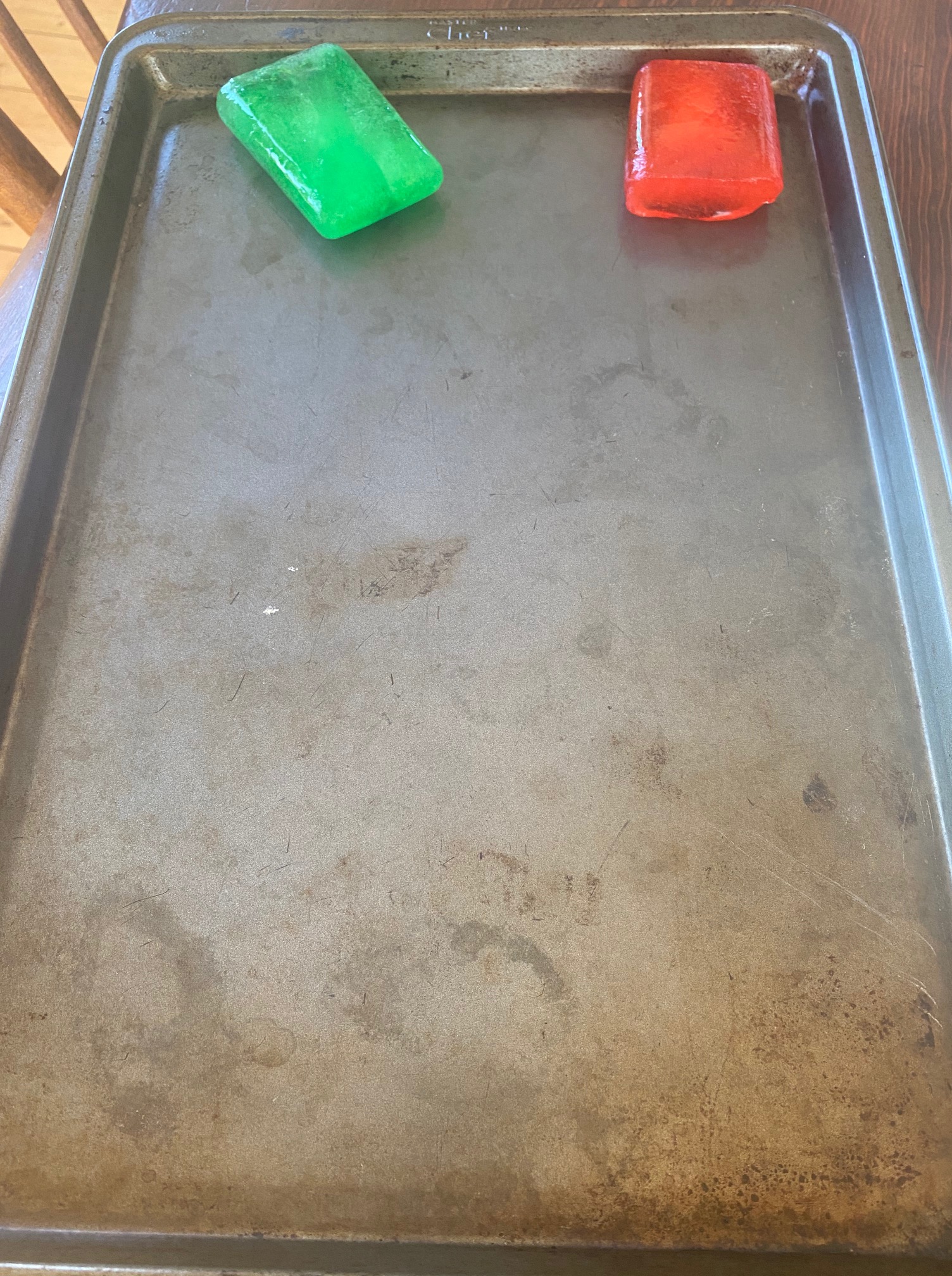 As we had been learning about tallies, we made a t-chart with green as one heading and red as the other. We used tallies to show the wins. Now, my sweet little Kinder friends were trying to decide if it won because it was red, because it was melting, or because of both.

It was time to add a twist to our experiment. As the children finished sharing their thoughts, I held a green cube in my hand while the red one stayed cold. They were quick to observe the green ice cube was now melting and the red one was cold. When I asked them which one they thought would win now, there were still a few die hard children who insisted red is a faster colour than green, while others started to rethink and lean more toward the melting theory.

Once again, we cheered, “One, Two, Three, Go!” As I let go, the green one raced to the bottom. The children cheered with excitement!  Hmmm…this had some of them really thinking. As we looked at our tally results, we realized that between all six races, both colours won the same number of times.

Talking About Our Learning

As we were discussing that red and green won the same number of races, my little friend who had the original idea of the melting ice cube being faster, was raising and shaking his hand with all intentions of ensuring he caught my attention. When it was his turn to share, he explained to the class that while both colours won the same number of races, it was always the melting cube that won. Wow! I was blown away! I just love their thinking! Little ones never cease to amaze me. Many of the other children concurred with him.

What Did We Learn From This?

From this simple experiment, key questioning on my part, and great sharing of ideas from my Kinder friends, it was decided that our key learnings from this experiment are that:

While your experiment may look different than this, and your children’s thinking may go in a different direction, your questioning can lead them to learning. Your acceptance of their ideas and encouragement to share their ideas will continue to develop wonder and questioning skills.

I hope you enjoy this Christmas science experiment with your littles as much as I did!

Belinda is a mama to two little boys and an experienced Kindergarten teacher. She has a love of using nature and technology to enhance and motivate children’s learning. She values the use and training of growth mindset at home with her family and while teaching. Follow along with her on Pinterest. 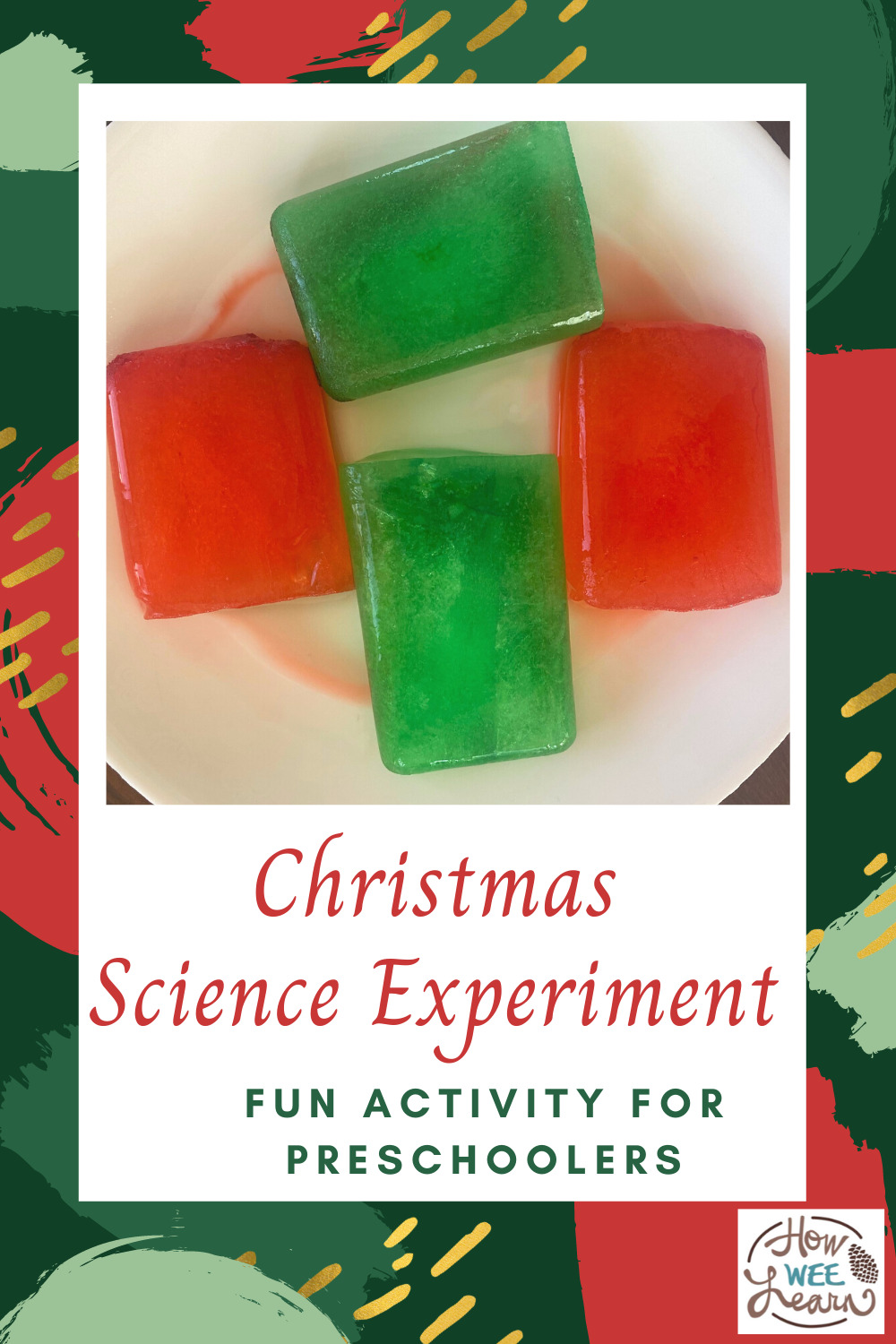 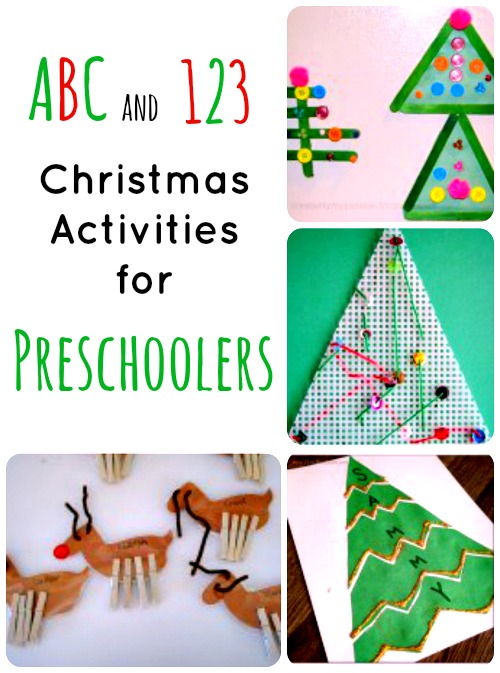 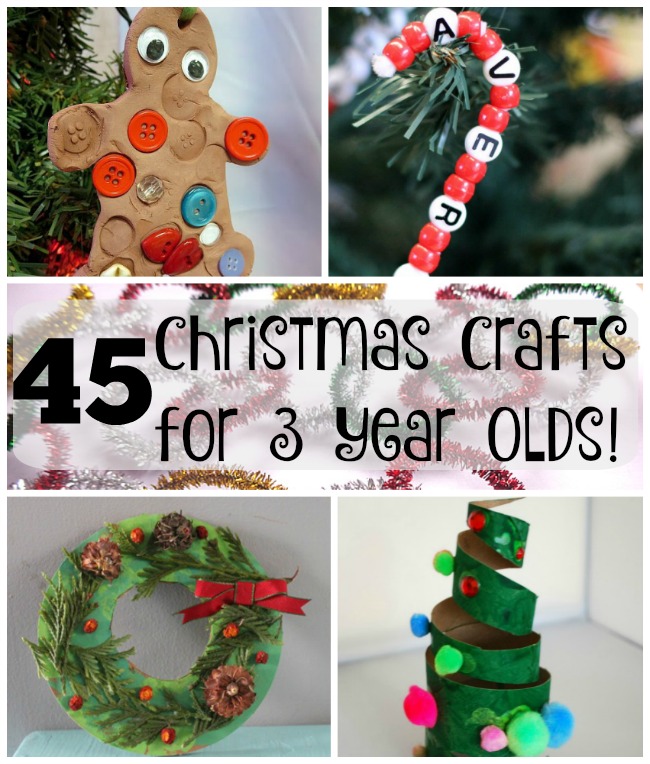 This website uses cookies to improve your experience while you navigate through the website. Out of these, the cookies that are categorized as necessary are stored on your browser as they are essential for the working of basic functionalities of the website. We also use third-party cookies that help us analyze and understand how you use this website. These cookies will be stored in your browser only with your consent. You also have the option to opt-out of these cookies. But opting out of some of these cookies may affect your browsing experience.
Necessary Always Enabled
Necessary cookies are absolutely essential for the website to function properly. This category only includes cookies that ensures basic functionalities and security features of the website. These cookies do not store any personal information.
Non-necessary
Any cookies that may not be particularly necessary for the website to function and is used specifically to collect user personal data via analytics, ads, other embedded contents are termed as non-necessary cookies. It is mandatory to procure user consent prior to running these cookies on your website.
SAVE & ACCEPT
536 shares