Sometimes I think of an activity, think it is going to be amazing, think my little guys will go nuts for it – and they don’t.  This, as it turns out, was one of those activities.

So why, you might rightfully be asking yourself, would I be sharing it with you today?  Why would I spend my time writing about it when it was a total flop?  Well, because I still think it has the potential to be a great activity.  Just not on this particular day. 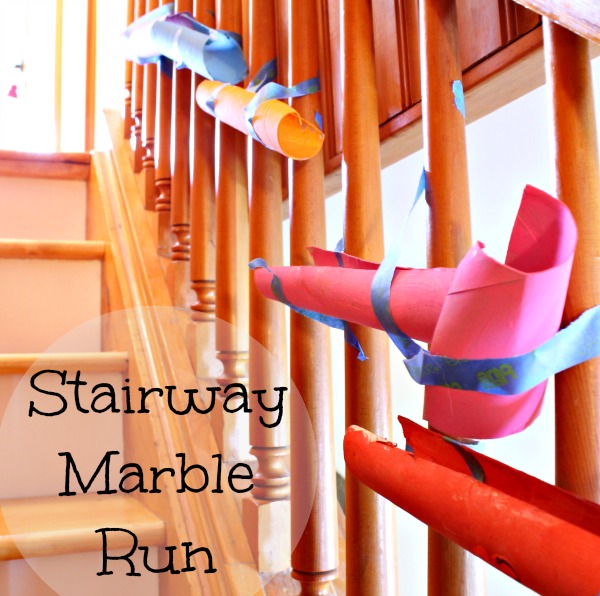 On this particular day my little ones (aged 2 and 4) were very much into a game of ‘fisherman’.  It’s a rather bizarre game the two of them have created, and play very frequently.  The game: they gather all of the books (fish) from Sammy’s room, load them on to their boat (blanket), cart them into their kitchen (actually the kitchen), and cook them.

I had thought they might like a different activity.  Truthfully, I thought this marble run activity would be a bit more learning filled.  Working on some visual spatial skills, sequential reasoning, and planning.

I still find myself doing this, though I try so hard to be aware of it.  I really need to remember that their imaginative play, their unstructured time, is sacred.

Now I know.  You don’t interrupt fishermen.  The whole time we were doing this activity I was told that their fish might be getting away.  I believe it lasted a total of 5 minutes.

But we still have it up on our staircase.  Held with painters tape just waiting for little ones to take notice. 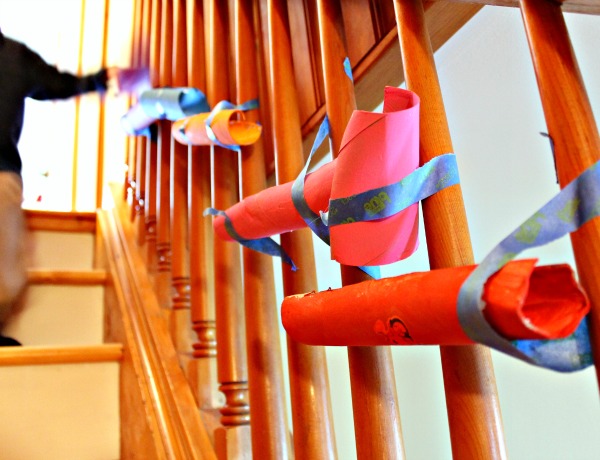 And they will.  I am very sure of it.  One day soon it will catch their eyes and they will play with this marble run.

Until then, perhaps your little ones would be interested?

The idea is incredibly simple.  We simply took some paper towel tubes and toilet paper tubes, cut them down the middle lengthwise and painted them (only because my Ben loves to paint right now).

Then we used painters tape to attach them to the spindles of our staircase.

The boys made just one creation, though plenty more are simply waiting to be created.

When the marble took it’s first run I thought I had them hooked.  It was really cool!  But didn’t that marble roll all the way down to their ‘boat’ …

Finally I surrendered, casted them both out to sea, and took some pictures.  At least it gave me some time to play with the manual mode on my camera!  Man that’s tricky.

I hope your little ones enjoy this idea.  And if not, suggest they fish for books.

Please consider joining our over 200 000 Pinterest followers, and liking us on Facebook so we can share more learning activities with you and your little ones!  Thank you.

This website uses cookies to improve your experience while you navigate through the website. Out of these, the cookies that are categorized as necessary are stored on your browser as they are essential for the working of basic functionalities of the website. We also use third-party cookies that help us analyze and understand how you use this website. These cookies will be stored in your browser only with your consent. You also have the option to opt-out of these cookies. But opting out of some of these cookies may affect your browsing experience.
Necessary Always Enabled
Necessary cookies are absolutely essential for the website to function properly. This category only includes cookies that ensures basic functionalities and security features of the website. These cookies do not store any personal information.
Non-necessary
Any cookies that may not be particularly necessary for the website to function and is used specifically to collect user personal data via analytics, ads, other embedded contents are termed as non-necessary cookies. It is mandatory to procure user consent prior to running these cookies on your website.
SAVE & ACCEPT
152 shares