I had thought of this idea for a neat sensory activity for my kids quite awhile ago.  But in my mind I knew it would be messy, which is why I think I waited so long to give it a go.  But the mess really wasn’t that bad at all … and it was TOTALLY worth it!

This slippery sledding sensory bin was a blast for my boys, and full of learning too. 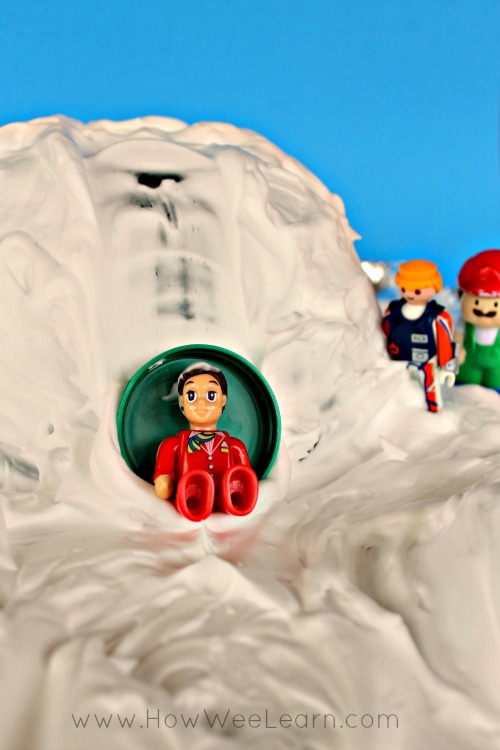 My Sam is a bit particular about getting his hands messy.  In order for him to really take part in any sensory activities the activities have to be very engaging.  And this one – with the slipping and the sledding and the face-plants from the top of the snow hill?  Well, it certainly got his attention.

The neatest thing about this sensory bin is that the sleds really do slide down the hill.  I have to say watching those little people in the little sleds slowly slide all the way down the hill was rather amusing …. um – for the boys of course. 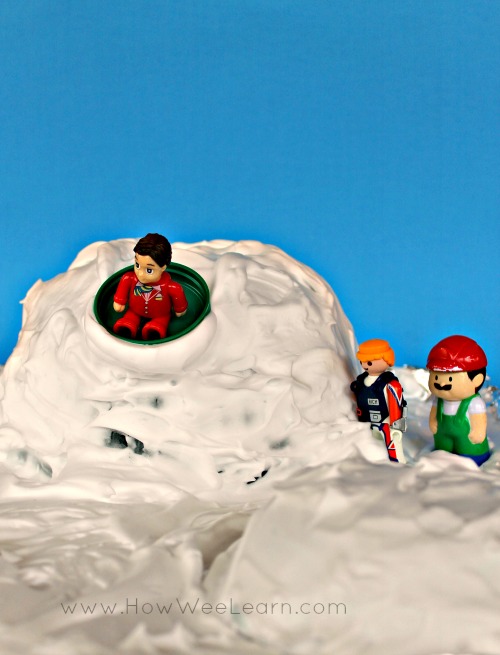 Creating this bin was super easy.  I began by taking a big cookie sheet and covering it with tin foil.

Next I found two round glass bowls, one big and one small, and placed them upside down on the cookie sheet.

After I covered everything with shaving cream.

Finally I gathered up a few little plastic people that looked as though they might like to go sledding. 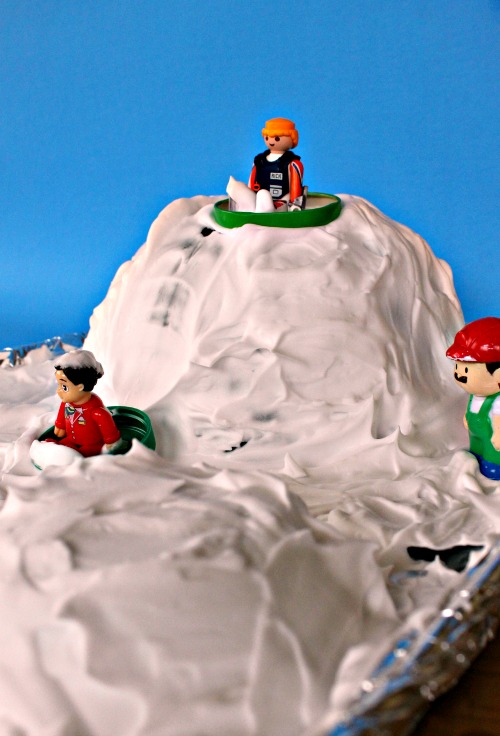 This was also why I chose two different sized bowls.

I wanted my little ones to have a chance to play with the effect weight, size, and texture has on sliding down big and small hills.

Like most things we do, I didn’t go into too much detail with my boys explaining the details of their learning.  They are very young.  I began by letting them simply play.  Though, of course, their play was anything but simple.  They were experimenting and exploring all on their own.

After awhile I suggested the little people had a race.  Sam, my 4 year old, of course chose the fastest sled with the heaviest person.  He generously offered his 2 year old brother Ben the slower sled with the lightest person – since that person was Ben’s “favourite”.  Right.  My competitive boy.

Throughout their play they also discovered that the little people would slide down the hill faster if there was already a track to follow.  And that they went down the steep hill much faster than the gently sloping one, even though it was much longer.

They also discovered that they could make the little people do face plants into the ‘snow’ from the top of the hill.  You know, all your typical, important scientific discoveries. 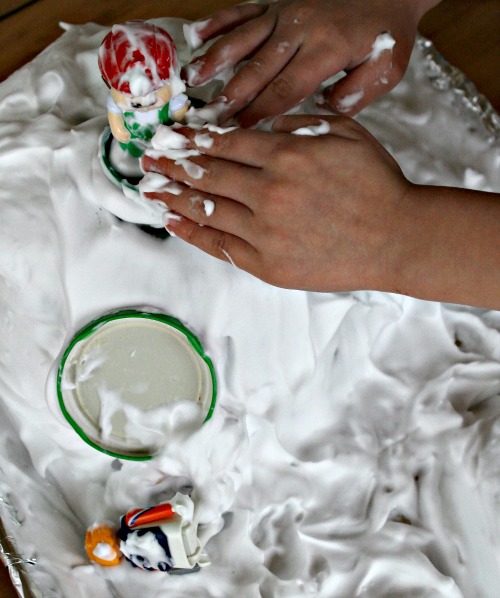 I love that this sensory activity had my Sam diving right into the messy play (with a towel close by, of course).  And the clean up was actually a breeze – we just wiped up any dropped shaving cream with a towel.

Loads of fun, tons of learning, and plenty of face plants.  A good day.

This website uses cookies to improve your experience while you navigate through the website. Out of these, the cookies that are categorized as necessary are stored on your browser as they are essential for the working of basic functionalities of the website. We also use third-party cookies that help us analyze and understand how you use this website. These cookies will be stored in your browser only with your consent. You also have the option to opt-out of these cookies. But opting out of some of these cookies may affect your browsing experience.
Necessary Always Enabled
Necessary cookies are absolutely essential for the website to function properly. This category only includes cookies that ensures basic functionalities and security features of the website. These cookies do not store any personal information.
Non-necessary
Any cookies that may not be particularly necessary for the website to function and is used specifically to collect user personal data via analytics, ads, other embedded contents are termed as non-necessary cookies. It is mandatory to procure user consent prior to running these cookies on your website.
SAVE & ACCEPT
221 shares