We were hesitant to purchase a trampoline. My boys are rather rowdy, and one little one tends to be a bit accident prone, making me think twice about a trampoline. Or three times. Even four.

By the fifth thought, and a lot of convincing and promises of safety, we found ourselves owning a trampoline. The kids were thrilled!

And then it blew away in a bad storm and was destroyed. This incident required some sixth, seventh, and eighth thoughts …

But THEN, we got another one! And anchored it down much better. I do believe, this time, it is here to stay.

It is certainly getting some good use too. The kids love playing a ton of different fun trampoline games with it.

Here are 8 awesomely fun trampoline games for kids to try this summer:

1. Chalk games. Use some chalk to draw squiggly lines to follow, letters to match, numbers to jump, a hop scotch, an obstacle course … anything!

2. Popcorn. This one is a daily occurrence around here. Someone sits in the middle of the trampoline with his knees tucked into his chest and his arms wrapped around his knees. The other person jumps, trying to “pop” the popcorn. The popcorn person has popped when he is no longer upright.

3. Cow. One person is in the middle of the trampoline on his hands and knees with his eyes closed. They have to crawl around and try to touch the other people on the trampoline. When the cow touches someone, they trade places. (As I write this I realize that I have NO idea why this game is called “cow”)

4. Rock, Paper, Scissors, trampoline style. The classic game but using your whole body on the trampoline. Rock is landing on your hands and knees, paper is landing flat, and scissors is landing as a seat drop. 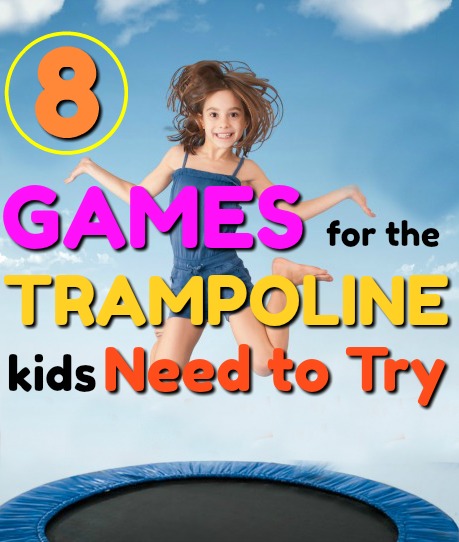 6. 1-2-3. This is a fun game that my 12 year old loves. One person jumps 3 times and the other person counts out loud (1-2-3) as they jump. Once “3” has been called, and the jumper is on the way down to land, a movement is quickly called out. “Knees!” or “Seat!” or anything at all. The jumper has to try to land in that correct position.

7. Balloons on the trampoline. This one is so much fun for kids, and great for a birthday party too.

There you have it! 8 awesomely fun trampoline games for little ones to enjoy this summer. Assuming, of course, you have anchored your trampoline down correctly …

This website uses cookies to improve your experience while you navigate through the website. Out of these, the cookies that are categorized as necessary are stored on your browser as they are essential for the working of basic functionalities of the website. We also use third-party cookies that help us analyze and understand how you use this website. These cookies will be stored in your browser only with your consent. You also have the option to opt-out of these cookies. But opting out of some of these cookies may affect your browsing experience.
Necessary Always Enabled
Necessary cookies are absolutely essential for the website to function properly. This category only includes cookies that ensures basic functionalities and security features of the website. These cookies do not store any personal information.
Non-necessary
Any cookies that may not be particularly necessary for the website to function and is used specifically to collect user personal data via analytics, ads, other embedded contents are termed as non-necessary cookies. It is mandatory to procure user consent prior to running these cookies on your website.
SAVE & ACCEPT
899 shares