Sammy is very interested in letters and ‘spelling’ right now.  He loves to ask how to spell words, point out letters he knows everywhere he goes, and generally all alphabet activities for preschoolers.

He would also very much love to print these letters.  However, he is simply not quite ready for writing.  He is 3 and has really not had much interest in fine motor activities.  So he has trouble holding a pencil or crayon and trouble making controlled marks – and it was starting to frustrate him.  A lot.

Luckily there are so many different alphabet activities for preschoolers and so many ways to ‘write’ letters.  Many do not involve holding a pencil at all! 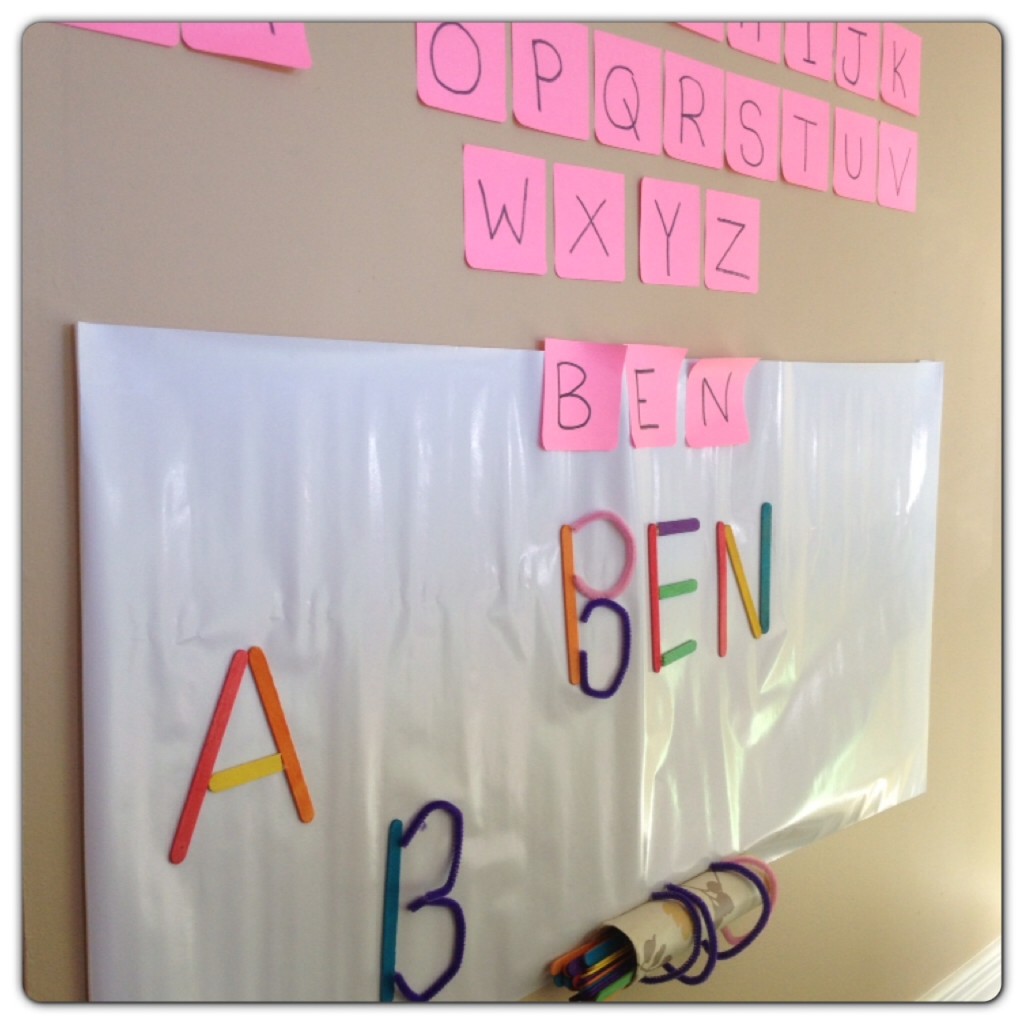 Sometimes we use play dough, or a bingo dabber, or beans.  But lately we have been building letters on a ‘Sticky Wall’ – and it has been a huge hit.

I first got the idea of a sticky wall from Two-daloo and their Halloween Frankenstein.  Since then, I have seen sticky walls everywhere on the internet!  One that I love is this Itsy Bitsy Spider sticky wall by Fantastic Fun and Learning – what a wonderful way to retell a story!

Anyways, long story short (well, I guess it wasn’t that short) we made a sticky wall.

We created the sticky wall by simply using Dollar store contact paper – sticky side out.  At first I fixed it to the wall by rolling the sticky edge underneath and pressing to the wall. But after a bit of play – the pushing and pulling on and off of popsicle sticks – we added some painters tape around the sides to give it added strength.

Alphabet Activities for Preschoolers on a Sticky Wall:

I wrote the letters of the alphabet on sticky notes (one letter per sticky) and stuck them above the board (within arms reach for Sammy).  I wanted the letters to be moveable so I could spell a word for Sam, should he ask me to, and he could build it.

These sticky letters are great for so many alphabet activities for preschoolers – we re-use them again and again. 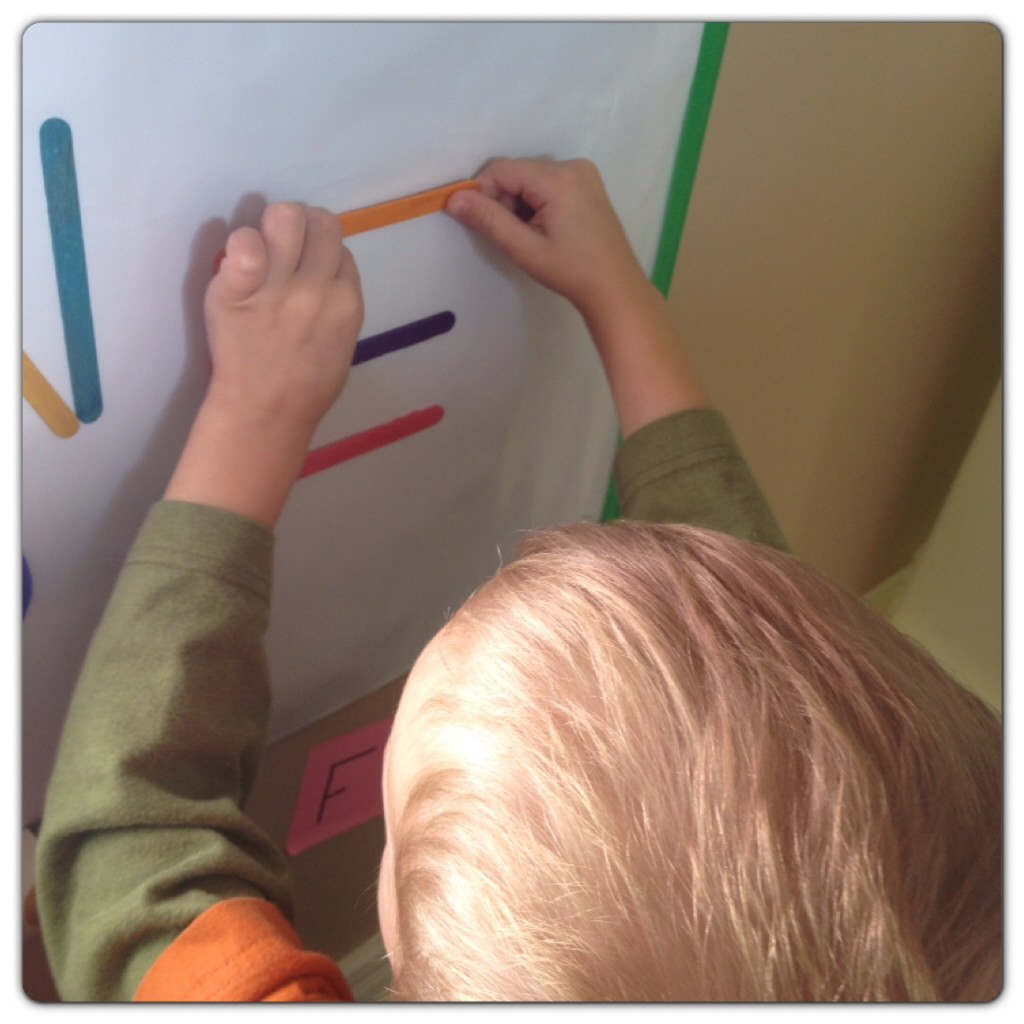 The tools we used for building the letters were craft sticks and pipe cleaners.  I chose two different materials because I wanted Sammy to really think about how he was building each letter – was the letter made of curved parts, straight parts, or both?

The straight parts were easiest made with the craft sticks (either big or broken in half) and the curved parts were best made by pipe cleaners (which I had already bent).

Sammy has been loving building his letters.  He is so very proud of himself every time he makes a letter or word.  He has even started playing with sounds — saying Ben’s name and recognizing that it starts with the sound ‘B’ so he searches for the letter B before asking me to help him with the rest of Ben’s name. 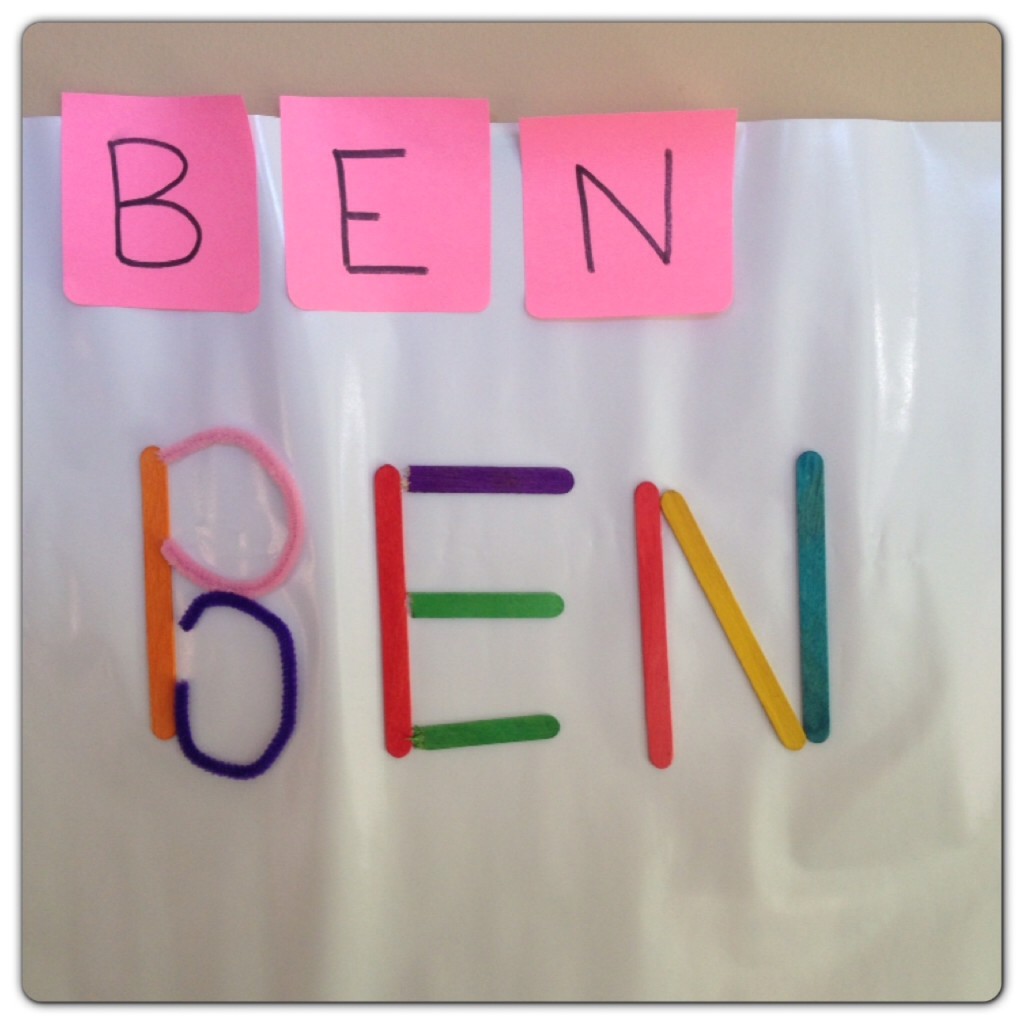 Since this board was such a hit and I knew it would be hanging around awhile, we made a little storage area for all of the craft sticks and pipe cleaners.

I simply took a paper towel tube (covered it with a flowered contact paper only because I had it handy and thought it would look nice) and stuck it to the bottom of the sticky paper.  The craft sticks fit nicely inside (long sticks on one side and halves on the other) and the pipe cleaners wrapped around the outside of the roll nicely.

Neat and tidy and ready for play anytime! 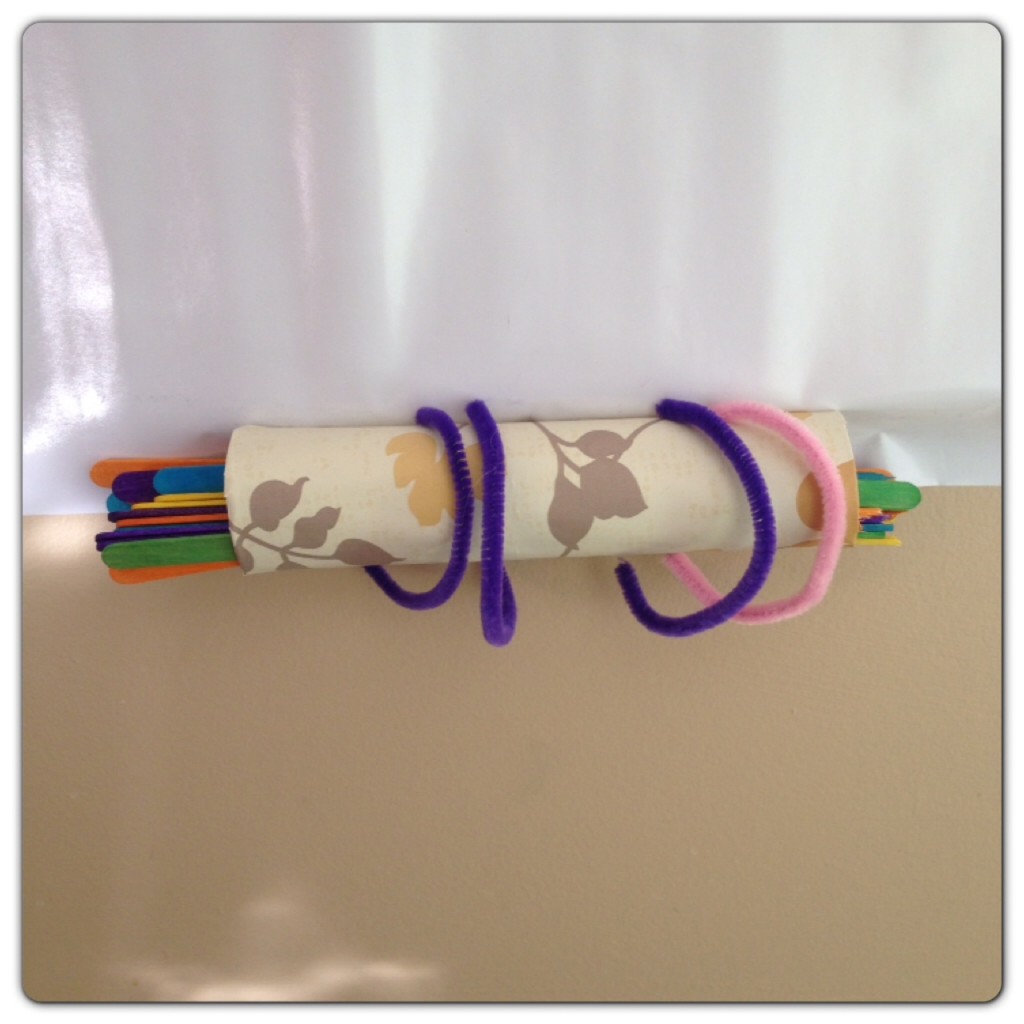 There are so many ways to learn letters before a pencil grip is needed.  I believe in following my wee ones leads.  If they are interested in learning about something I try hard to make it appropriate for what they are capable of – a challenge, but not a frustration.

Funny side note – Benjamin (12 months) bent over by the sticky wall and his head touched, sticking his hair gently to the wall.  It must have felt funny because he did it again and again.  Madeline and I started laughing – so now of course he does it all the time, with a big smile waiting for a reaction.  Oh the fun to be had with a sticky wall!

Please consider Liking us on Facebook so we can share more creative learning activities with you and your wee ones! Thank you!

« A Photo on Friday: Apple Boat
Move and Learn to Pattern »

This website uses cookies to improve your experience while you navigate through the website. Out of these, the cookies that are categorized as necessary are stored on your browser as they are essential for the working of basic functionalities of the website. We also use third-party cookies that help us analyze and understand how you use this website. These cookies will be stored in your browser only with your consent. You also have the option to opt-out of these cookies. But opting out of some of these cookies may affect your browsing experience.
Necessary Always Enabled
Necessary cookies are absolutely essential for the website to function properly. This category only includes cookies that ensures basic functionalities and security features of the website. These cookies do not store any personal information.
Non-necessary
Any cookies that may not be particularly necessary for the website to function and is used specifically to collect user personal data via analytics, ads, other embedded contents are termed as non-necessary cookies. It is mandatory to procure user consent prior to running these cookies on your website.
SAVE & ACCEPT
478 shares