Mixing some season fun into learning the alphabet is a great way to make learning meaningful to wee ones.  This Christmas alphabet game is super simple – and could easily be changed to fit any theme, season, or learning activity! 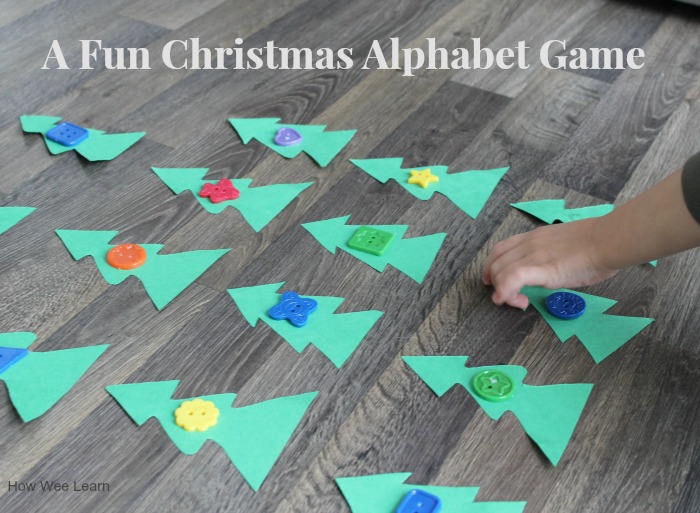 To prepare this Christmas alphabet game I cut some Christmas trees out of green construction paper.  I chose some alphabet letters Sammy finds a bit tricky to recognize and wrote each letter on 2 Christmas trees.  When teaching Sammy his alphabet I started with letters that were meaningful to him – his name.  From there, we progressed into other family members names and sight words he wanted to learn.  Now we are left with about 6 or 7 letters that he still has trouble with. 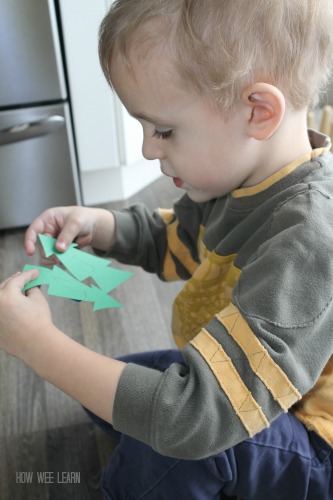 We then glued a different button to the back of each tree.  I like making each card look slightly different when playing memory games with kids.  Remembering things using only visual-spatial skills (like typical memory games) is super tricky for preschoolers.  By adding in a visual reminder (“The letter J has a yellow button”) it helps them make that memory connection a bit easier.

Sammy actually played this matching game all on his self many times before we played together.  Truthfully, he preferred playing it solo.

To play this Christmas alphabet game he would flip over one card to reveal the letter.  Then he would flip over another card to see if it matched.  If not, he would turn them both over and start again.  It was cute to see him follow his own rule and make sure both cards were turned down before choosing his next card.  And the excitement!  My goodness, when a match was found it was quite the celebration! 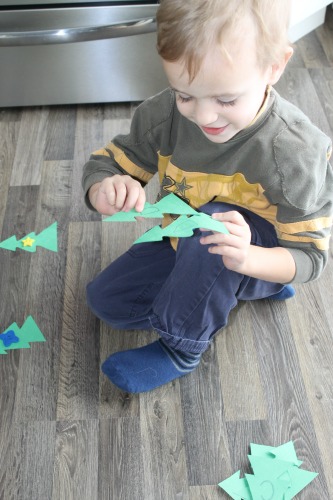 We played with just capital alphabet letters.  But matching uppercase and lowercase letters would be another great activity for wee ones.  You could also match sight words, or numbers.  Addition and subtraction could be done by matching cards with the math problem on one and the answer on the other.

Please consider liking us on Facebook so we can share more creative learning activities with you and your wee ones!

This website uses cookies to improve your experience while you navigate through the website. Out of these, the cookies that are categorized as necessary are stored on your browser as they are essential for the working of basic functionalities of the website. We also use third-party cookies that help us analyze and understand how you use this website. These cookies will be stored in your browser only with your consent. You also have the option to opt-out of these cookies. But opting out of some of these cookies may affect your browsing experience.
Necessary Always Enabled
Necessary cookies are absolutely essential for the website to function properly. This category only includes cookies that ensures basic functionalities and security features of the website. These cookies do not store any personal information.
Non-necessary
Any cookies that may not be particularly necessary for the website to function and is used specifically to collect user personal data via analytics, ads, other embedded contents are termed as non-necessary cookies. It is mandatory to procure user consent prior to running these cookies on your website.
SAVE & ACCEPT
49 shares