I have been wondering for a little while what to do with my older posts. Since I have been doing this for quite some time now, some of my old posts feel a bit awkward to me.

I sort of feel like I was in that awkward teenage phase where I was trying to impress the cool kids (like Google and Yahoo) instead of focusing on why I was really doing what I was doing – to connect with you! Like-minded Mamas and teachers, looking for an idea or two for the little ones in their lives.

But here is the quandary. (See, now that I am not trying to impress the cool kids I use words like ‘quandary’). I like the ideas in those old posts. And I think you will too. This post is more than two years old, and many of you were not here two years ago, so I bet it is new to you. So I want to share it with you. 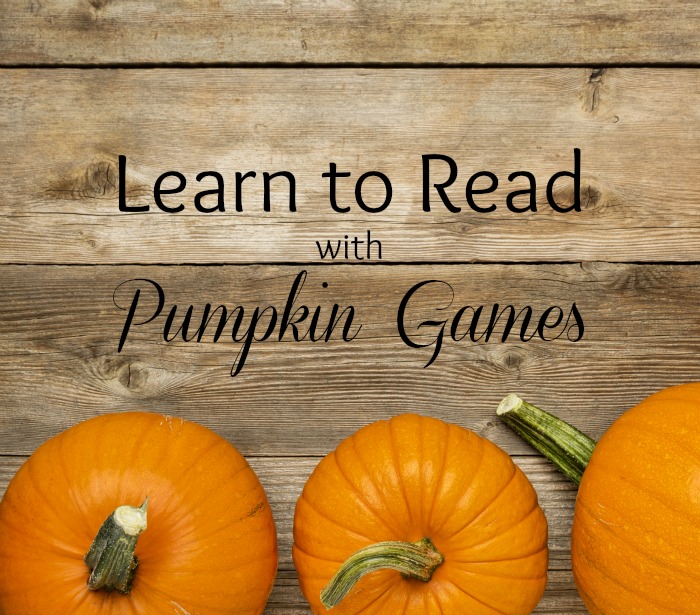 So here is an old, old post. A really old one, with blurry pictures and unnecessary bolding. But I hope you can look past it. I bet you will love these sight words on the pumpkin patch! Here you go: 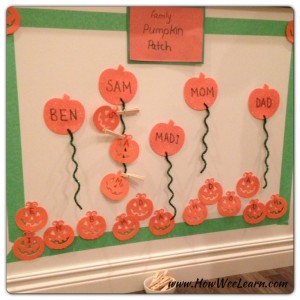 I wrote a family members name on the big pumpkin,

and wrote each letter of that name on little pumpkins.

For these fall sight word games they were attached with clothespins: 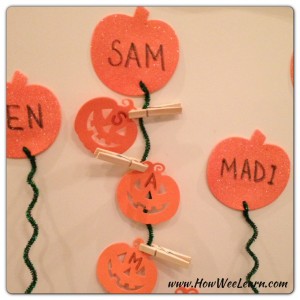 The two sight word games are very similar.  We started with the first version: all the letter pumpkins were on the pumpkin patch: 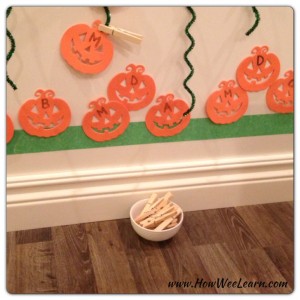 The game was to find the letters for each family members name (using the big pumpkin as a guide) and pin them up with clothespins to the big pumpkins vine:

Sammy really enjoyed this version of the game – as he really loves clothespins right now!

During Sammy’s rest time I hid the little letter pumpkins.  When he got up and discovered they were gone – I said, ‘We better call the Farmer to get them all back to the pumpkin patch!’ Well … he had that plaid shirt on in about 2 seconds (amazing how quickly he can dress himself when he wants too!)

This version of the game was a bit more complicated.  Sammy had to first find the runaway pumpkin letter and then match it to one of the big pumpkins.  There happen to be a lot of ‘M’s in our family, so he would get stumped by pinning 2 (or 3) letter ‘M’s to his name.  It actually turned out to be a great lesson in matching. 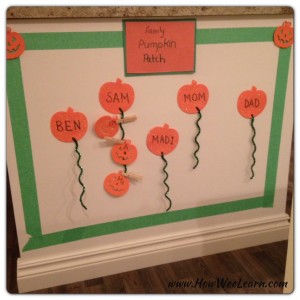 My Sammy loved both of these sight word games.  And they can truly be extended to almost every learning activity!  You could match upper and lowercase letters, find missing letters to words, match opposite words, match rhyming words … and that is just language activities!  You could easily use this game format for numbers or shapes as well.

My experience in the Kindergarten classroom has led me to believe that letters must be meaningful to wee ones.  And the most meaningful letters are the ones that are in meaningful words to those wee ones.  Their name, and family members names are excellent places to start.

Well there you have it! An oldie but a goodie, right? Thanks for reading friends, hope you are having a lovely week.

This website uses cookies to improve your experience while you navigate through the website. Out of these, the cookies that are categorized as necessary are stored on your browser as they are essential for the working of basic functionalities of the website. We also use third-party cookies that help us analyze and understand how you use this website. These cookies will be stored in your browser only with your consent. You also have the option to opt-out of these cookies. But opting out of some of these cookies may affect your browsing experience.
Necessary Always Enabled
Necessary cookies are absolutely essential for the website to function properly. This category only includes cookies that ensures basic functionalities and security features of the website. These cookies do not store any personal information.
Non-necessary
Any cookies that may not be particularly necessary for the website to function and is used specifically to collect user personal data via analytics, ads, other embedded contents are termed as non-necessary cookies. It is mandatory to procure user consent prior to running these cookies on your website.
SAVE & ACCEPT
73 shares