I started this nature series of exploring the 5 senses in late fall.  I thought of the series and was excited to start it with my wee ones, so we did!  However, in fall we tend to get some snow where we live.  And as it is right now, most everything is frozen.  Not the best of time to explore our sense of smell. 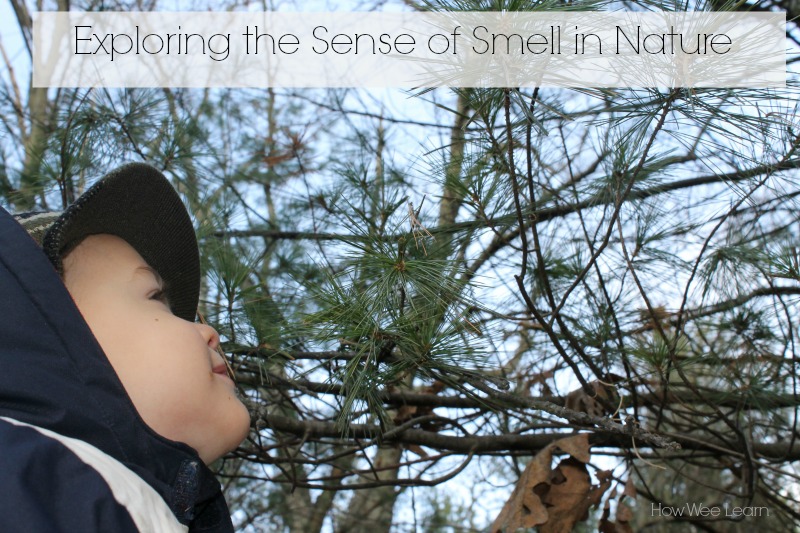 In the spring and summer there would be oodles to smell naturally.  But now?  Well … everything sort of smells … cold.  So we had to get creative!  We decided to explore our sense of smell through a scavenger hunt sort of game.  And it was fun!

This time, for our nature walk, I brought with us some cinnamon.  McCormick ground cinnamon – there is nothing better! The game was simple (which is the very best kind of game on a chilly day outside with wee ones).  Follow your nose, and some clues, to find the sprinkled pile of cinnamon.

After giving the cinnamon a few sniffs to be sure my wee ones would recognize the scent we got to the game.  I just let my little ones smell the cinnamon, but you could also teach them how to properly smell something (by wafting it with their hand towards their nose) – a good practice for budding chemists!

I was the hider of the cinnamon first of all.  I sprinkled some on a tree that had been cut.  I brought my wee ones to the little clearing and had them begin their smelling-hunt.  It didn’t take very long before Madeline stumbled upon the cinnamon.  After confirming with Sam that it was the right scent they decided on the next hider. 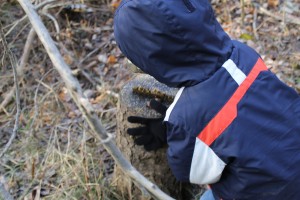 Madeline hid the cinnamon – and in true big sister fashion – hid it very well.  In fact, it was hidden so well that wee noses could not even reach it!  After a few clues (and some lifting) the cinnamon had been found once again! 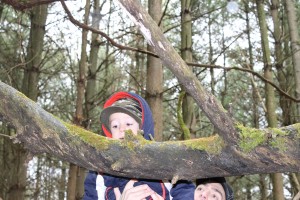 As we were searching (and searching) for the cinnamon that Madeline found, Sammy discovered a strong scent that he recognized.  Last week, you may recall, we made pine needle tea.  As Sammy was sniffing his way around the woods he found some pine needles and remarked that it smelled like our ‘Christmas tree tea’!  So there you go – there are natural scents to be found in the forest even in winter time!

It was interesting talking with my kids as we explored.  We were talking about how things smelled – and it was interesting to hear some of the language they used.  Some things smelled ‘wet’ or ‘damp’ – which is interesting, because these words to me represented more of a touching language – not so much words that describe scent – to me anyways.  But as I was also smelling I could appreciate the use of the words they chose — some things really did smell wet! 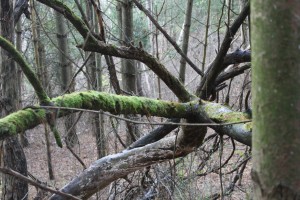 I am really enjoying exploring the 5 senses with my wee ones in nature.  It is a lovely way to slow down and really appreciate all that is around us.  It is also a neat way to remember all of the different ways to explore and learn about something – there is so much more that can be learned about an object when we use all of our senses to explore it.

Please consider liking us on Facebook so we can share more creative learning activities with you and your wee ones!

This website uses cookies to improve your experience while you navigate through the website. Out of these, the cookies that are categorized as necessary are stored on your browser as they are essential for the working of basic functionalities of the website. We also use third-party cookies that help us analyze and understand how you use this website. These cookies will be stored in your browser only with your consent. You also have the option to opt-out of these cookies. But opting out of some of these cookies may affect your browsing experience.
Necessary Always Enabled
Necessary cookies are absolutely essential for the website to function properly. This category only includes cookies that ensures basic functionalities and security features of the website. These cookies do not store any personal information.
Non-necessary
Any cookies that may not be particularly necessary for the website to function and is used specifically to collect user personal data via analytics, ads, other embedded contents are termed as non-necessary cookies. It is mandatory to procure user consent prior to running these cookies on your website.
SAVE & ACCEPT
36 shares