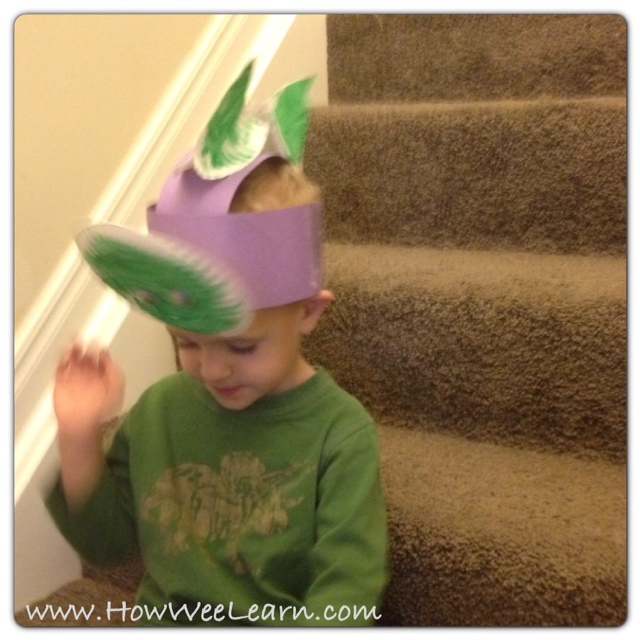 To make this Bobbling Dinosaur Hat all you need is:

To begin this craft, I cut out some shapes from paper plates.  I cut: 4 triangles (for the spikes on the spine), 2 crescent moon shapes (for the tail), and left one plate whole (for the face).  Then Sammy painted them all green. He also added Googly eyes to the Dinosaurs face – but decided he didn’t want him to have a mouth or nose 🙂 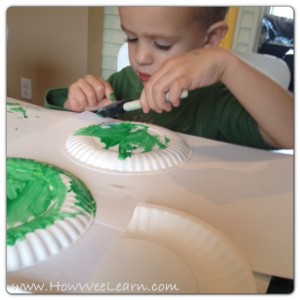 I cut a piece of construction paper into three strips.  I measured Sammy’s head, and attached two of the strips together to form the ‘hat’ or headband.  The third strip I taped from the front of the headband to the back (this is where the spikes will go).

Next I made, what we call, a “Fancy Accordion Fold” for the Dinosaurs neck.  It looks tricky – but it is very simple.  Cut two strips of construction paper.  Tape the corners so it looks like the letter ‘L’.  Then simply fold.  Side one down, side two over.  Side one up, side two over.  Repeat.  At the end secure with tape. Like this: 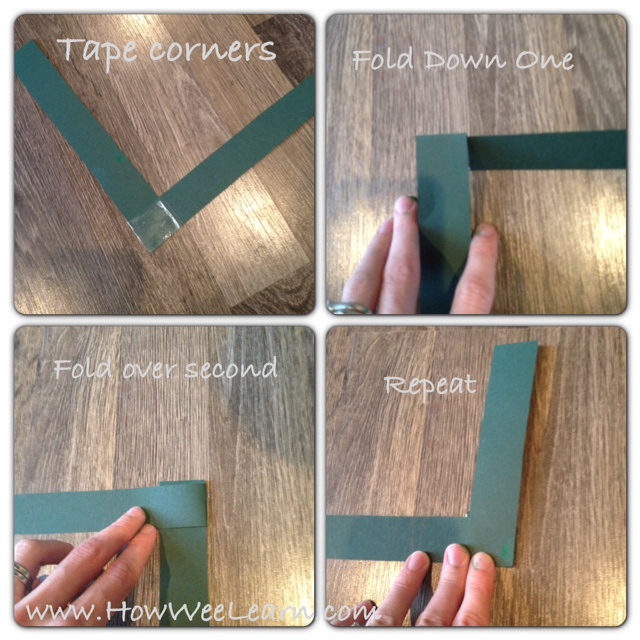 By now the paint was dry enough that we could tape this Bobbling Dinosaur hat together.  We taped two triangles together to make one spike and attached it to the ‘spine’ – then we did the same with the last two triangles.  We taped the two crescent moons together, and taped them to the back of the hat.  Finally, we taped the Accordion fold to the Dinosaurs Face and then taped the accordion fold to the front of the hat. 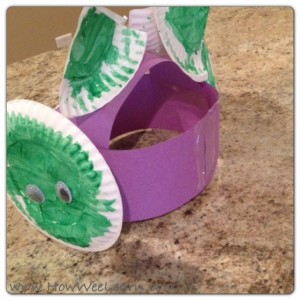 This hat is so very cute when wee ones are wearing it.  It was next to impossible for me to get a good picture as Sammy would not stop bobbling! 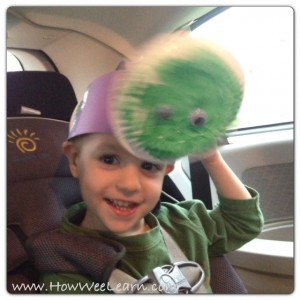 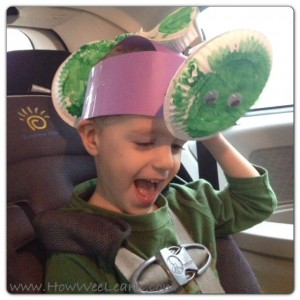 He has done so much pretend play with this hat – and has worn it pretty much constantly since we finished it.  Sammy caught a glimpse of himself in a mirror – which sparked even more creative play and fun. 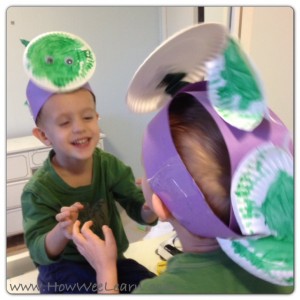 This Bobbling Dinosaur Hat is so simple and so fun! If your wee one loves dinosaurs, you should check out these other dinosaur crafts for kids ideas:

This Dinosaur Hatching Eggs Sensory Play we did a few days ago.

This easy Dinosaur craft for toddlers from Fantastic Fun and Learning

If you enjoyed this post, please consider Liking us on Facebook and Following us on Pinterest so you can keep joining us for more fun learning activities!

This website uses cookies to improve your experience while you navigate through the website. Out of these, the cookies that are categorized as necessary are stored on your browser as they are essential for the working of basic functionalities of the website. We also use third-party cookies that help us analyze and understand how you use this website. These cookies will be stored in your browser only with your consent. You also have the option to opt-out of these cookies. But opting out of some of these cookies may affect your browsing experience.
Necessary Always Enabled
Necessary cookies are absolutely essential for the website to function properly. This category only includes cookies that ensures basic functionalities and security features of the website. These cookies do not store any personal information.
Non-necessary
Any cookies that may not be particularly necessary for the website to function and is used specifically to collect user personal data via analytics, ads, other embedded contents are termed as non-necessary cookies. It is mandatory to procure user consent prior to running these cookies on your website.
SAVE & ACCEPT
55 shares