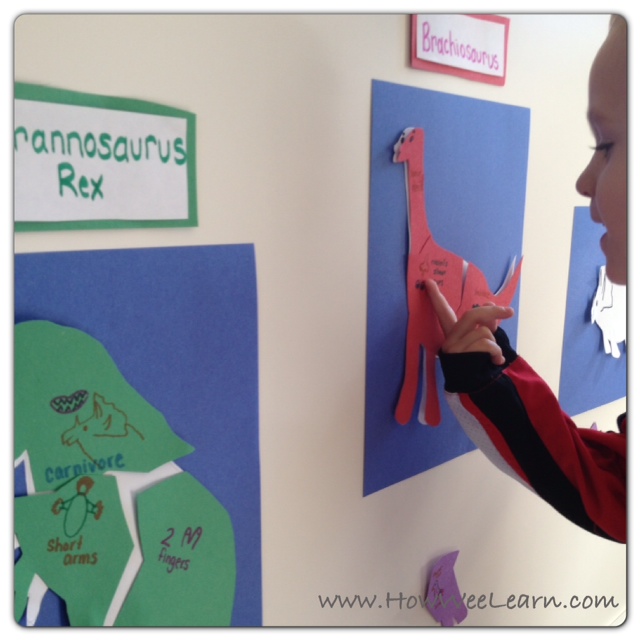 Learning about Dinosaurs was one of my favourite units in Kindergarten.  I am so happy that Sammy is beginning to have an interest in them!  There are so many fun activities I look forward to sharing with him (and you!)

The first Dinosaur activity we did were these ‘Dinosaur Facts for Kids’ Puzzles.  They take a little bit of time to put together – but well worth it with all of the fun and learning we have done with them!  Sammy loves puzzles.

We made these Dinosaur Facts for Kids Puzzles in 4 steps. 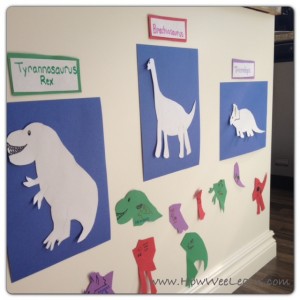 1.  Draw some big Dinosaurs (or print some of the computer).  I had intended to print, but our computer was out of ink – so I sketched (roughly – please be forgiving) 3 dinosaurs.  Here are links though, if you are lucky enough to have computer ink!

3.  Find a few interesting facts on each Dinosaur that your wee one would find neat.  Write these facts on the construction paper dinosaur in different spots.

We used these Facts: 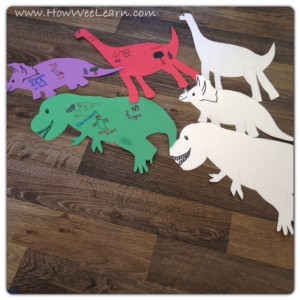 4.  Finally, cut your construction paper Dinosaur into 3 or 4 Puzzle Pieces, with one interesting fact in each piece.

Playing with your Dinosaur Facts for kids Puzzles!

There are many ways to play and explore these Dinosaur Puzzles. 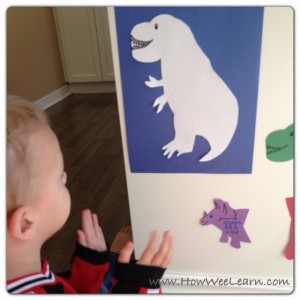 First, I read the names of each Dinosaur to Sammy.  He was familiar with all 3 and wanted to read them too.  Since the names are sooo long, I had him add in some claps to help him get all of the syllables.  At first he was saying “Tyranous Rex” but with the 6 claps he could say “Ty-ran-no-saur-us Rex”. 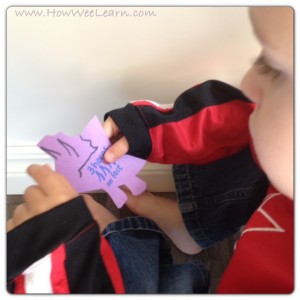 Then we played “Guess the Dinosaur” while we did the puzzles.  Sammy would pick a puzzle piece (which I had taped below the Dinosaurs) and we would read it together.  It said a fun fact about one of the Dinosaurs.  Sammy’s job was to guess which Dinosaur the puzzle piece belonged to.  They were colour coded, which helped when he was stuck.

After, Sammy and I read all of the fun facts on each Dinosaur together.  He kept running to tell Daddy when he learned something “so cool” 🙂

Finally, we decided to play these puzzles again – but in a Scavenger hunt.  I hid all of the puzzle pieces, Sammy found them and placed them with their Dinosaurs.

This was a fun way to really learn some neat things about Dinosaurs.  Learning the Dinosaur facts in this way really helped Sammy to remember them.

We have so many fun Dinosaur activities to come – as long as Sammy is game – he seemed awfully excited learning about them today, so I am very hopeful!

This website uses cookies to improve your experience while you navigate through the website. Out of these, the cookies that are categorized as necessary are stored on your browser as they are essential for the working of basic functionalities of the website. We also use third-party cookies that help us analyze and understand how you use this website. These cookies will be stored in your browser only with your consent. You also have the option to opt-out of these cookies. But opting out of some of these cookies may affect your browsing experience.
Necessary Always Enabled
Necessary cookies are absolutely essential for the website to function properly. This category only includes cookies that ensures basic functionalities and security features of the website. These cookies do not store any personal information.
Non-necessary
Any cookies that may not be particularly necessary for the website to function and is used specifically to collect user personal data via analytics, ads, other embedded contents are termed as non-necessary cookies. It is mandatory to procure user consent prior to running these cookies on your website.
SAVE & ACCEPT
42 shares