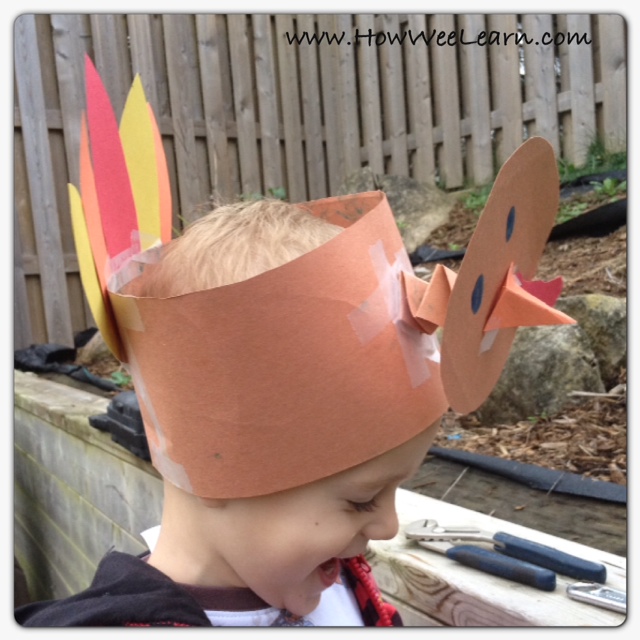 Madeline has so much fun with crafts!  These Bobbling Turkey Hats are great Thanksgiving crafts for kids.  Madeline made them all on her own – as a surprise for her brothers.  As you can see … 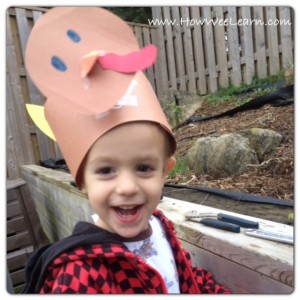 Sammy was thrilled!  As was Ben to get a hat of his very own.  These cute little turkey hats make great Thanksgiving crafts for kids.  They are so easy to make!  Madeline used:

To make these little bobbling head turkey hats Madeline first measured the boys heads with the construction paper, and taped it to fit around their heads.

After, she made (what we call) a ‘Fancy Accordion Fold’ for the neck of the turkey.  If you haven’t made these before, they are super duper easy – and much sturdier then a regular accordion fold.  To make them: 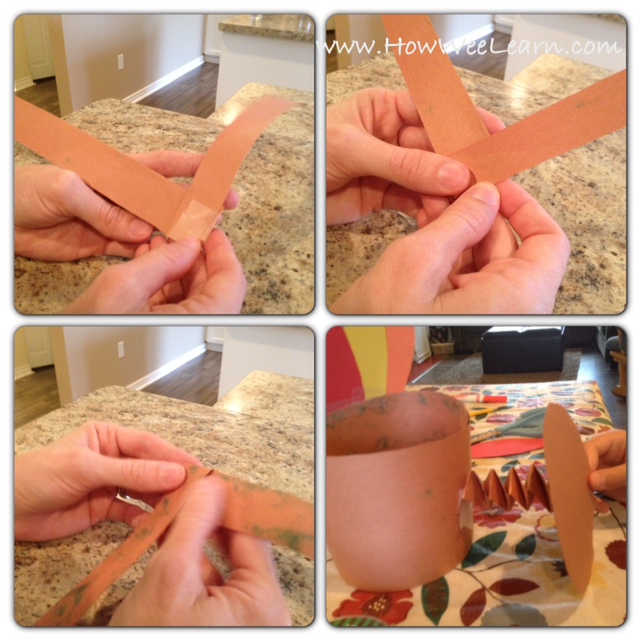 She then taped one end of this Fancy Accordion Fold to the hat, and left the other end open to put the Turkeys Face on.

Madeline cut out a circle to decorate as the Turkeys Face, complete with a little orange pop out beak, and taped it to the other end of the fancy accordion fold. 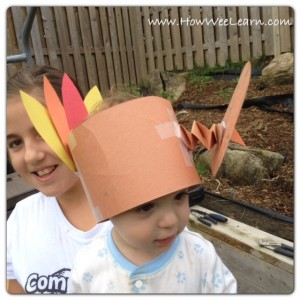 The boys were so very thrilled with their Bobbling Turkey Hats!  And Madeline was just as excited giving the hats to the boys.  Sammy wore his hat all day (which is no surprise – he LOVES hats).  Benjamin wore his for quite awhile (surprisingly) before removing it to inspect it closer – and then, of course, taste it too.

Making construction paper headbands or hats was always such a big hit in Kindergarten too!  There are so many possibilities.  Here are some super cute spider hats, from Education.com .  It’s nice when something so simple to create can be used and enjoyed so very much. 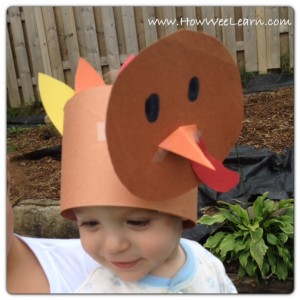 This website uses cookies to improve your experience while you navigate through the website. Out of these, the cookies that are categorized as necessary are stored on your browser as they are essential for the working of basic functionalities of the website. We also use third-party cookies that help us analyze and understand how you use this website. These cookies will be stored in your browser only with your consent. You also have the option to opt-out of these cookies. But opting out of some of these cookies may affect your browsing experience.
Necessary Always Enabled
Necessary cookies are absolutely essential for the website to function properly. This category only includes cookies that ensures basic functionalities and security features of the website. These cookies do not store any personal information.
Non-necessary
Any cookies that may not be particularly necessary for the website to function and is used specifically to collect user personal data via analytics, ads, other embedded contents are termed as non-necessary cookies. It is mandatory to procure user consent prior to running these cookies on your website.
SAVE & ACCEPT
86 shares