A photo on Friday, because sometimes all you need is the picture. And this is a cute one.  This is how a two year old looks when wearing a frozen hat … 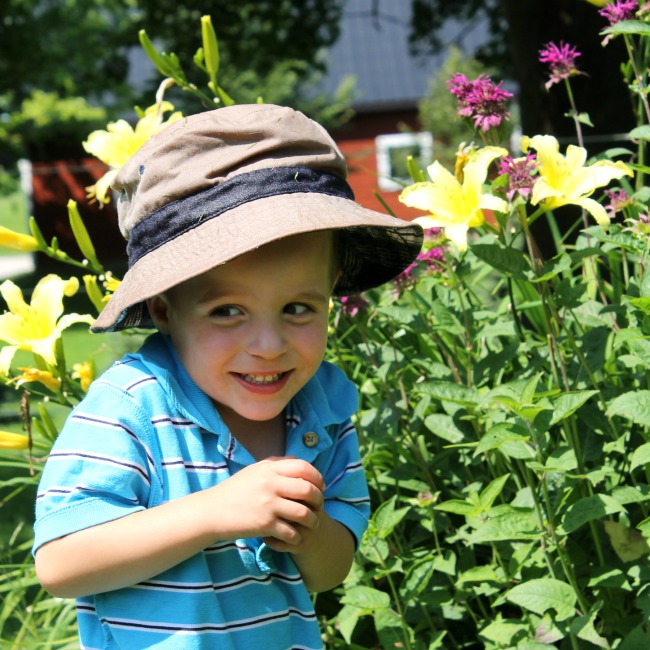 We made frozen hats by popping a wet sun hat in the freezer. We used hats that the boys had been wearing after a play in the sprinkler. I just squeezed them out and popped them on an upside down mixing bowl lined with parchment paper in the freezer.

Within 30 minutes they were perfect. Ben thought it was hilarious to wear a frozen hat …. and I also thought it was hilarious to see him wearing a frozen hat. I put a wash cloth on his head first so it wouldn’t be too cold (which definitely added to the humor). They stayed frozen for all of 3 minutes outside. But completely worth it. And they did stay chilly and wet for quite awhile.

A nice (and hilarious) way to cool down on a hot summer day.

Hope you are surviving the heat friends!

This website uses cookies to improve your experience while you navigate through the website. Out of these, the cookies that are categorized as necessary are stored on your browser as they are essential for the working of basic functionalities of the website. We also use third-party cookies that help us analyze and understand how you use this website. These cookies will be stored in your browser only with your consent. You also have the option to opt-out of these cookies. But opting out of some of these cookies may affect your browsing experience.
Necessary Always Enabled
Necessary cookies are absolutely essential for the website to function properly. This category only includes cookies that ensures basic functionalities and security features of the website. These cookies do not store any personal information.
Non-necessary
Any cookies that may not be particularly necessary for the website to function and is used specifically to collect user personal data via analytics, ads, other embedded contents are termed as non-necessary cookies. It is mandatory to procure user consent prior to running these cookies on your website.
SAVE & ACCEPT
0 shares