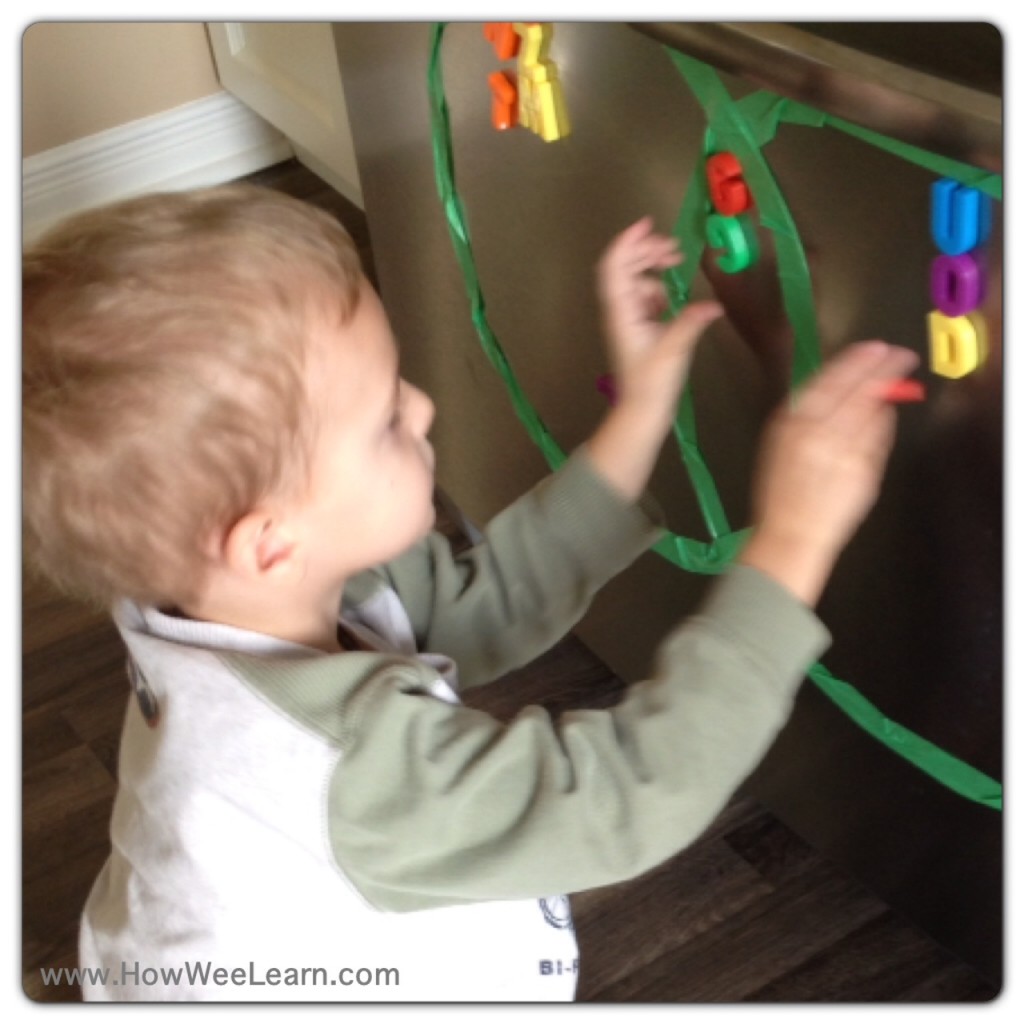 As I mentioned yesterday, Sammy loves alphabet activities right now.  Yesterday I shared our Alphabet Activities for Preschoolers to practice letter forming and word building for wee ones without the need for fine motor skills.  Today I thought I would share a different way to learn the alphabet.

This activity is wonderful as it can be made very simple, or extremely complicated – making it great for any age.  All 3 of my wee ones played this game in one way or another, and there is a ten year span between them!  I like this way to learn the alphabet as I can focus on one specific thing at a time.  Let me show you what I mean.

Learn the Alphabet with a Venn!

We use Venn Diagrams all the time in Kindergarten, and I use them at home too (like with this Nature Sorting Math Game).  I find they are a great way for wee ones to organize their thoughts.  Most kids I have worked with like having distinct categories (yes, no – right, wrong) and the Venn diagram helps introduce the idea of the “other” category.

I decided to pop a Venn Diagram up on our Fridge with painters tape and pulled out the magnet letters.  I had these put away for awhile, as Benjamin kept putting them in his mouth – so it was something different and interesting for my wee ones.  We sorted out the capital letters only and put them on the fridge.  This was a great activity in itself!  Sammy helped me sort capital from lower case, looking closely at each letter. He pretty much sorted them based on his ability to recognize them – if he didn’t recognize it, it was likely a lower case, as we haven’t done much lower case letter recognition yet. When putting them on the fridge, we tried to put the letters the right way up – another great way to learn the alphabet! 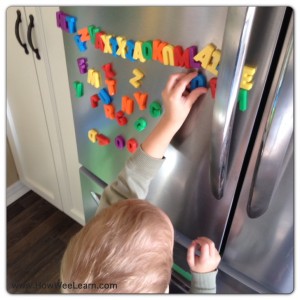 Sammy then played with the letters for quite some time, arranging them in lines and in the Venn Diagram too.  He wasn’t sorting with the Venn, in fact at one point he was using the Venn as a race track and the letters were cars 🙂  How I love creative and imaginative play!  Once his game was winding down I asked if he wanted to play a letter sorting game.  Sammy is very eager to learn the alphabet so he was excited to play. 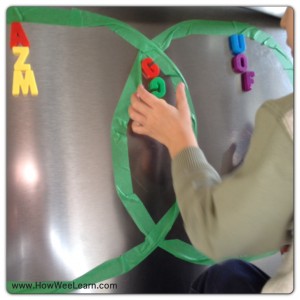 Some letters Sammy put in  a spot that I didn’t really think they should go – but it made sense to him.  The letter ‘U’ to me has 2 straight sides and one curved side – but Sammy saw it as one giant curve.  It really doesn’t matter at all!

Sammy sorted about 10 letters before losing interest in this activity.  He told me he had a different game that we could play.  He was going to sort by his favourite letters.  The ones he loved would go in one circle, the ones he didn’t love would go in the other, and the ones he sort of loved would go in the middle.  He loves the word “love” right now.  What was even better was that he loved all of the letters – except N.  No reason, he just doesn’t love it. 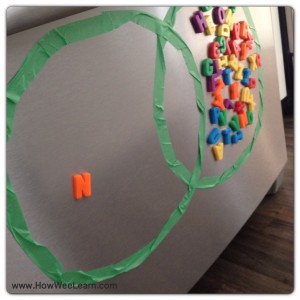 Benjamin, who is 12 months, played with and explored the magnets too.  He, of course, has no interest in beginning to learn the alphabet!  I used this activity instead as a time for him to explore how magnets work and to practice colour words with him too.  I also practiced having him following directions asking him to put the letters in different spots.  “Can you put that yellow ‘I’ on your head like a hat?” Don’t let his innocent gaze fool you – he wore that yellow ‘I’ hat like nobody’s business! 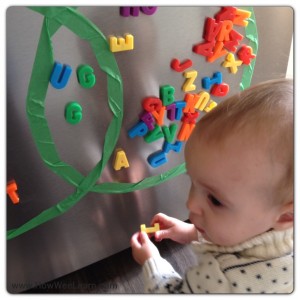 Madeline, who is 11 did some sorting in a more complicated way.  She sorted the letters based on colour (which colours contained the primary colour red) and based on number of corners.  Then we did some tricky math – which she did great with!  That girl is always up for a challenge!  After Sammy sorted the letters based on straight and curved sides I told Madeline: “There are 26 letters in the alphabet.  8 Letters have both curved and straight sides.  There are 5 times more letters that have only straight sides then letters that have only curved sides.  How many letters have straight sides only?”  After some work, and a whole lot of “Don’t tell me!  I can do it! Don’t tell me!” She figured it out.  My Smart Cookie. But she wouldn’t wear the yellow ‘I’ hat.

I love challenging myself to find learning activities I can use with all of my wee ones.  We like to do things together, and finding activities that appeal to a 1 year old, 3 year old, and 11 year old can certainly be a challenge!  But it is absolutely worth it.  It is so wonderful that we can be learning, exploring, and creating together.

This website uses cookies to improve your experience while you navigate through the website. Out of these, the cookies that are categorized as necessary are stored on your browser as they are essential for the working of basic functionalities of the website. We also use third-party cookies that help us analyze and understand how you use this website. These cookies will be stored in your browser only with your consent. You also have the option to opt-out of these cookies. But opting out of some of these cookies may affect your browsing experience.
Necessary Always Enabled
Necessary cookies are absolutely essential for the website to function properly. This category only includes cookies that ensures basic functionalities and security features of the website. These cookies do not store any personal information.
Non-necessary
Any cookies that may not be particularly necessary for the website to function and is used specifically to collect user personal data via analytics, ads, other embedded contents are termed as non-necessary cookies. It is mandatory to procure user consent prior to running these cookies on your website.
SAVE & ACCEPT
33 shares