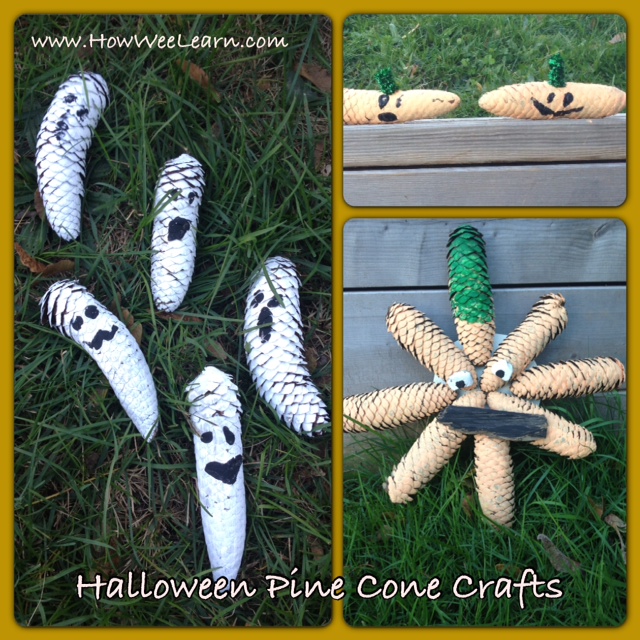 Sammy is a collector of ‘treasures’ – as I believe most 3 year olds are.  Lately on our walks he has been finding and collecting pine cones.  We found some great big beautiful ones yesterday, so decided they would be perfect for pine cone crafts for kids!  We know some great “5 Little” Halloween poems, so decided to match them up.

These pine cone crafts are so easy.  We made 5 little ghosts and 5 little pumpkins (well, 4 little pumpkins and one great big Mama – which I have been told by my facebook friends, more resembles an octopus or starfish!).

To make these ghosts, Sammy simply painted the pine cones white (we used a nice thick acrylic paint).  We then added black paint for eyes and mouths.  I will hang them up in the tree, once the novelty of playing with them has worn off a bit! 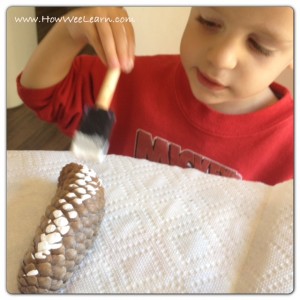 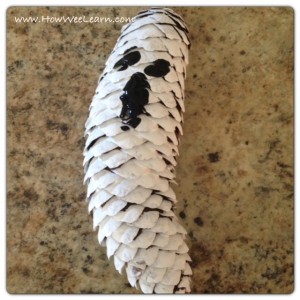 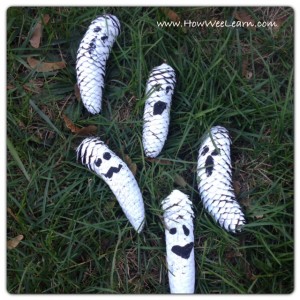 Five little ghosts dressed all in white, were scaring each other on Halloween night.

The third ghost said, “You can’t run away from me.”

And the fourth one said, “I’ll scare everyone I see!”

Then the fifth one said, “It’s time to disappear!”

“Happy Halloween, we will see you next year” 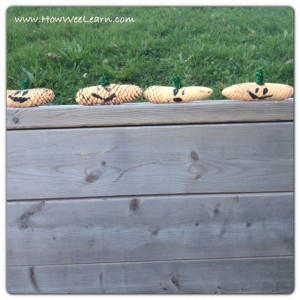 We also made some cute little pumpkins from our pine cones.  Madeline painted them orange, added black paint for the eyes and mouth, and hot glued a curled pipe cleaner for the stem.  I told her I would make one big one, so she just made 4.

For the Big Mama Pumpkin, I hot glued the pine cones on a paper plate in a circle  (thin points in to the middle).  Then Sammy painted them orange, with one half pine cone green for the stem.  He also painted stones white and black for eyes and a piece of tree bark black for the mouth. 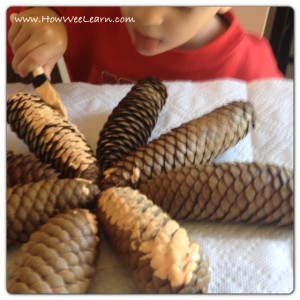 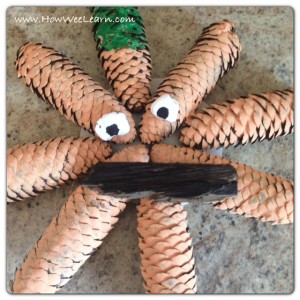 We have been using these 5 Little Pumpkins with this poem:

These pine cone crafts for kids were tons of fun for my wee ones.  It was neat painting on such a different texture, and fun to think about different creatures to make from the pine cones (Madeline also made a Witch and Monster – and a Jalapeno Pepper)

The rhyming poems are so much fun and full of learning too.  I love hearing Sammy sing them (well, his version of them anyways) while he is playing independently.

Halloween will be here before we know it!  Have you done any Halloween crafts?

This website uses cookies to improve your experience while you navigate through the website. Out of these, the cookies that are categorized as necessary are stored on your browser as they are essential for the working of basic functionalities of the website. We also use third-party cookies that help us analyze and understand how you use this website. These cookies will be stored in your browser only with your consent. You also have the option to opt-out of these cookies. But opting out of some of these cookies may affect your browsing experience.
Necessary Always Enabled
Necessary cookies are absolutely essential for the website to function properly. This category only includes cookies that ensures basic functionalities and security features of the website. These cookies do not store any personal information.
Non-necessary
Any cookies that may not be particularly necessary for the website to function and is used specifically to collect user personal data via analytics, ads, other embedded contents are termed as non-necessary cookies. It is mandatory to procure user consent prior to running these cookies on your website.
SAVE & ACCEPT
32 shares