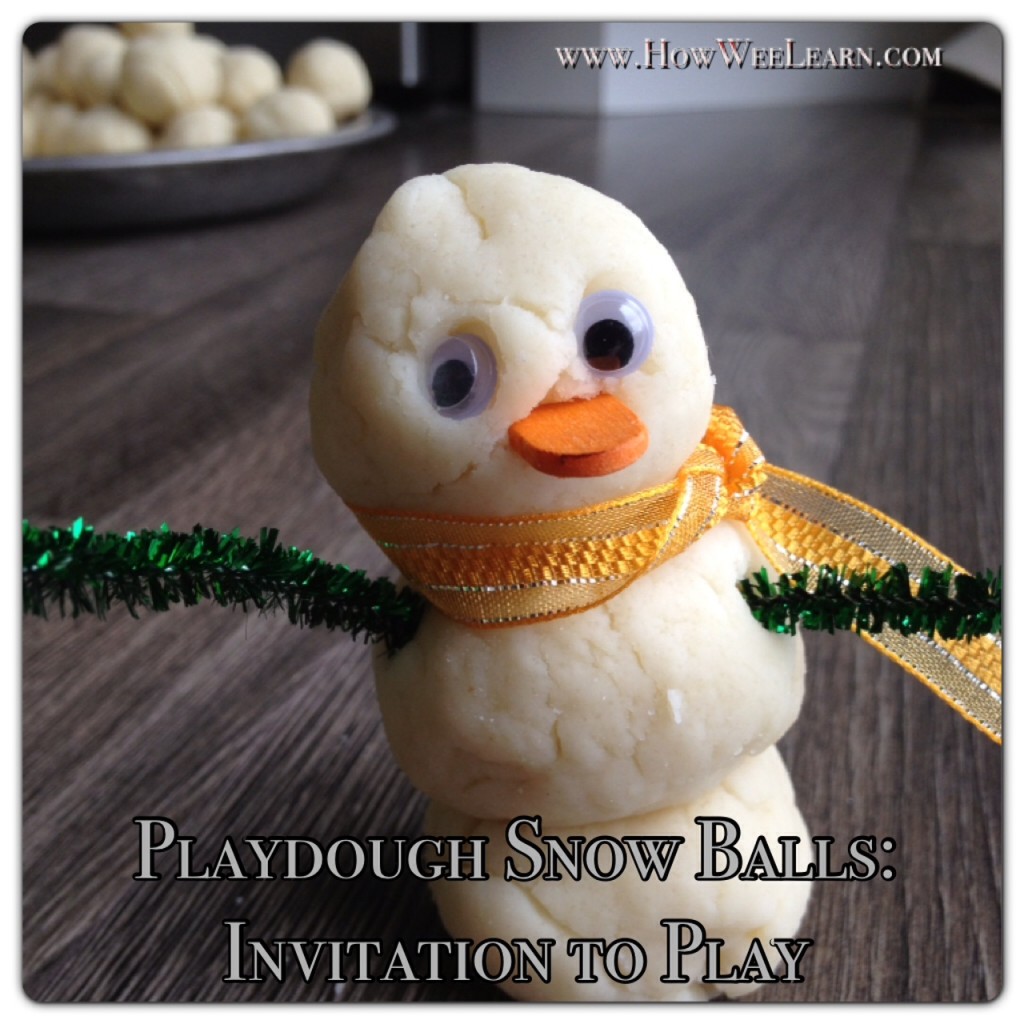 I cannot believe that it is November and we have yet to have real snow!  We have had some freezing cold weather, frost, and even flakes in the air – but no real snow on the ground.  We almost always have snow by Halloween, so we had really been talking about snow to Sammy.  he is so excited for all of the snowy fun ahead!

So since we are still waiting I created Playdough Snowballs (using our Ultimate Playdough Recipe of course) and set up an Invitation to Play for Sammy.  I rolled the playdough into snow balls and set out buttons, ribbon, googly eyes, pipe cleaners, and popsicle sticks.  I had envisioned Sammy creating sweet little Snowmen … 🙂 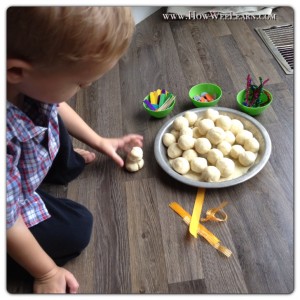 Well, I should have known that my creative boy would have his own imaginative ideas!  He did create Snowmen, yes, but quite differently then I had thought he would.  I had also given Sammy some toothpicks to help stick his snowmen together.  Hmmm, turns out Sammy really likes toothpicks.  He used them to stick his snowman together, and also to poke in eyes, a nose, and a mouth.  He also used them to stick a whole family of these snowmen together.  My pretty, colourful invitation to play supplies sat untouched.

Once he finished his snowman family, he got really creative.  There happened to be some little cars sitting rather close by so he decided to set up a race track for them (out of snowballs).  It was sort of like a weaving obstacle course.  Very fun.  And rather noisy … 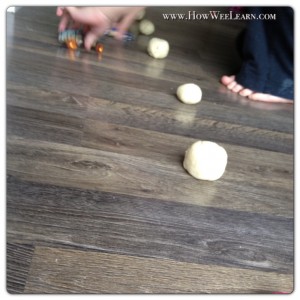 Next, he noticed that the cars left an impression when they crashed into the snowballs.  So Sammy made up a very neat game!  He would press one of his cars into a snowball and I would have to guess which car left the imprint.  Then we switched.  It was quite a neat game and reminded me of our Playdough Nature Walk. 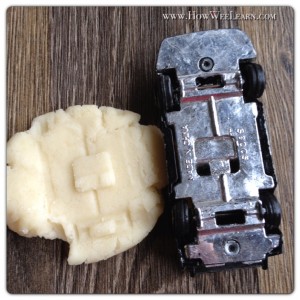 After this game Sammy decided to make a parking lot for all of his cars.  He pushed each car into a snowball, and the imprint would remind him which car was to park in which spot.  Such a creative little man!  And still, my invitation to play supplies (so pretty and brightly coloured) sat untouched.

I must tell you that I have come along way.  I can admit that it was rather agonizing not suggesting that Sammy make a beautiful snowman.  But I didn’t.  And his imagination and creativity ran wild!

When Madeline got home and had a turn with this invitation she immediately made a very cute snowman. And I am sure I actually let out a sigh of relief. Sammy was watching Madeline make her snowman and I was interested to see what he would do … He asked Madeline, “When you are done making your snowman do you want to play a snowball, crushing, racing game with me?”  🙂

Please consider following us on Pinterest and Liking us on Facebook so we can share more creative learning ideas with you and your wee ones!  Thank you!

This website uses cookies to improve your experience while you navigate through the website. Out of these, the cookies that are categorized as necessary are stored on your browser as they are essential for the working of basic functionalities of the website. We also use third-party cookies that help us analyze and understand how you use this website. These cookies will be stored in your browser only with your consent. You also have the option to opt-out of these cookies. But opting out of some of these cookies may affect your browsing experience.
Necessary Always Enabled
Necessary cookies are absolutely essential for the website to function properly. This category only includes cookies that ensures basic functionalities and security features of the website. These cookies do not store any personal information.
Non-necessary
Any cookies that may not be particularly necessary for the website to function and is used specifically to collect user personal data via analytics, ads, other embedded contents are termed as non-necessary cookies. It is mandatory to procure user consent prior to running these cookies on your website.
SAVE & ACCEPT
61 shares