Today was day 4 of Science Experiments for Kids in our house. It was a warm day here, so naturally, the kids decided it would be a great day to play with some ice. 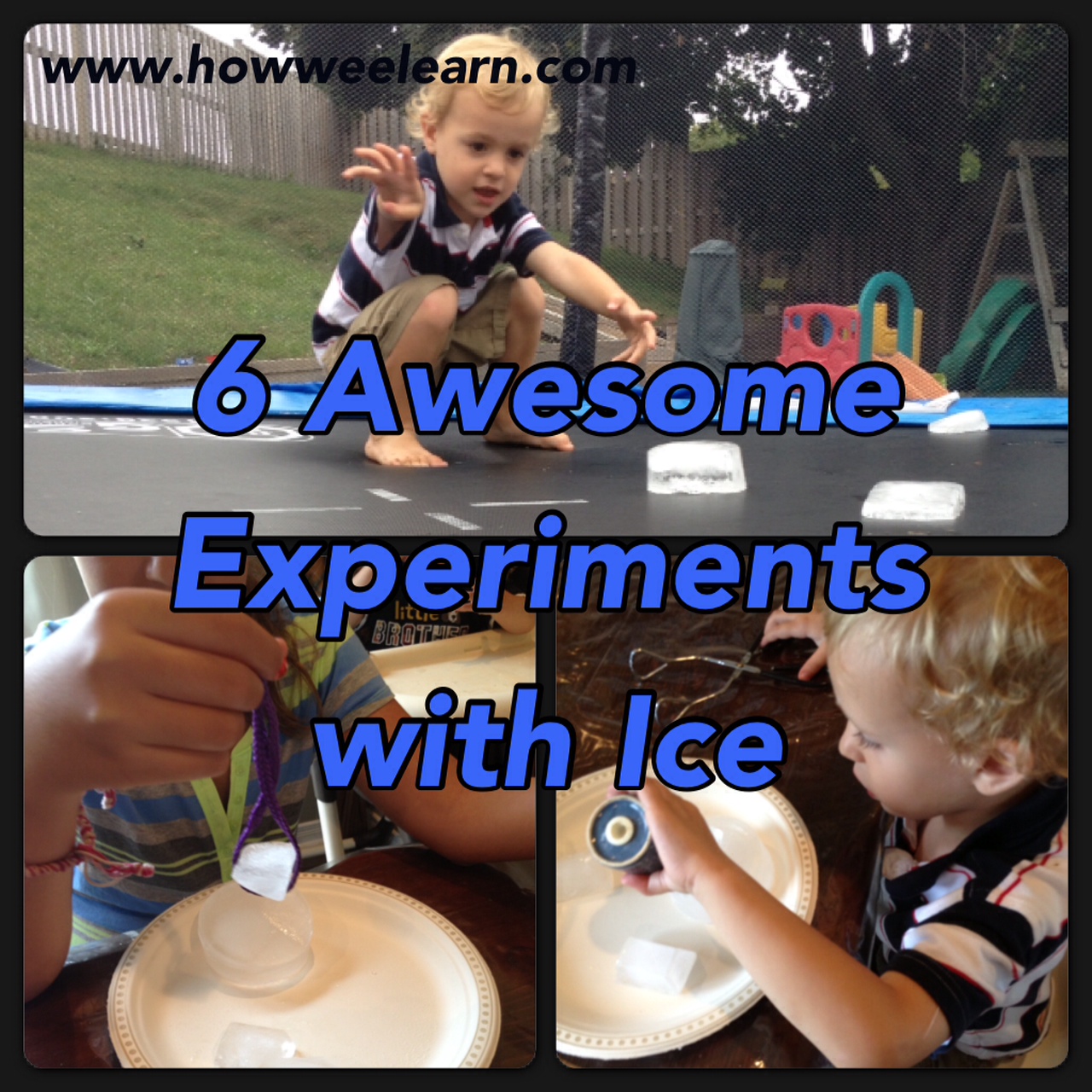 1. Discover and Learn through Play 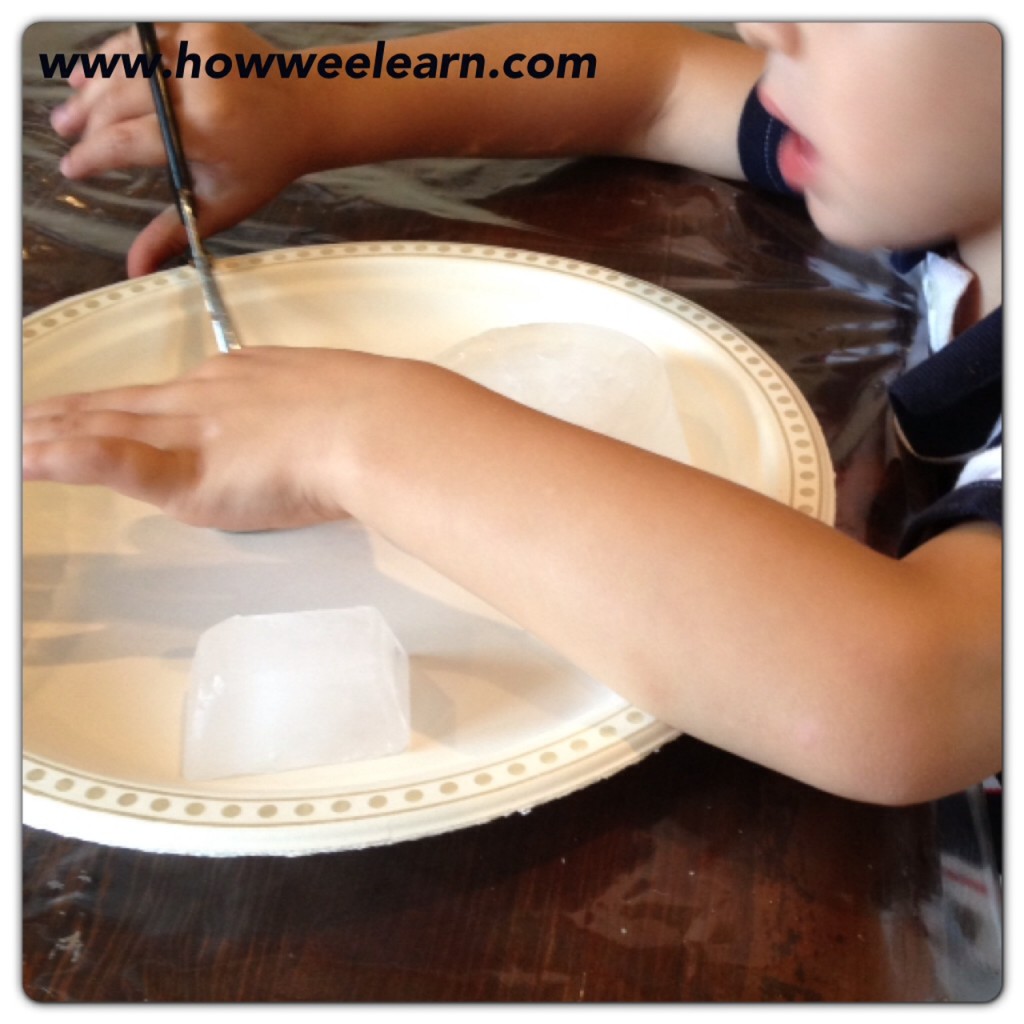 Exploring this ice was our first science experiment. Sam explored the ice with his hands and other simple tools (butter knife and tongs). We learned all about the different properties of ice. This was an excellent vocabulary-building activity for him as well. Among many other things, he realized the ice was tricky to pick up because it was slippery, that it was very, very chilly to hold in his hand, and that it was very hard to stack it and make a tower!

2. What Happens When We Add Salt to Ice? 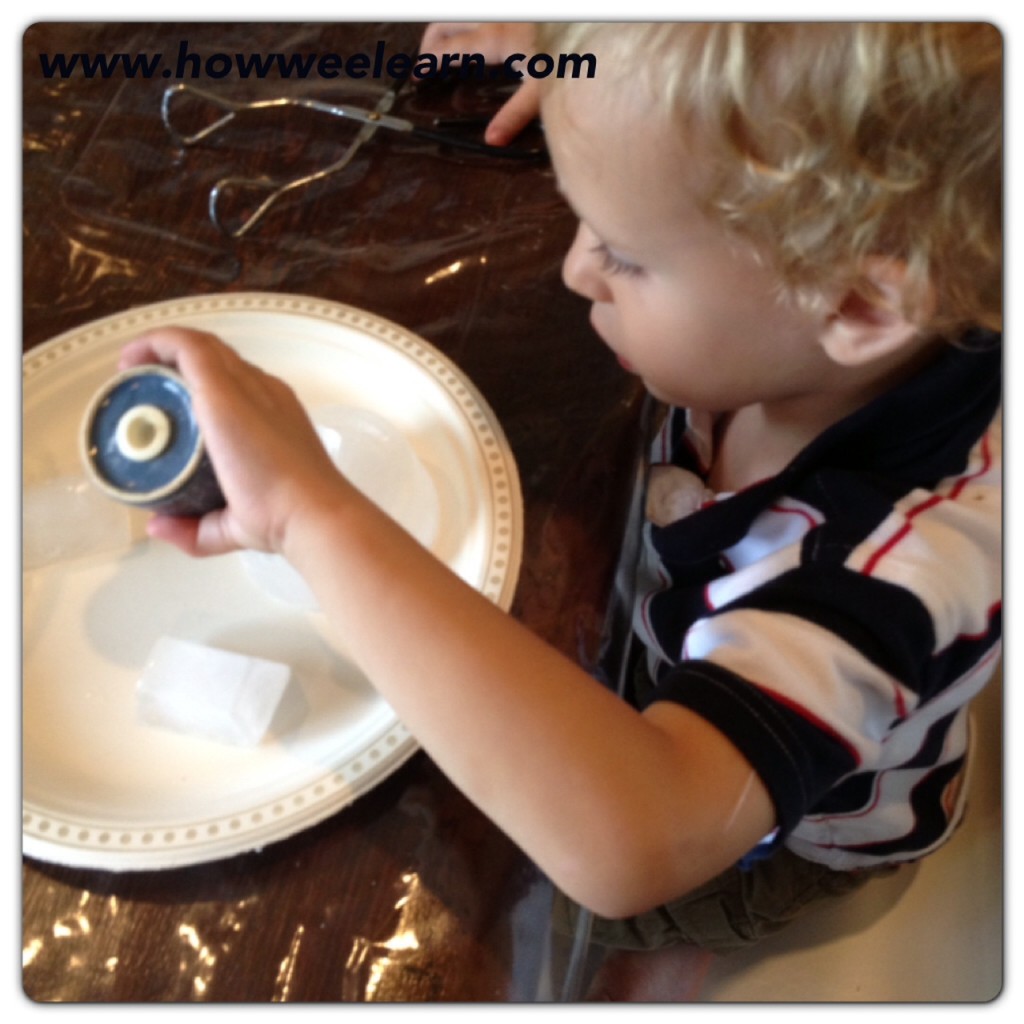 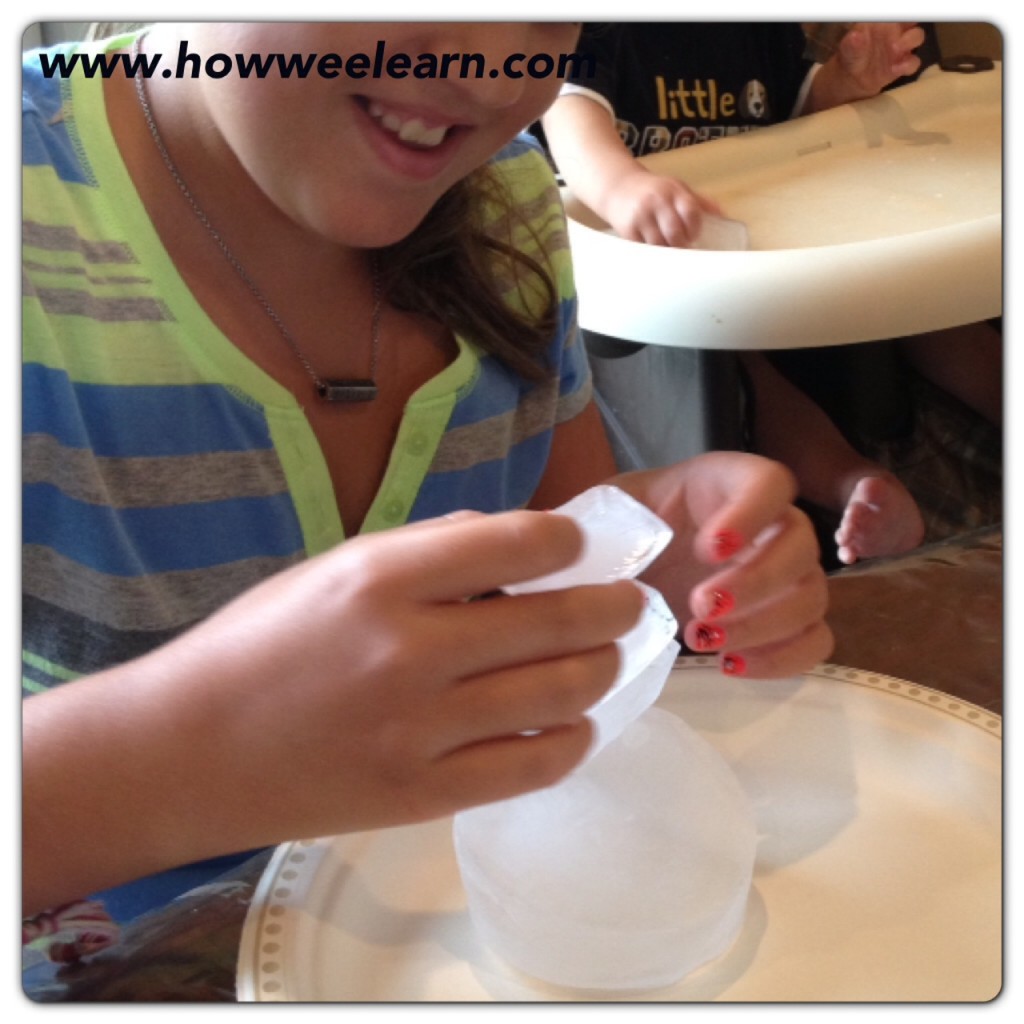 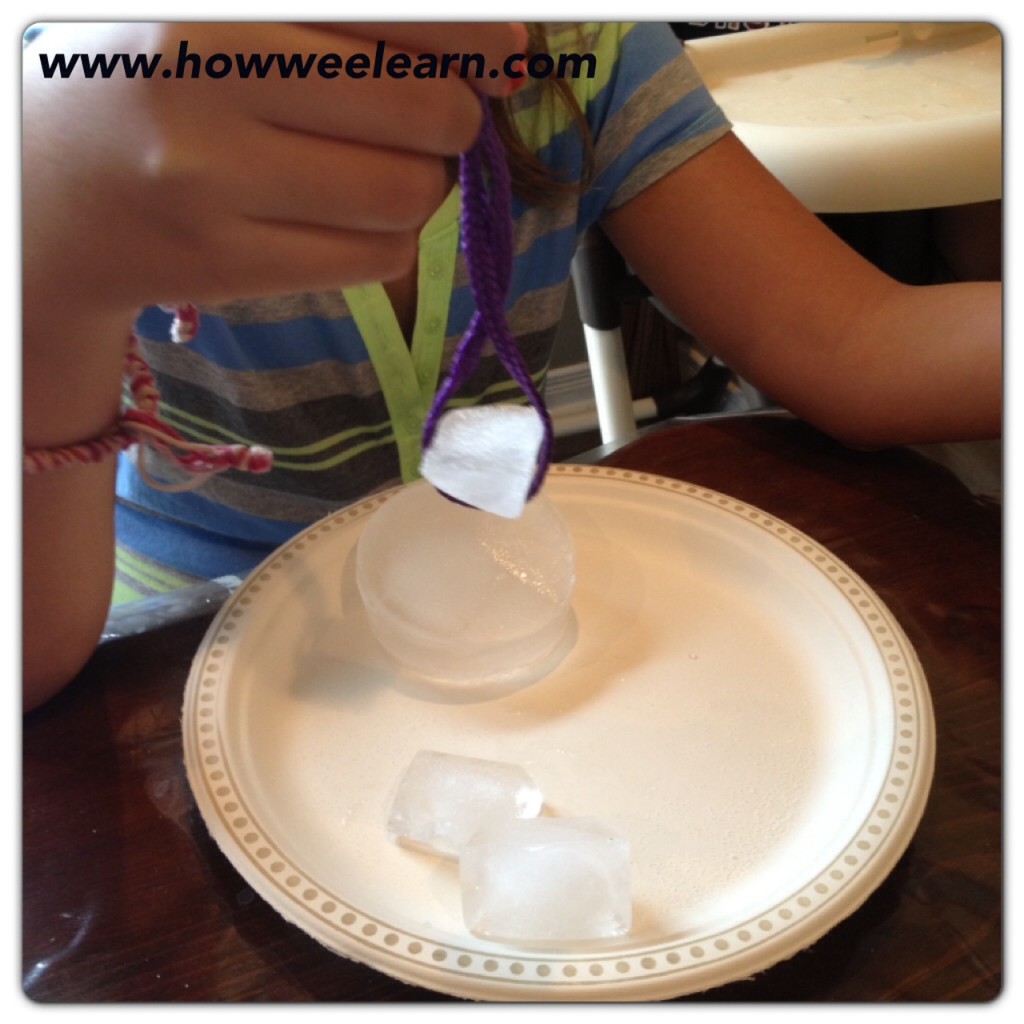 After doing our initial science experiment with play, Sam discovered that the ice would not stack very well together as it was too slippery. I told him there was something he could use that acted like glue for ice. It gave the ice some texture and could make it easier to stack. He couldn’t guess what it was, and neither could his big sister! The kids then spent quite a long time experimenting with ice and salt.

I gave Madeline a challenge to try to pick up the ice cubes with a string. She managed by adding salt. She was actually able to swing it around and keep it on the string! Sam, of course, needed to try this one as well.

3. How Can We Make Ice Melt Faster?

The next science experiment was also a challenge. I challenged both Sam and Madeline to see if they could make an ice cube melt faster. Sam put his in a bowl of hot water (smart cookie!). Madeline decided to add salt to her hot water thinking it would make it melt even faster. The race was on! Surprisingly, both Sam and Madeline’s ice melted at the same speed. But mine, which I held closed in my hand, melted the slowest—I was shocked! The kids were oh so proud of themselves for beating Mama.

4. Will Ice Make the Water Overflow? 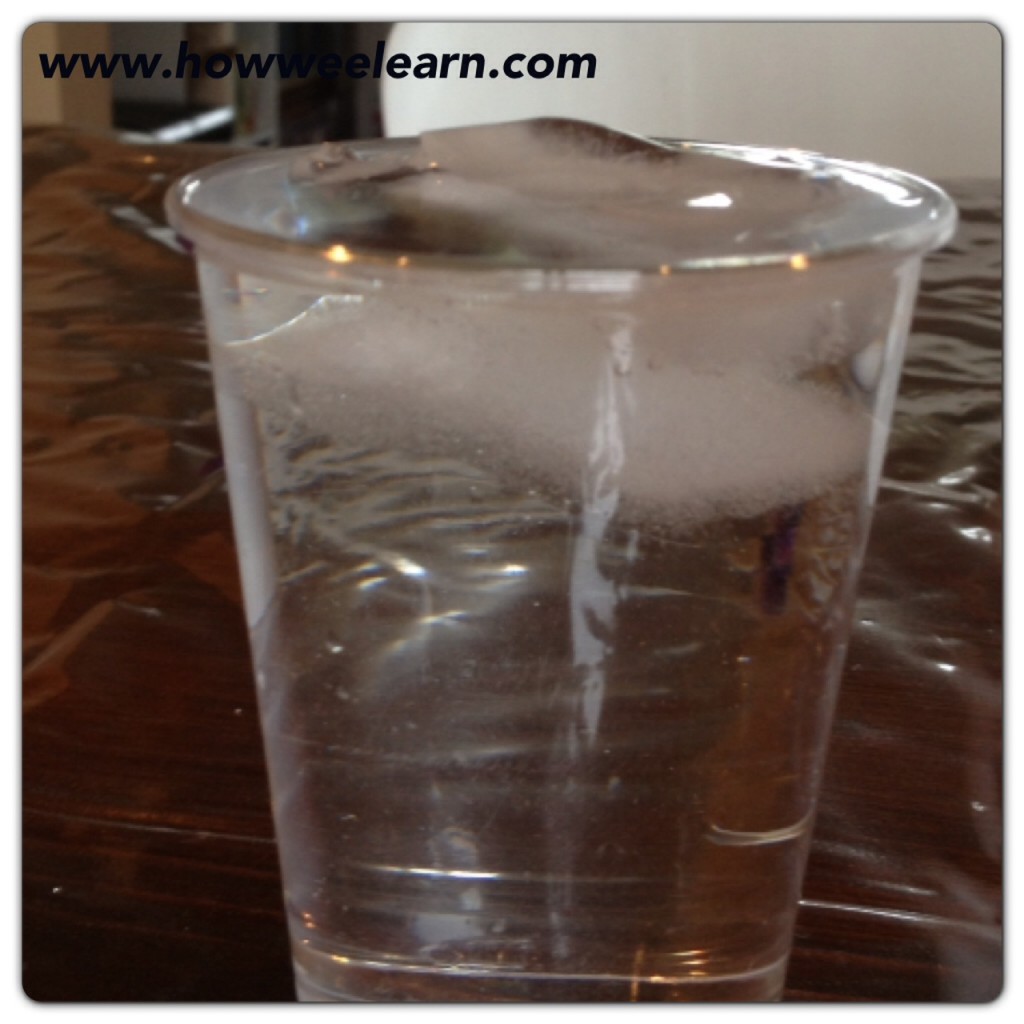 Our next science experiment was putting ice in a cup and filling it all the way to the very top with water. I asked the kids what they thought would happen when the ice melted. Madeline thought the cup would overflow when the ice melted. When I asked her why, she explained there was nowhere for the water from the melted ice to go—it would overflow the cup. When the ice was all melted, not a drop had overflowed the cup! The ice took up the same amount of space as the melted ice, just in a different form. (Well, actually water expands when frozen, so there would have been a bit less water, but it wasn’t noticeable in our cup!) 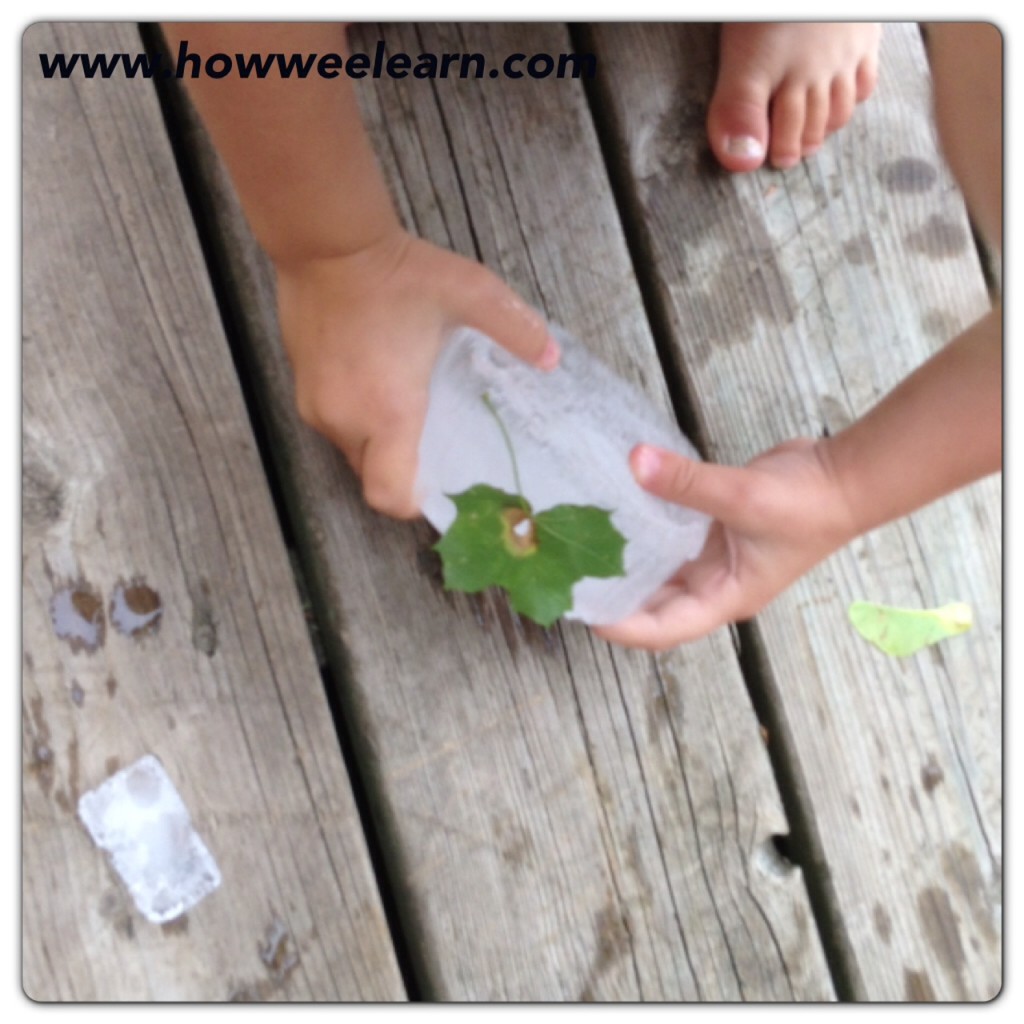 That had been enough sitting science experiments for my kids (well the younger two anyways), so we brought our ice outside and the kids tried to paint with it. Using the ice cubes themselves wasn’t much fun, as they were not melting fast enough to leave water lines. Sam noticed his hands were wet, so started “painting” by holding on to the ice, letting it melt a bit, and then using his hands to draw. He also found a leaf, made it wet, and painted with the leaf. 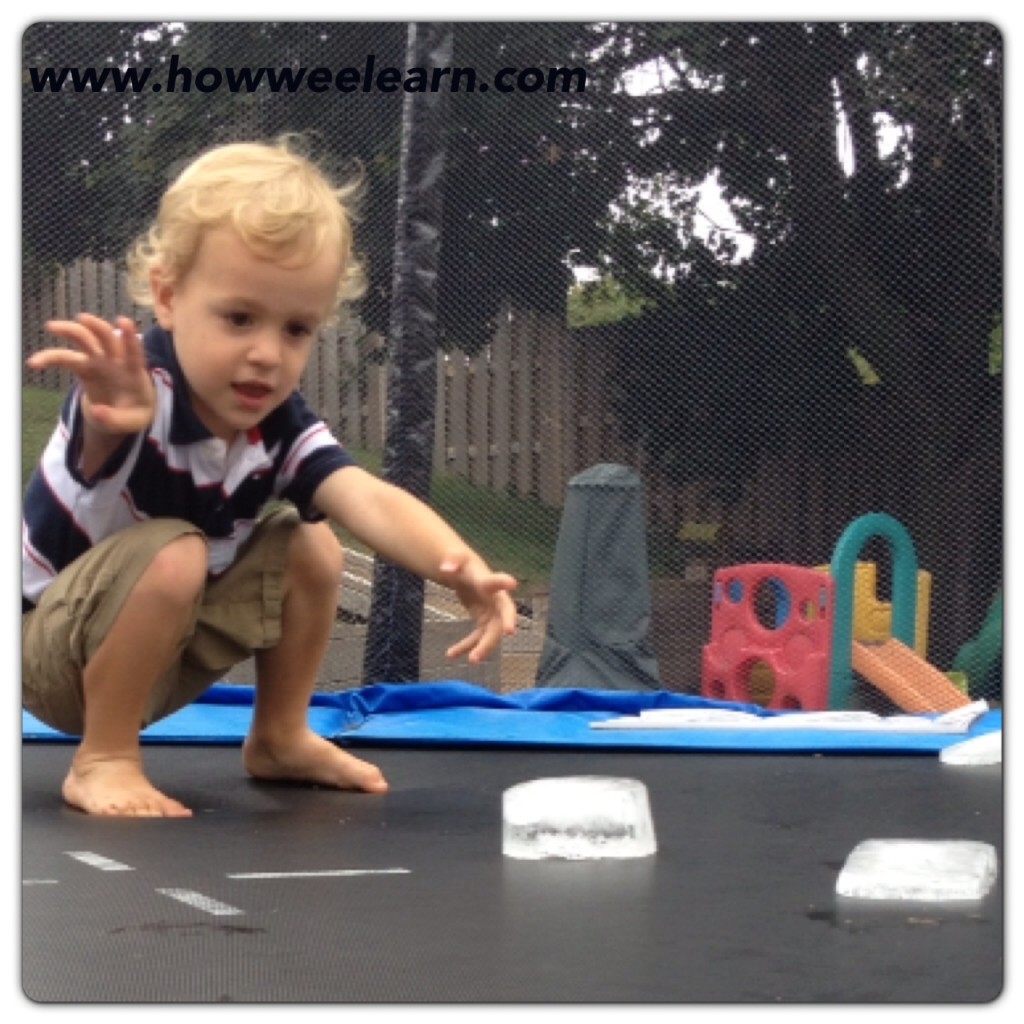 This science experiment was by far the most fun… for everyone! We brought the ice on our trampoline to see which would slide better, the salted ice or the plain ice. The plain ice definitely slid better, but the salted ice certainly did still slide. This was so much fun for the kids (and me too). It was a good 30 minutes of fun!

These 6 science experiments for kids using ice can be done all at the same time, or just pick and choose those of interest to your little one. Exploring ice and water is very fun for little ones and a wonderful way to expose them in a very early way to the fun of science!

Whenever we play these activities I am sure to tell my little ones that they are being ‘scientists.’ I want them to know that science is very fun and part of everyday life.

Do you have a favourite experiment to do with ice?

This website uses cookies to improve your experience while you navigate through the website. Out of these, the cookies that are categorized as necessary are stored on your browser as they are essential for the working of basic functionalities of the website. We also use third-party cookies that help us analyze and understand how you use this website. These cookies will be stored in your browser only with your consent. You also have the option to opt-out of these cookies. But opting out of some of these cookies may affect your browsing experience.
Necessary Always Enabled
Necessary cookies are absolutely essential for the website to function properly. This category only includes cookies that ensures basic functionalities and security features of the website. These cookies do not store any personal information.
Non-necessary
Any cookies that may not be particularly necessary for the website to function and is used specifically to collect user personal data via analytics, ads, other embedded contents are termed as non-necessary cookies. It is mandatory to procure user consent prior to running these cookies on your website.
SAVE & ACCEPT
40 shares