As well, be sure to check out my Quiet Bins for tons of letter learning ideas little ones can do all on their own.

We have been playing with letters of the alphabet for quite some time in our house.  I like to encourage my kids to  ‘play’ with the letters and alphabet recognition activities, keeping the learning fun and meaningful.  Most of the time, we simply have the letters out in the play room, or on the floor with sticky tape, and as we are playing games just happen naturally.  Once in awhile we do an actual letter matching game. 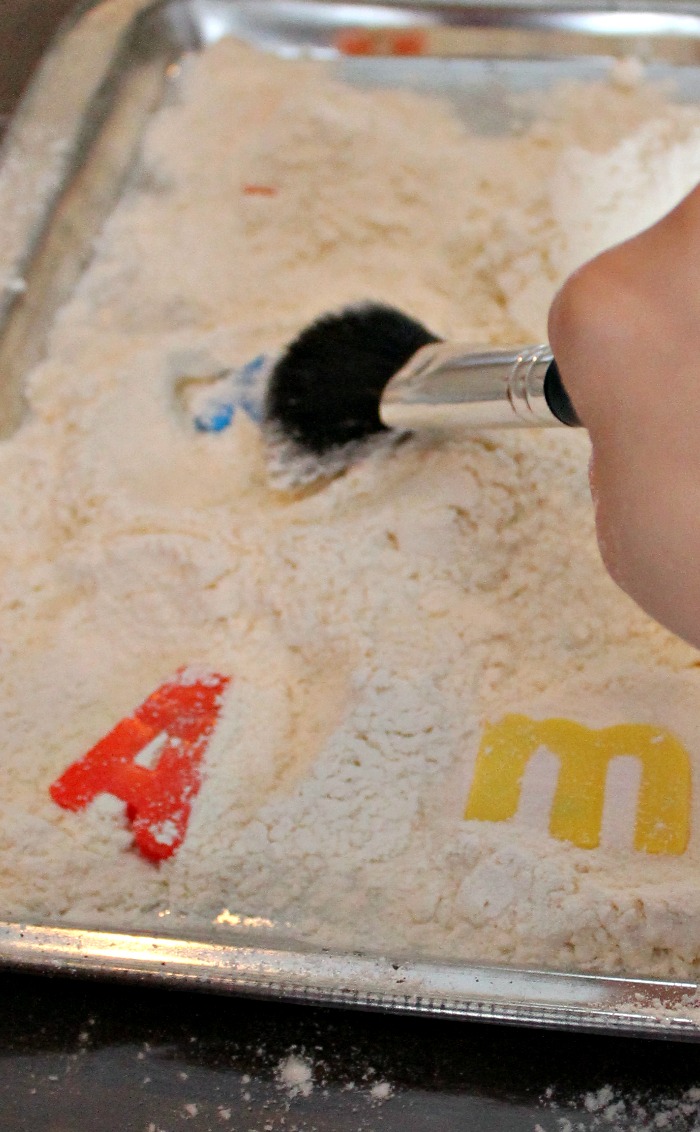 May contain affiliate links – thank you for your support

This morning while Madeline (11) was doing some writing at the kitchen table, Sammy (3.5) decided he would like to learn something new.  I asked him if he wanted to play with some letters, and he said he did, but he wanted to learn about the ‘little’ ones.  We have been playing with uppercase letters up to this point, using lowercase once in awhile with names or in environmental print.  So he does know that they exist, but we haven’t spent much time playing with them.

I thought I would make it a very fun introduction – using very few letters and a fun new tool.

Ideally I would have used the letters of Sammy’s name, but I didn’t have the right magnet letters … so we made do and used what we had.

For this Letter Matching Game:

First, I put the alphabet letters on the cookie sheet.  I also gave Sammy a piece of paper with the 6 letters written on it and we talked about them.  He told me the letters he recognized (all of the uppercase) and a few of the lowercase too (mostly the ones that looked the same, and also the ‘a’ from his name). 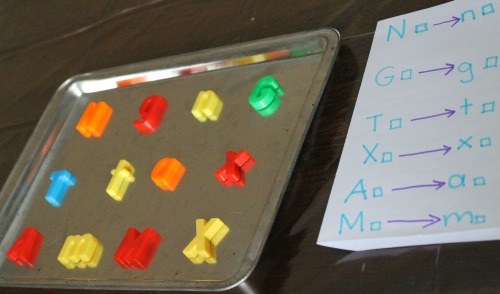 Next I sprinkled flour over the magnet letters.

Then he went on an excavation – just like in our dinosaur dig – using the blush brush (I believe this is what most archeologists use).  When he discovered a letter he tried to match it to his piece of paper.  A simple letter matching game. 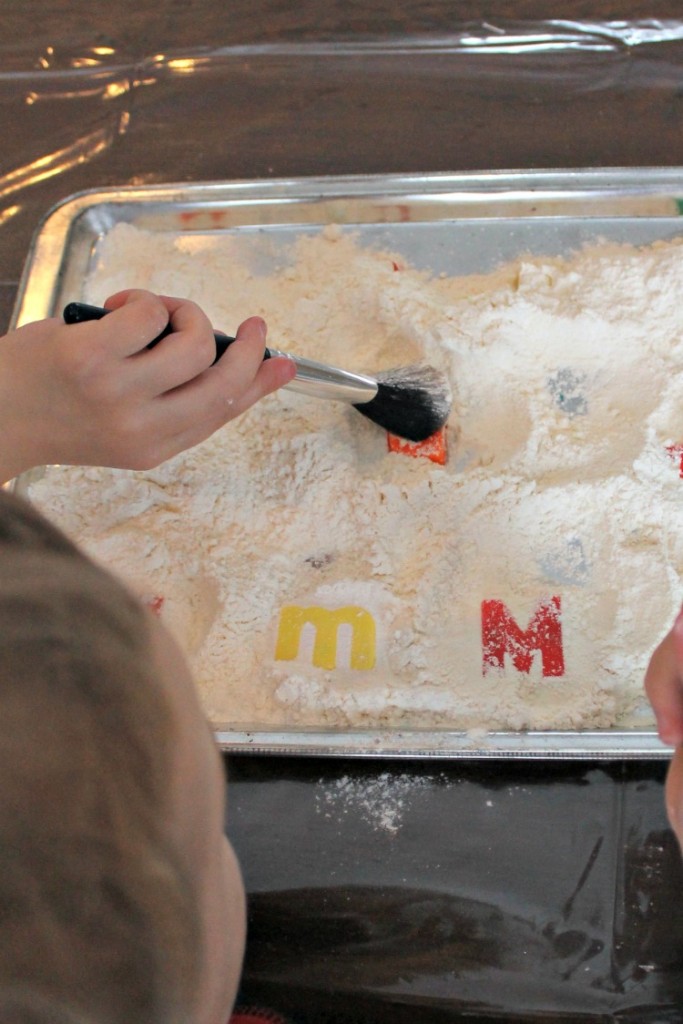 Once Sam found all of the letters, he took them out and matched them to the letters on the piece of paper. 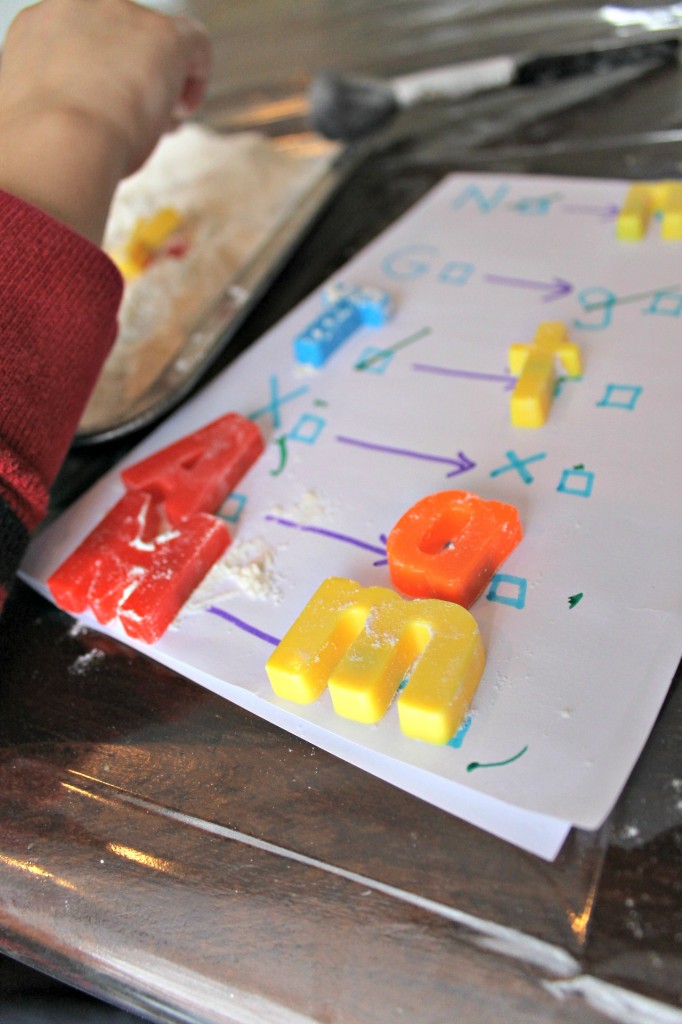 And finally, he then used the blush brush to draw pictures in the flour 🙂 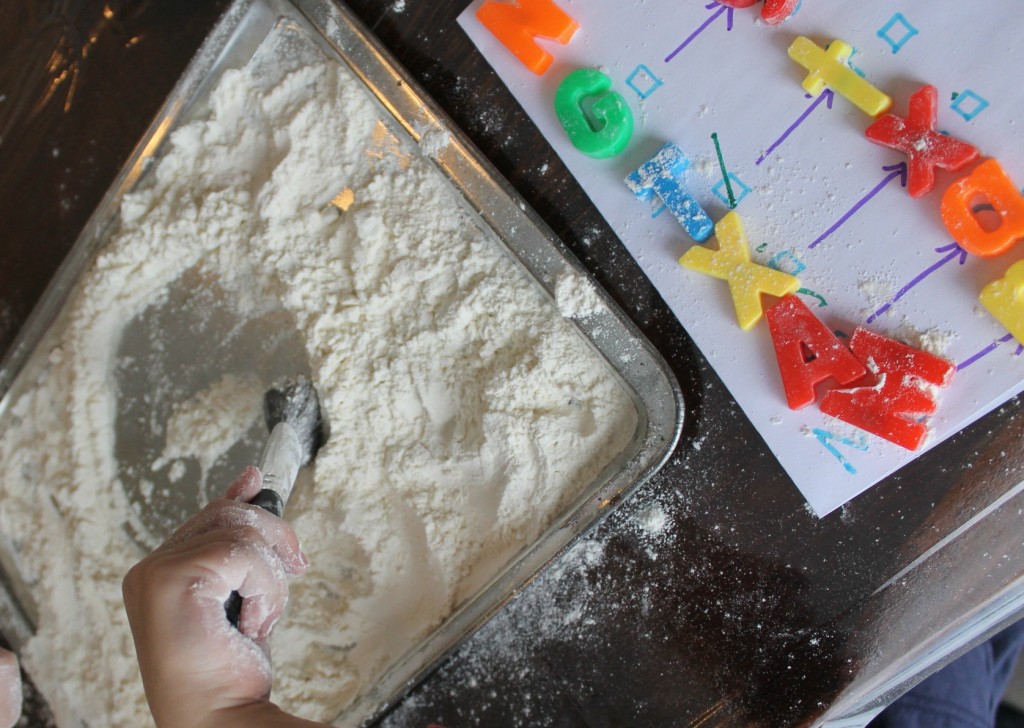 This was a fun way for Sammy to be introduced to uppercase and lowercase letters.  We used only a few letters, made it simple and easy, and a little messy too.

Matching upper and lower case letters will be our next venture in alphabet learning.  Slow and steady – we’ll get there!  Lots more letter matching games heading your way!

For more ideas on helping little ones learn all about the ABCs please check out my book: A Year of Educational Quiet Bins: The secret to peaceful days at home with kids.

This website uses cookies to improve your experience while you navigate through the website. Out of these, the cookies that are categorized as necessary are stored on your browser as they are essential for the working of basic functionalities of the website. We also use third-party cookies that help us analyze and understand how you use this website. These cookies will be stored in your browser only with your consent. You also have the option to opt-out of these cookies. But opting out of some of these cookies may affect your browsing experience.
Necessary Always Enabled
Necessary cookies are absolutely essential for the website to function properly. This category only includes cookies that ensures basic functionalities and security features of the website. These cookies do not store any personal information.
Non-necessary
Any cookies that may not be particularly necessary for the website to function and is used specifically to collect user personal data via analytics, ads, other embedded contents are termed as non-necessary cookies. It is mandatory to procure user consent prior to running these cookies on your website.
SAVE & ACCEPT
496 shares