It has been hard to keep Sammy inside for any length of time lately.  We have had quite a lot of snow for a good two weeks now – and I was sort of hoping the novelty would begin to fade.  I love being outside, but Benjamin, who is one, does not enjoy the snow.  I can’t really blame him – once he is bundled enough to be outside he can hardly move.  But little by little we are all getting used to our new outdoor surroundings!

Since it seems this love of the snow is not going anywhere anytime soon for Sammy (which is good I suppose as we have another 4 solid months of snow ahead!) I decided to bring some letter fun outside with this snowball toss game! 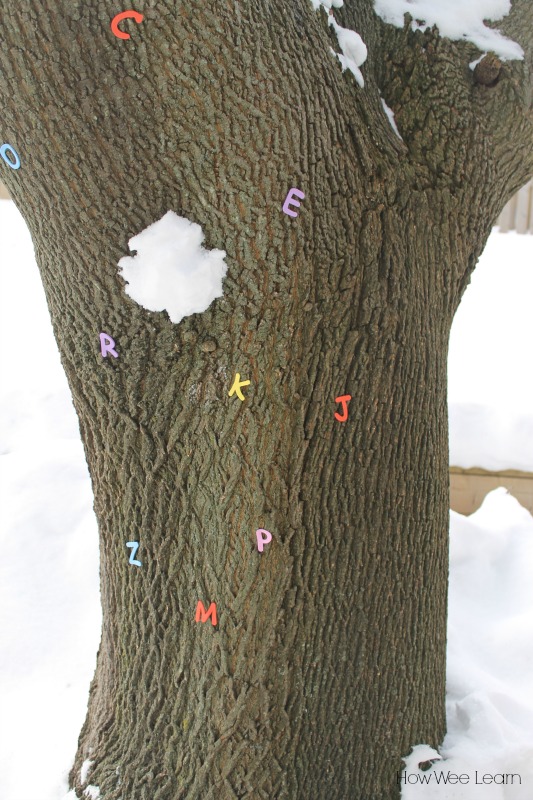 On our very first snowy day Madeline proudly showed Sammy how to make a super snowball.  What are big siblings for?  Mama of course was a bit cautious, reminding these wee ones of mine that snowballs shouldn’t be thrown at each other.  To which Sammy told me Daddy said they can be thrown at each other – but only below the neck … Well now …

Anyways, since Sam can now make a super snowball, and anything fine motor related is out the window because of the wooly mittens required, I decided we could do some letter learning with a snowball toss game.

I stuck some letters to our great big Maple tree in the backyard.  I tried to use many different colours (thinking we could always play a colour game next) and I used some letters Sam are still finding tricky.  They stuck perfectly, regardless of the fact that it was so chilly out.  They even stayed stuck when hit with the snowballs … which was not too often. 🙂 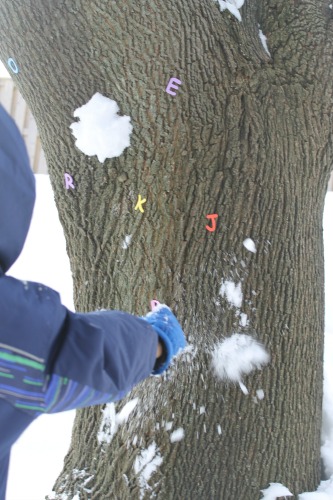 Next, we made some super snowballs and got to tossing!  We played together, because it was a really fun game and I wanted in.  I would aim for a letter, call it out, and toss … and more often then not, miss.  Which Sam found hilarious.  Then he would have a toss.  And on we would go.

This snowball toss game ended up being so much fun!  It was so simple and a fun way to practice those tricky letters. 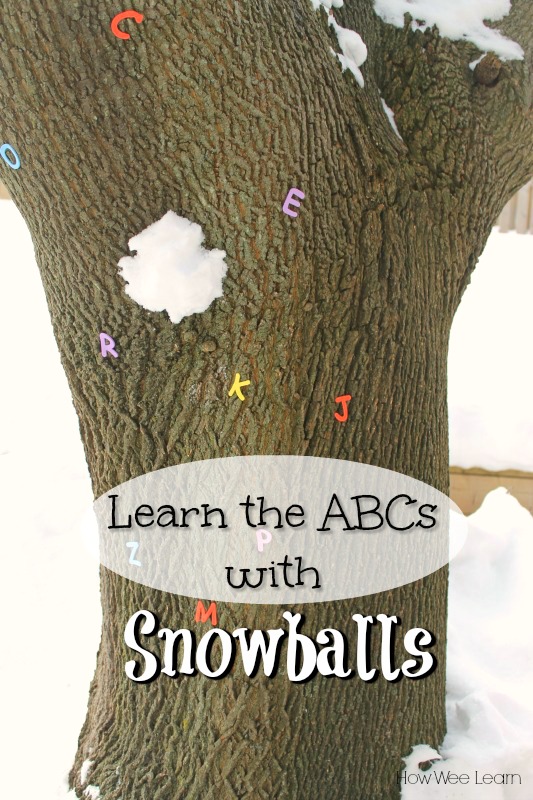 I do believe our snowball toss games have just begun!  Already I am thinking of different ways we could use this fun activity: colours, numbers, sizes, sight words …

Now I just need to think of fun activities for babes (who cannot really move due to the bundling, but want to move because they can now walk – thank you very much) to do outside in the snow.  Then we can all enjoy this Canadian winter!  That will be on my to-do list this week … and I will post it for your wee ones too!

This website uses cookies to improve your experience while you navigate through the website. Out of these, the cookies that are categorized as necessary are stored on your browser as they are essential for the working of basic functionalities of the website. We also use third-party cookies that help us analyze and understand how you use this website. These cookies will be stored in your browser only with your consent. You also have the option to opt-out of these cookies. But opting out of some of these cookies may affect your browsing experience.
Necessary Always Enabled
Necessary cookies are absolutely essential for the website to function properly. This category only includes cookies that ensures basic functionalities and security features of the website. These cookies do not store any personal information.
Non-necessary
Any cookies that may not be particularly necessary for the website to function and is used specifically to collect user personal data via analytics, ads, other embedded contents are termed as non-necessary cookies. It is mandatory to procure user consent prior to running these cookies on your website.
SAVE & ACCEPT
680 shares