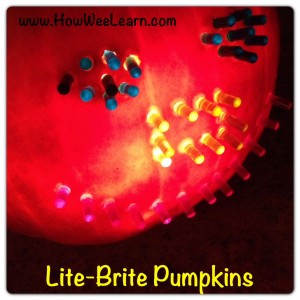 I had been thinking (already!) about Pumpkin carving ideas for my Sammy.  It is tough – pumpkin carving with a 3 year old.  They are too little to carve, but I knew Sammy would want to do more then paint.  So, as I was pondering, a light bulb went on (ha!) What about a Lite-Brite Pumpkin!

This pumpkin carving idea was so simple!  We cleaned out the pumpkin and scraped one side of the pumpkin (where I wanted the face) quite thin.  Then I used the end of a long, thin spoon to poke holes in the shape of the pumpkins eyes, nose, and mouth. 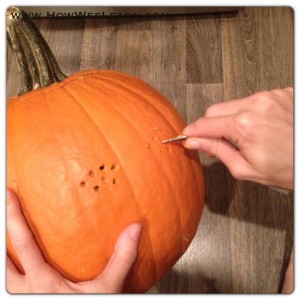 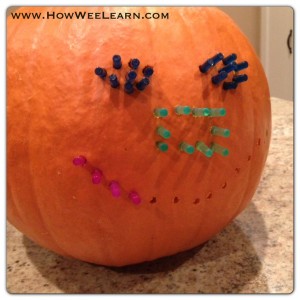 And then I put a flashlight inside … just to be sure …. oh who am I kidding – that was just for fun!! 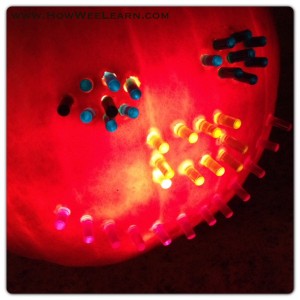 The picture really doesn’t do it justice.  It looks really neat!  The Lite-Bright pieces really glow perfectly – just like a Lite-Brite.

Then, I finally decided to share and gave Sammy the pumpkin and the Lite-Brite pieces. 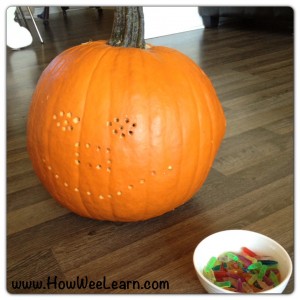 He loved it!  He was able to complete this pumpkin carving activity completely independently.  And it was an excellent activity for his developing fine-motor skills. 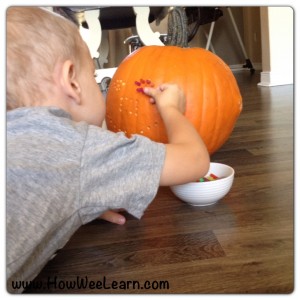 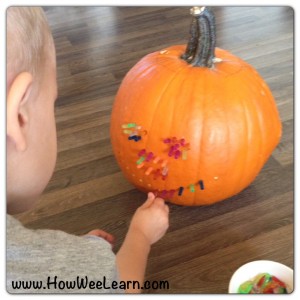 And great for his Self- Confidence … because he did it all on his own!!  We took it into a dark room so he could see it glow.  He was so excited. 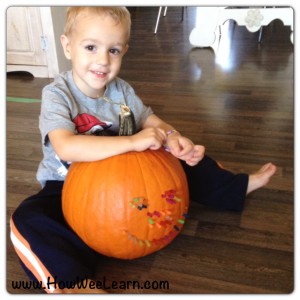 This was one activity that Sammy wanted to do again and again.  And the pumpkin has held up great!  So far he has put the Lite-Bright pieces in and out 3 times (and I have done it once … or maybe twice) and it still looks great. 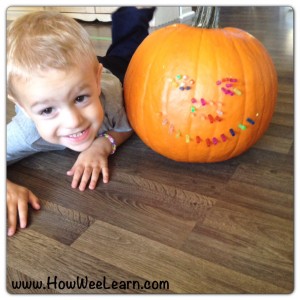 Pumpkin carving ideas for kids can be tricky and time consuming for parents.  This one still definitely took me some time (the scraping and poking) but it was well worth it in the end, as Sammy has easily spent 3 times as long playing with his pumpkin.

This website uses cookies to improve your experience while you navigate through the website. Out of these, the cookies that are categorized as necessary are stored on your browser as they are essential for the working of basic functionalities of the website. We also use third-party cookies that help us analyze and understand how you use this website. These cookies will be stored in your browser only with your consent. You also have the option to opt-out of these cookies. But opting out of some of these cookies may affect your browsing experience.
Necessary Always Enabled
Necessary cookies are absolutely essential for the website to function properly. This category only includes cookies that ensures basic functionalities and security features of the website. These cookies do not store any personal information.
Non-necessary
Any cookies that may not be particularly necessary for the website to function and is used specifically to collect user personal data via analytics, ads, other embedded contents are termed as non-necessary cookies. It is mandatory to procure user consent prior to running these cookies on your website.
SAVE & ACCEPT
44 shares