It all started so innocently. One paper hat. One single, little paper hat. How was I to know that an origami epidemic was about to happen?

It turns out origami is a rather addictive type of paper craft for kids. One hat turns into many, which turn into planes, frogs, and boats too. 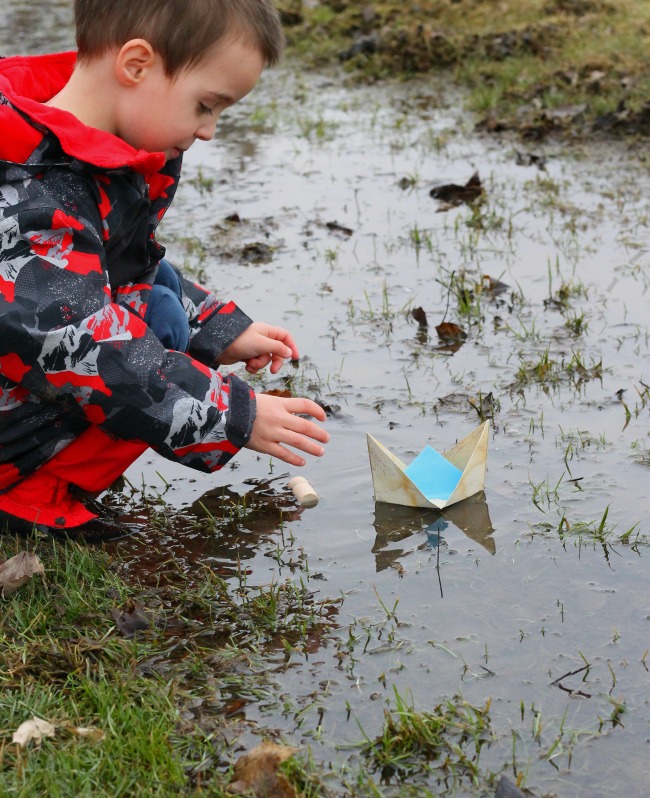 We found two different Youtube tutorials for making origami boats which Sammy could make all on his own.

We decided to experiment to see which would hold up best outside. Since it is officially spring we take every chance we can get to bring our learning outside. We all are in need of that warm sun and that fresh air.

Origami is such a great craft for my Sam. It requires concentration and attention to details, sequential steps, learning about symmetry and angles, and lots of rather big math concepts too. I have really been nurturing this interest – plus paper crafts for kids are just so simple to prepare. 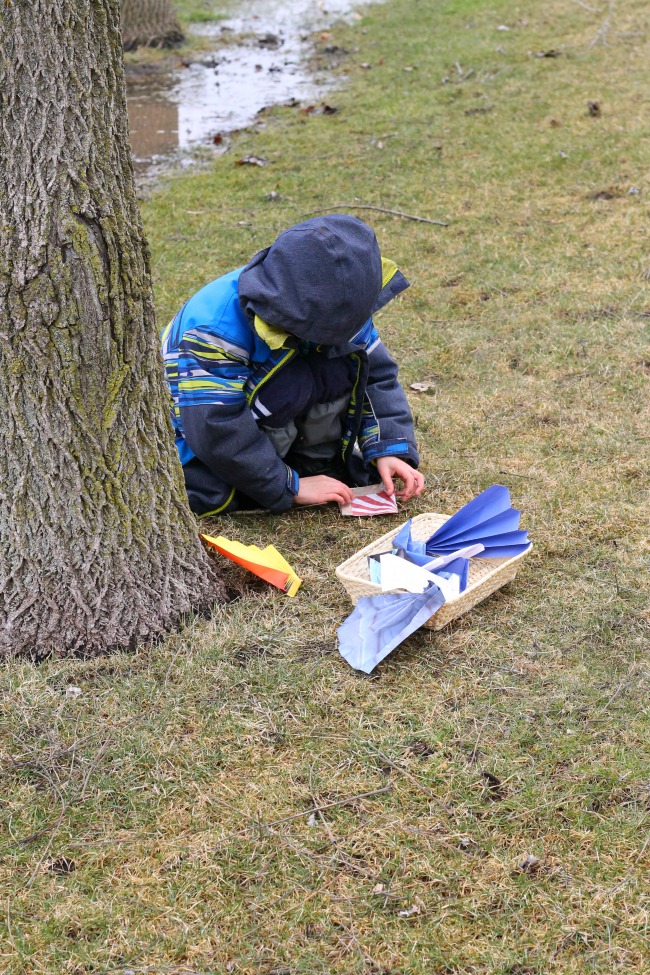 Ben of course wants to be a part of the origami crafting epidemic but at four, it is tricky for him to do on his own. Since we were bringing the boats outside to float, I thought we could make some paper fans to help move them across the puddle. This was a great craft for Ben to do. He could master that back and forth folding all on his own in just a few moments.

So we ended up with A LOT of paper fans.

Once we got ourselves outside and in the puddle we quickly realized the paper fans did not really work to move the boats along. Hmmm. 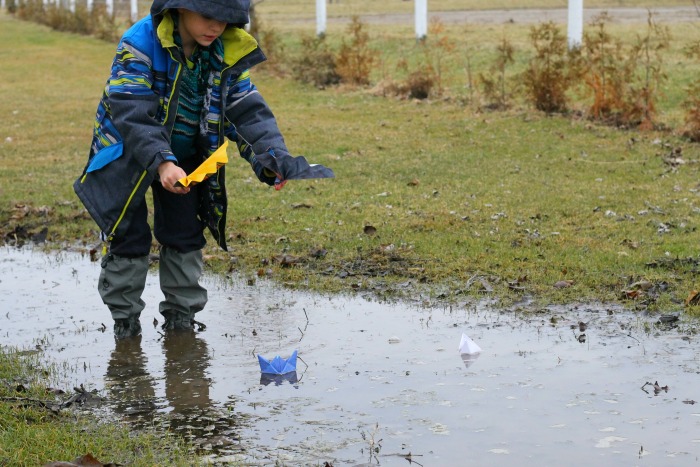 Pretty soon, sticks got to splashing, waves got to forming, and those boats got to moving. It was a careful balance, the boys discovered, because bigger waves moved the boats faster, but too big of waves sent the boats sinking. 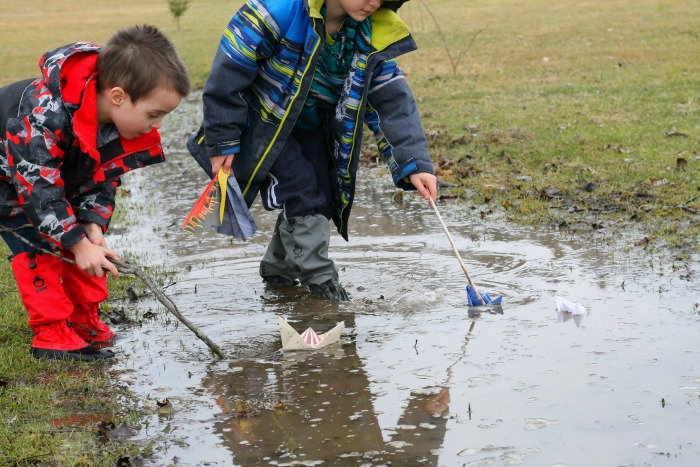 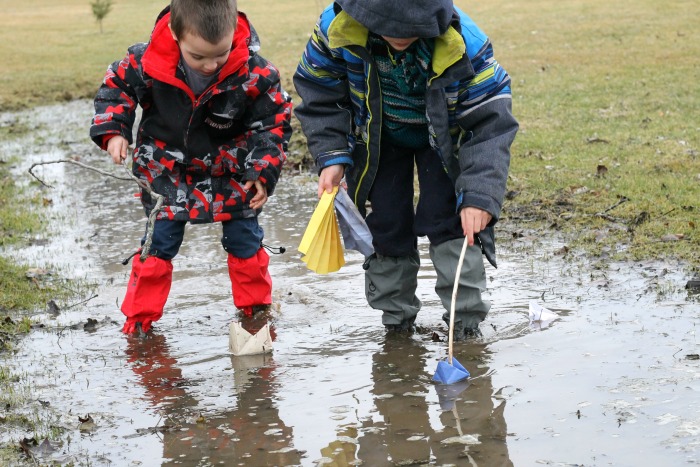 With just the right amount of pressure, it turns out that the boats could be lead and moved with a stick itself. 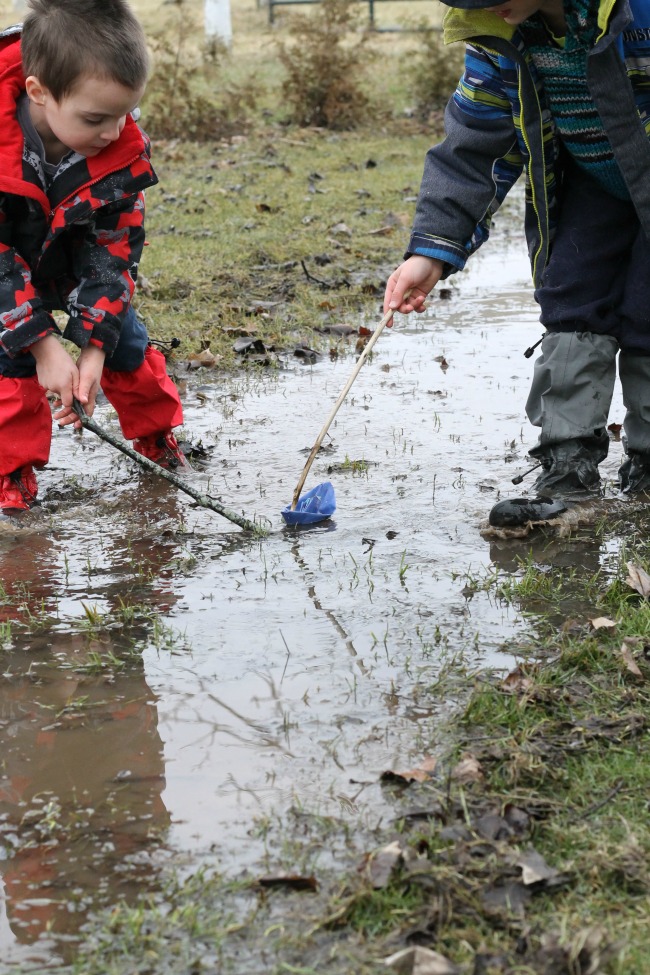 The thicker, smaller boats held up much better to the water. And as it turns out, the paper fans would actually float for awhile as well!

It never ceases to amaze me how much learning comes from exploring through play. To think of all the big and important learning topics we covered that morning – outside in a puddle.

We found a few origami books at the library and I thought I would share them with you, just in case you are interested in starting an origami crafting epidemic as well. These two books were nice and simple for my 6 year old to use on his own: 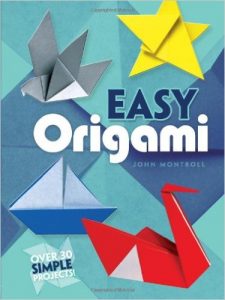 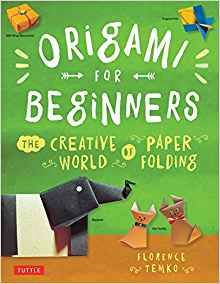 And the very best deal I have been able to find for origami paper is with Melissa and Doug’s Origami paper.  I had no idea how expensive this paper can be! But many of the projects we have done we have just used normal paper with fine success. I believe for more challenging projects with oodles of folds the origami paper is necessary, but for our current projects it doesn’t seem to be needed.

I hope you are having a wonderful week friends! Thank you so much reading – Happy Spring!

« Rhyming is Fun and Easy! Except When It’s Not…
I’m Taking My Kids Around the World… »

This website uses cookies to improve your experience while you navigate through the website. Out of these, the cookies that are categorized as necessary are stored on your browser as they are essential for the working of basic functionalities of the website. We also use third-party cookies that help us analyze and understand how you use this website. These cookies will be stored in your browser only with your consent. You also have the option to opt-out of these cookies. But opting out of some of these cookies may affect your browsing experience.
Necessary Always Enabled
Necessary cookies are absolutely essential for the website to function properly. This category only includes cookies that ensures basic functionalities and security features of the website. These cookies do not store any personal information.
Non-necessary
Any cookies that may not be particularly necessary for the website to function and is used specifically to collect user personal data via analytics, ads, other embedded contents are termed as non-necessary cookies. It is mandatory to procure user consent prior to running these cookies on your website.
SAVE & ACCEPT
32 shares