Alright – I told you I would post twice last week – I may have even used the ‘p’ word … but I didn’t.  We had another bad storm which made me unplug for a couple of days.  I do apologize, it seems best for me to not make promises about how often I will be in this space right now.  I truly hope to be here twice a week sharing ideas with you.  Truly.  But, I will at the very least be here once a week.  I promise (there I go again).

A few days ago I posted a picture of these sandpaper letters I was in the process of making for my little ones.  I asked your opinion on whether or not to paint them – and boy was that an informative post!  I had no idea that our Facebook community was so knowledgeable about tactile learning!  But let me start at the beginning. 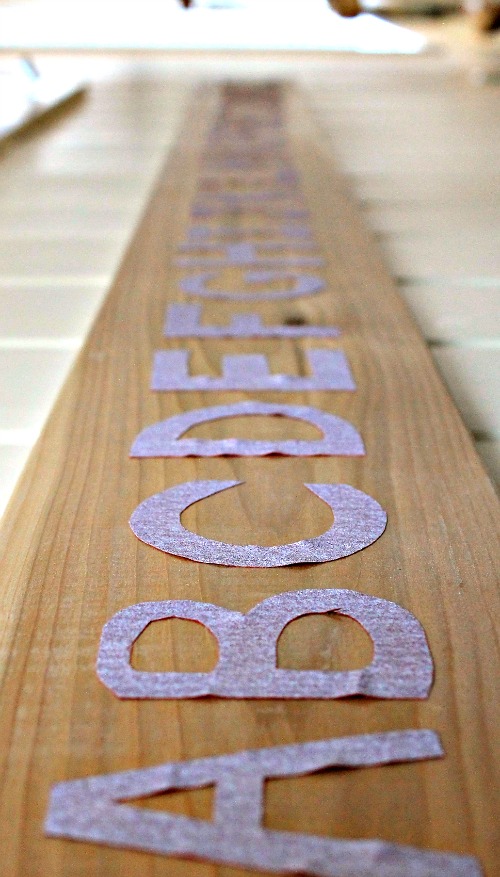 We have been working on the alphabet at home everyday.  I am focusing on capital letters first with my Sam (who is 4).  At this point he knows the names and is able to recognize all of his capital letters.  We have worked on these slowly over quite a long period of time.  Feeling confident that he was ready, I began introducing lower case letters.  This is how I usually do things, at least I have for the past 5 years of teaching.

But as soon as I began this with my Sammy confusion set in.  He was mixing up letters, even the capital letters he knew so well, and starting to get frustrated.  So we aborted that mission – at least for awhile.  After all, if kids don’t learn as we teach, perhaps we should teach as they learn, right?  Instead I decided to re-focus on the capital letters.  This time, I thought I would try to introduce the letter sounds.  And it is working MUCH better.

It seems my Sam is a visual, tactile, and kinesthetic learner.  He learns by seeing and feeling and doing things.  So by me changing the look of the letters completely but telling him they had the same sounds as the big letters it confused him greatly.  But by keeping the same visual look of the letters and just changing the sound they make he seems to be doing much better.  I thought I would help him along this path by adding in a tactile experience. 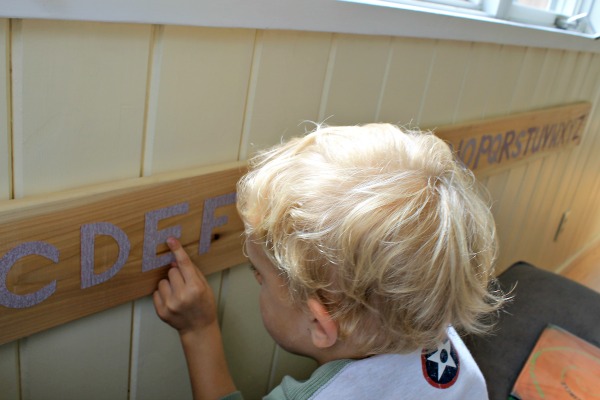 I had a similar set of sandpaper alphabet letters in my Kindergarten classroom when I was teaching.  And they are very simple to make – quite versatile too – so I decided to make a set for home.

Very simply I found a long piece of wood that we had in the workshop and claimed it for my own.  You’ve got to be quick around our place – everyone is always building something.  Then I found some very fine sandpaper.  I used two pieces of sandpaper.

I cut the sandpaper into small rectangles of the same size.  I cut each piece of my sandpaper into 4 strips, and then each strip into 4 again.  This left me with 32 rectangles.  Lots of extra for “just in case I mess up” pieces.  Because if I didn’t have extras I would mess up.  Since I did have extras of course, I didn’t.

Then I used scissors and cut out each letter.  I don’t really have trouble doing tasks like this.  My hubby does.  He informed me he would need to print off letters, trace them onto the sandpaper, and then cut them out.  So basically I am better than him.  🙂  Of course both ways get the job done, and truth be told his way likely would have looked much better.  That’s just not how I roll.

Then I placed the letters on the wood and looked at them for about 30 minutes.  I couldn’t decide if I should paint the wood first.  Or stain it.  Or somehow paint the sandpaper.  Or just the vowels.  Or …. you see where I am going.

So I did what most people in my situation would do, and posed the question to my lovely Facebook community.  Low and behold I had so many fantastic suggestions and ideas that I became even more confused.  I would read an idea and decide, “oh that’s brilliant, of course I will do it that way!”.  Then I would read the next comment and say, “well, that is very fascinating, I think I may do it that way.” and so on.  Eventually I became exhausted by all the brilliant minds on Facebook and went to bed.  It was at this point (about an hour and a half after I finished cutting out the letters) that my hubby stated he would have been done by now – even with all the added cutting and tracing – because he doesn’t use Facebook.  So, I suppose based on my previous knowledge, he is better.

The next morning I woke up confident.  I knew just what to do.  I opted to leave the letters and wood natural.  Since the entire point of this project was to give my Sam a tactile experience I didn’t want him to be distracted by his other senses.  Plus, this board was going up in our quiet area in the family room.  With loads of natural wood, so it would look lovely as it was.  And it does. 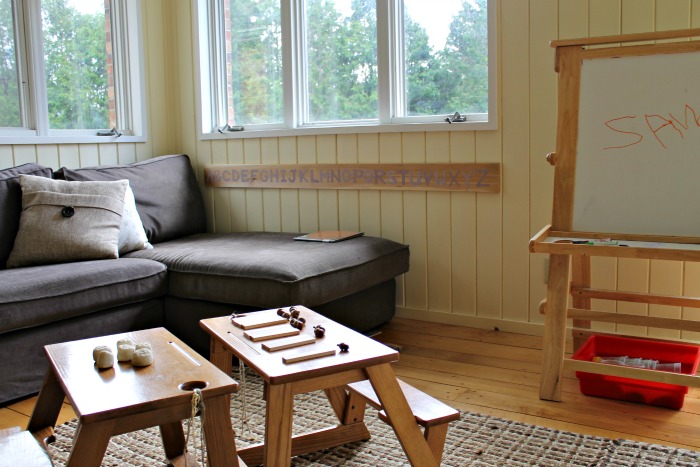 We have only used this board a few times, but so far I am very happy with how it seems to be working for Sam.  He seems to be learning the sounds easily and (most importantly) with no frustration.

And so we will leave the lower case letters for some time.  There is no rush of course.  All in his own time.

Please consider liking us on Facebook so we can share more creative learning ideas with you and your little ones!  Thank you.

This website uses cookies to improve your experience while you navigate through the website. Out of these, the cookies that are categorized as necessary are stored on your browser as they are essential for the working of basic functionalities of the website. We also use third-party cookies that help us analyze and understand how you use this website. These cookies will be stored in your browser only with your consent. You also have the option to opt-out of these cookies. But opting out of some of these cookies may affect your browsing experience.
Necessary Always Enabled
Necessary cookies are absolutely essential for the website to function properly. This category only includes cookies that ensures basic functionalities and security features of the website. These cookies do not store any personal information.
Non-necessary
Any cookies that may not be particularly necessary for the website to function and is used specifically to collect user personal data via analytics, ads, other embedded contents are termed as non-necessary cookies. It is mandatory to procure user consent prior to running these cookies on your website.
SAVE & ACCEPT
53 shares