I am always, always cold.

I also hardly ever, ever wear socks.

The combination of these two competing forces means that come winter we best have a lot of firewood.

The conversation about how much firewood we should have always goes something like this:

“I think 6 cords really would be enough. The neighbours have a bigger house and only get 5 cords” (ridiculous John)

“6 cords?! We will FREEZE. We will literally perish. That is the craziest thing I ever heard! Last year we had 10 cords and ran out!” (sensible me)

“Well, last year we kept the house at a balmy 30 degrees. Maybe this year we can use less wood and keep the house a bit cooler and you could, you know, maybe, wear socks?” (unbelievably ridiculous John)

“Last year was the coldest I have ever been. I mean in my entire 32 years on this planet. I think I even got frost bite while inside. If you recall I actually did even wear socks a few times! I really think we should just bite the bullet and go with a full 15 cords this year.” (calm and sensible me)

Or something along those lines. All of that is to explain why we have a lot of wood and stumps around here. I know I have been writing quite a few posts about the different ways we are playing with and creating with these big stumps, so I wanted to fill you in on why we are doing so. We are basically living in a stump house right now. We might have just ordered a smidgen too much wood. But don’t tell John I said that.

I decided to bring in a few stumps to let the boys get some hammering in. They really do love to hammer and stumps are great for this purpose because they are so sturdy. 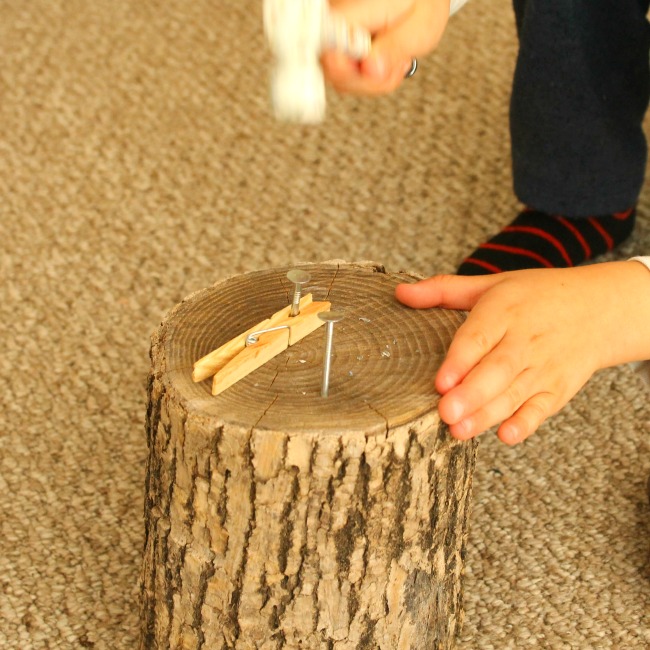 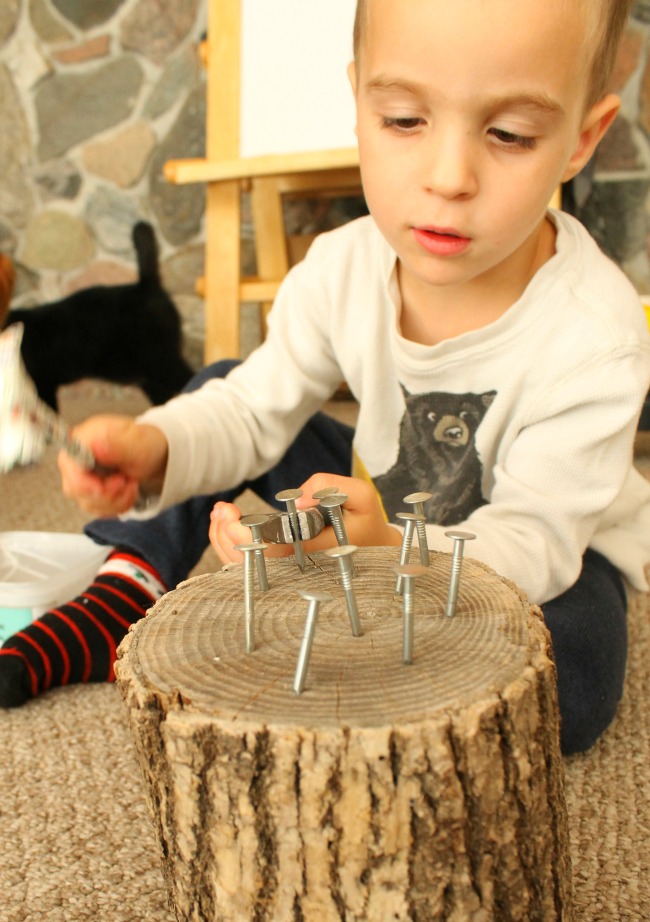 While they were hammering away I realized that if I hammered some nails in straight(ish) lines into a stump it would make a pretty cool geoboard. So I did … and it did! 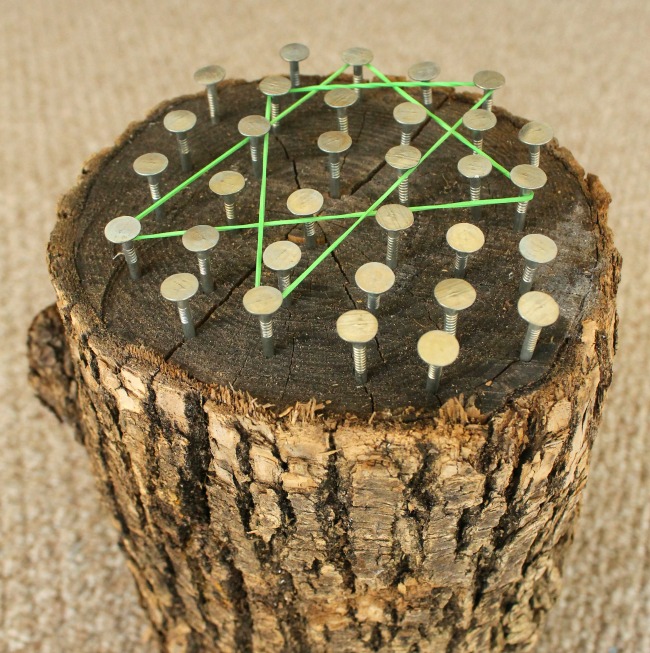 Sam opted to make his stump into a geoboard as well. 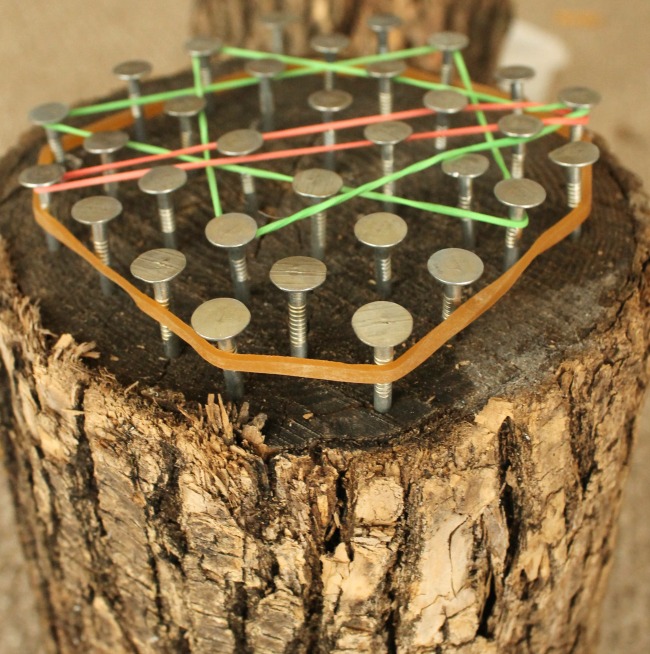 Ben opted to hammer in a bunch of nails so he could wrap elastics around to make a spiders web.

For his little friend.

Friend? Why yes Mama, there is a little spider on my stump and I am making his home even better!

Lovely of you Benjamin. And then we will put your stump outside because that friend of yours is actually not so tiny. Ahem. 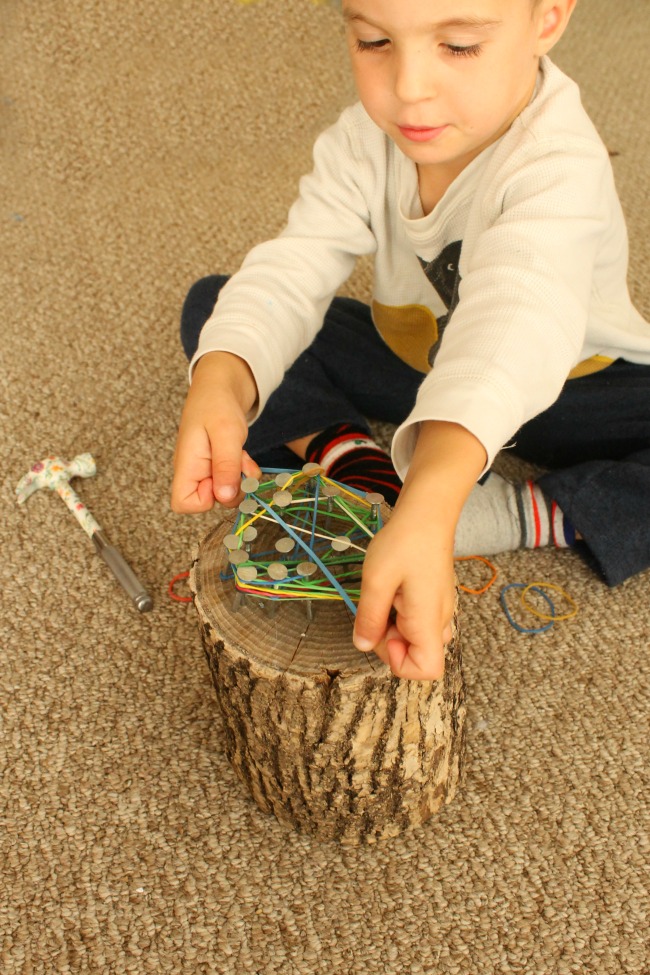 Anyways, the boys had a great time hammering in oodles of nails and then stretching and wrapping elastics to make different shapes.

I hope you had a wonderful weekend friends. Thank you so much for reading.

This website uses cookies to improve your experience while you navigate through the website. Out of these, the cookies that are categorized as necessary are stored on your browser as they are essential for the working of basic functionalities of the website. We also use third-party cookies that help us analyze and understand how you use this website. These cookies will be stored in your browser only with your consent. You also have the option to opt-out of these cookies. But opting out of some of these cookies may affect your browsing experience.
Necessary Always Enabled
Necessary cookies are absolutely essential for the website to function properly. This category only includes cookies that ensures basic functionalities and security features of the website. These cookies do not store any personal information.
Non-necessary
Any cookies that may not be particularly necessary for the website to function and is used specifically to collect user personal data via analytics, ads, other embedded contents are termed as non-necessary cookies. It is mandatory to procure user consent prior to running these cookies on your website.
SAVE & ACCEPT
2504 shares