It is hard for me not to push (in a helpful and well-meaning way) to have him learn his ABCs.  It’s especially hard when I chat with other Mamas and hear how their little ones know all of their letters, can read, and have written their first novel …

But I don’t.  I take a deep breath, accept him for the creative and wild little man that he is, and provide him with opportunities to learn. 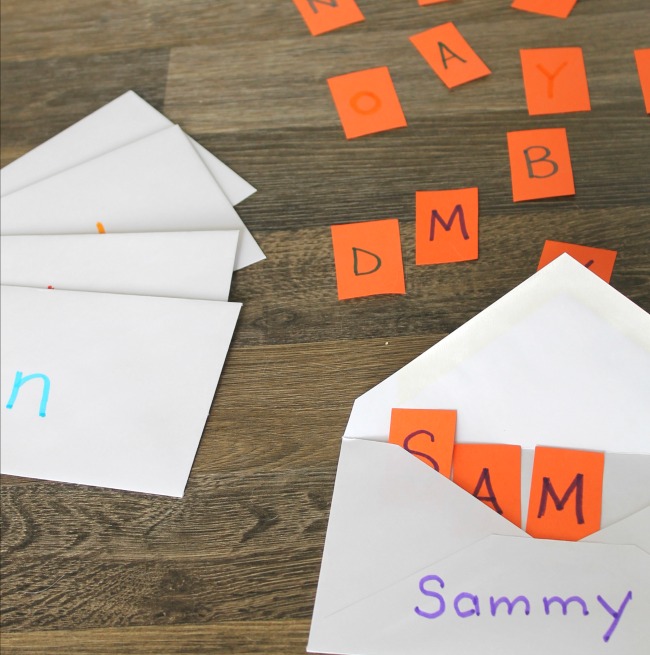 We have bean bag letters in the toy box, put painter’s tape letters on the floor, and we read a lot.  Through play, he now has a handle on the uppercase letters of the alphabet.  You can see the alphabet recognition activities we played to have fun and introduce that first step to alphabet learning.  Our next step is matching uppercase and lowercase letters. 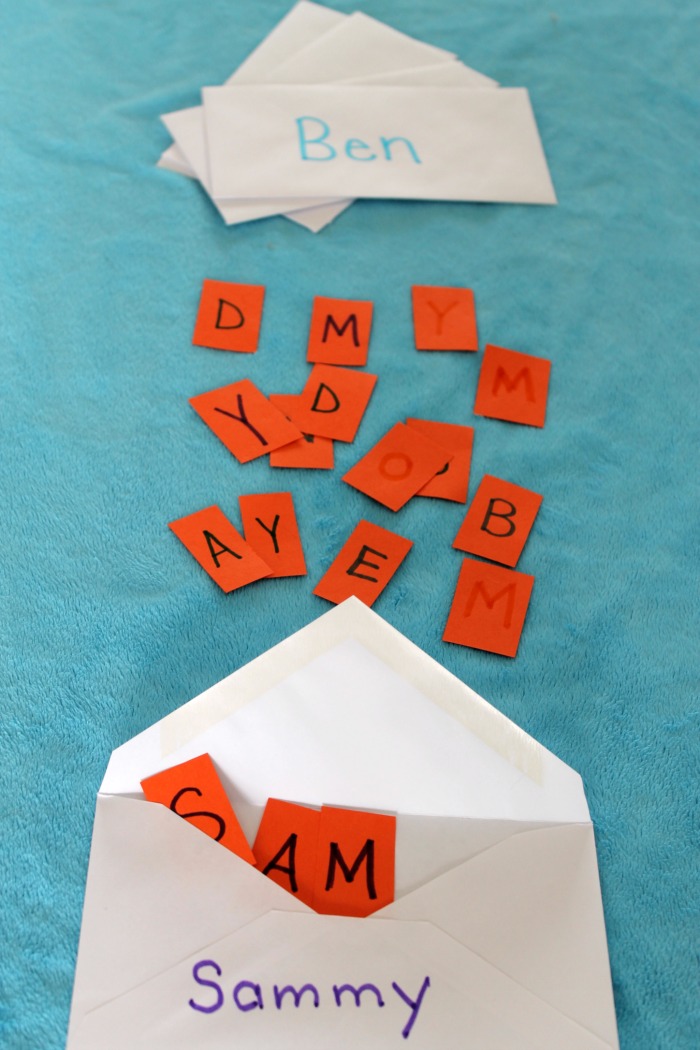 I introduced the idea of matching uppercase and lowercase letters to Sammy through this simple letter matching activity.  I did it this way so he would look at each detail of the letter and begin to recognize the fact that there are two shapes for each letter – one uppercase (or big) and one lowercase (or small).   Throughout the week he was noticing lowercase letters in books and in print all around him.  It seems he has started to show an interest in alphabet learning, so I am treading lightly and cautiously as we move on … only a few small steps away from his first novel … 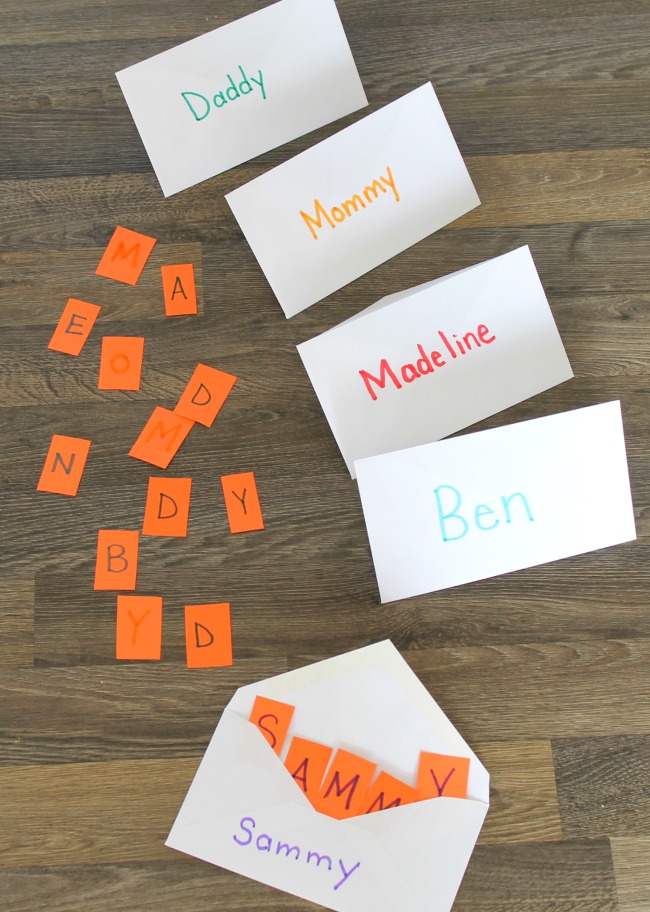 Much like I introduce alphabet recognition by starting with my little one’s name, I introduce lowercase letters with names too.  We made this introduction into a post office game … because my Sammy loves to play mail games!

I started by writing the names of everyone in our family on envelopes the way you would normally write a name—uppercase for the first letter and lowercase for the rest.

Then I wrote each letter for each name on little squares of paper in uppercase letters. 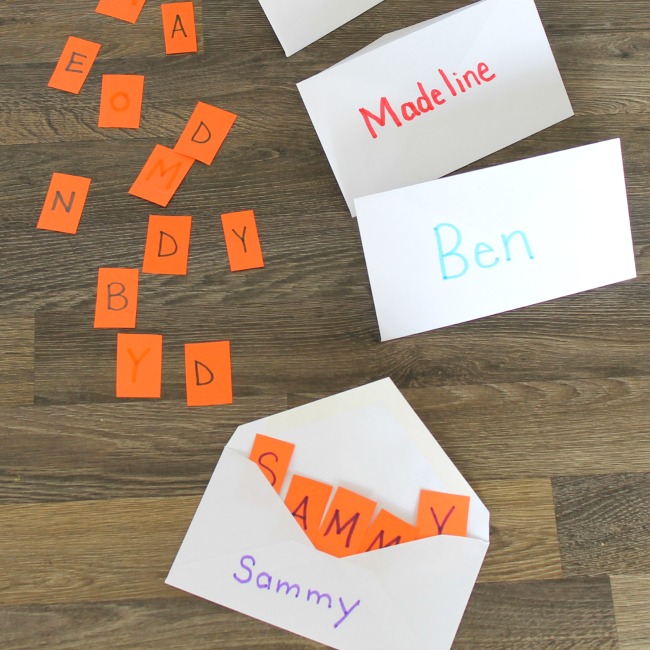 To make this matching game a bit less intimidating I wrote each name in a different colour.  Mommy was written in Orange, and each uppercase letter for MOMMY was also written in orange.  This helped Sammy when he got stuck on a letter. 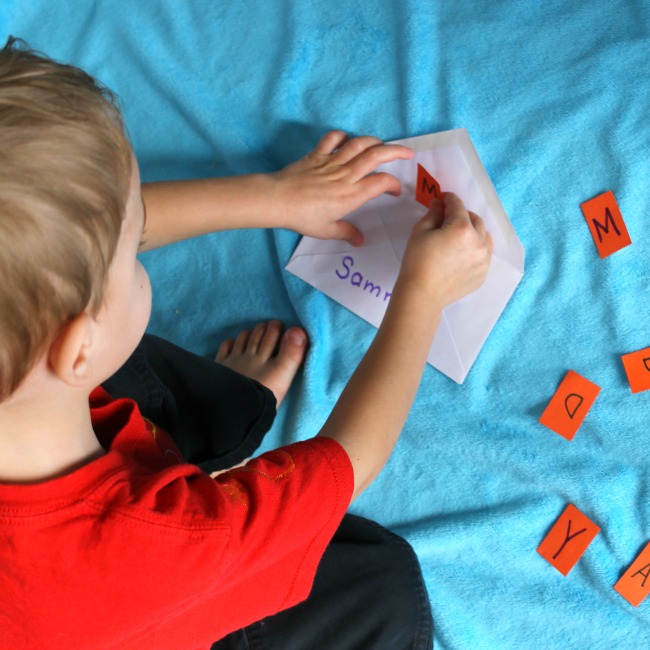 Madeline made up a cute story to go with this game.  She told Sam that she was delivering letters to her family when she got spooked by a great big dog.  She dropped all of the envelopes and all of the letters inside got mixed up.  Sammy really loves stories and make-believe play, so this helped him really engage in the activity.

I am a big believer in giving kids the time they need to learn.  I am truly in no rush for Sam to learn his alphabet, learn to write, or learn to read.  I provide him with the opportunities, but if he is not interested I never push.  We read each day and we talk a lot.  Really, that is all my little one needs.

Thank you for reading friends! I hope you are having a lovely week.

« GIVEAWAY! How to Help a Colicky Baby in 5 Steps!
Letter Flowers »

This website uses cookies to improve your experience while you navigate through the website. Out of these, the cookies that are categorized as necessary are stored on your browser as they are essential for the working of basic functionalities of the website. We also use third-party cookies that help us analyze and understand how you use this website. These cookies will be stored in your browser only with your consent. You also have the option to opt-out of these cookies. But opting out of some of these cookies may affect your browsing experience.
Necessary Always Enabled
Necessary cookies are absolutely essential for the website to function properly. This category only includes cookies that ensures basic functionalities and security features of the website. These cookies do not store any personal information.
Non-necessary
Any cookies that may not be particularly necessary for the website to function and is used specifically to collect user personal data via analytics, ads, other embedded contents are termed as non-necessary cookies. It is mandatory to procure user consent prior to running these cookies on your website.
SAVE & ACCEPT
1017 shares