I realized that I hadn’t written a blog post about painter’s tape activities recently.  When I looked through my blog posts, I noticed that most of my posts involving my beloved green tape took place last winter.  Rather fitting when I think about it.

With the chilly, chilly weather our time spent inside increases, and my desire to get my little ones moving (with a purpose) grows.  Since they don’t stop moving, purpose is good.

These little ones of mine, like most, really, need to keep their little bodies moving.  From the moment they wake to the moment they rest they seem to be in constant motion.

So I know that for them to be engaged in any sort of learning activity, they must be moving.  Generally in the summer this is accomplished in many ways: with playdough, card games, buttons, you name it.  But in the winter, they like to REALLY move.

And enter to save the day (yet again) my roll of painters tape.  Oh, and the trusty sidekick coffee. 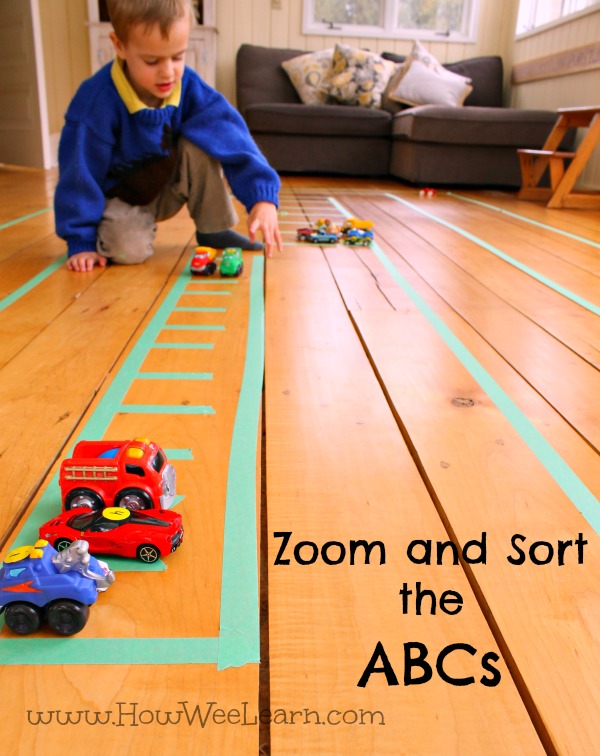 I made a great big racetrack (sort of) maze(ish thing) using the same method I did for our “a-maze-ing letters learning game” just on a much (much) bigger scale.

The boys played with this racetrack for a long time.  Initially there was some crashing and blocking, but with some swift rules established (and enforced – more than once) the racetrack was a success. 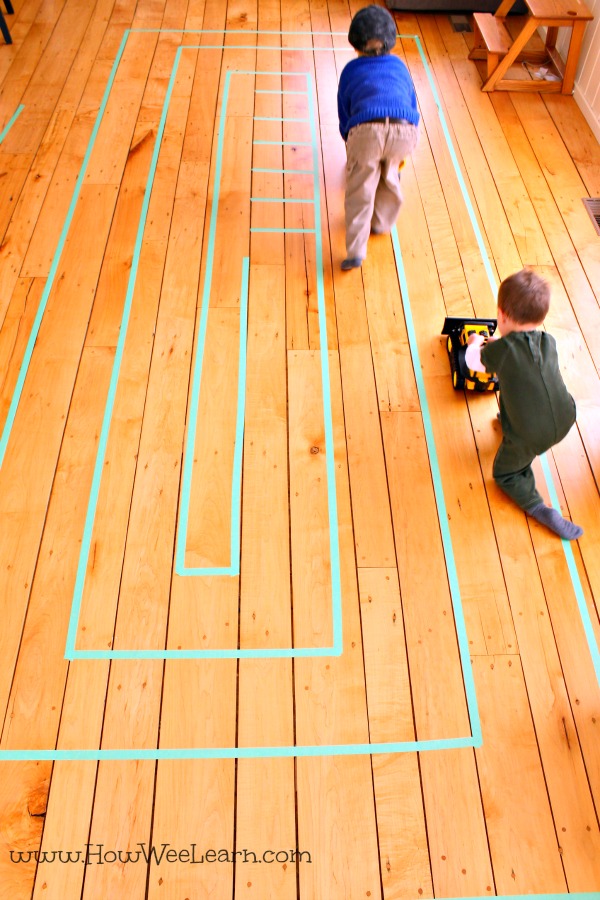 Big diggers and dozers were being pushed and pulled and little muscles were getting used and tired out.

I was pretty happy with this activity just like this, truthfully.  But then Sam suggested we practice the alphabet after lunch.

We are playing our way through learning the alphabet, and right now we are working on lower case letter recognition.

I grabbed some little cars and popped some stickers on top (post-it notes would work too).  I then labelled them with different upper case or lower case letters.

I wrote the entire alphabet, upper and lower case, on a chalkboard so Sam could refer to it as needed. 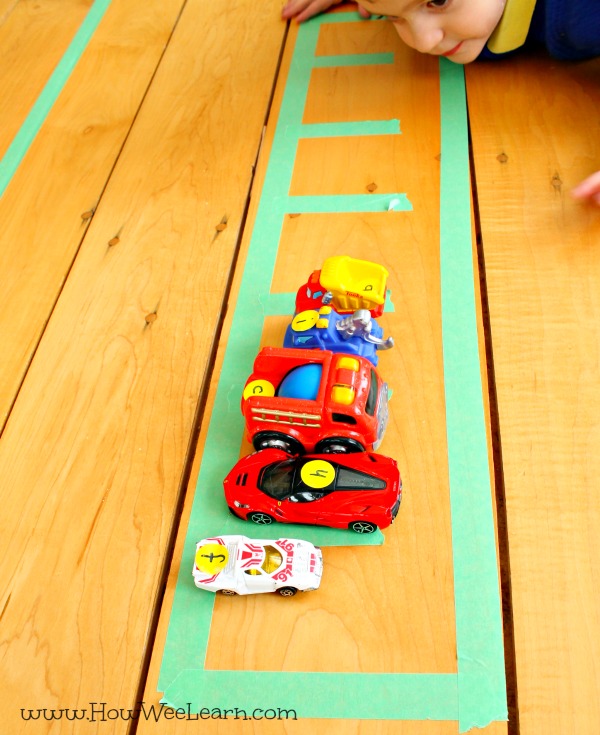 We just used about 15 cars or so, as I thought more would be overwhelming.  I had thought we would do the activity again after using different letters, but this game morphed into something else near the end and Sam contentedly learned and played in his own way.

I’ve learned that when my little ones decide to take an activity in a different direction it is almost always best to let them.  They are little and creative and full of ideas.  The learning that takes place when they are in charge of their learning is amazing.

While we were playing this game Sam would find a car with his ‘tow truck’ (though it was a dump truck), pick it up, decide on the letter and determine if it was an upper or lowercase version.  If he had trouble with this he would bring it over to the chalkboard to decide.  After, he would deliver it to the proper parking spot.

Sam decided it would be easier to erase the letter once he found it.  So he did. 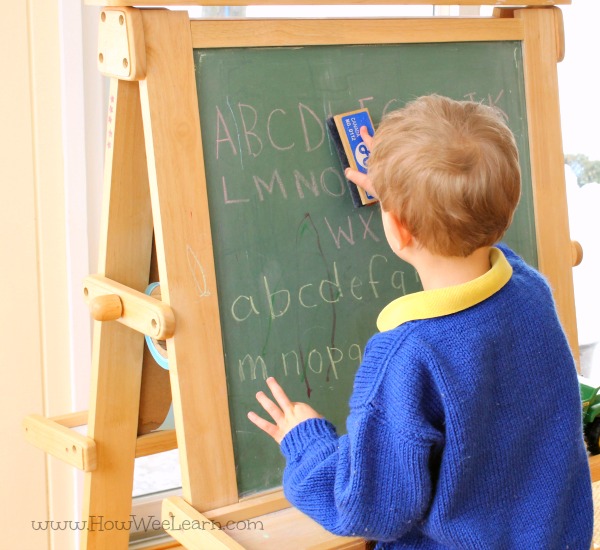 He also did some problem solving when he discovered certain letters that looked the same in both the uppercase and lowercase form.  For the letter ‘c’, after some careful consideration (of which I cautiously bit my tongue and simply observed), he decided it could be either the capital or the lowercase letter, so he placed it in between the two parking lots.

Later, when he found the second car with the letter ‘c’ on it he compared them and decided one was bigger, so placed that one in the big parking lot spot.

Learning like this is so meaningful.  When children are presented with a problem to solve and manage to work through it independently, that learning is far more likely to stick.

This activity was so simple to set up, and can be used to learn almost anything. From names to sight words to numbers!

Please consider following along with our over 250 000 Pinterest followers so we can share more creative learning activities with you and your little ones!  Thank you.

This website uses cookies to improve your experience while you navigate through the website. Out of these, the cookies that are categorized as necessary are stored on your browser as they are essential for the working of basic functionalities of the website. We also use third-party cookies that help us analyze and understand how you use this website. These cookies will be stored in your browser only with your consent. You also have the option to opt-out of these cookies. But opting out of some of these cookies may affect your browsing experience.
Necessary Always Enabled
Necessary cookies are absolutely essential for the website to function properly. This category only includes cookies that ensures basic functionalities and security features of the website. These cookies do not store any personal information.
Non-necessary
Any cookies that may not be particularly necessary for the website to function and is used specifically to collect user personal data via analytics, ads, other embedded contents are termed as non-necessary cookies. It is mandatory to procure user consent prior to running these cookies on your website.
SAVE & ACCEPT
274 shares